Costs for the supermarket giant's underpayment of salaried team members has blown out above the company's initial $200 million to $300 million estimate, leading to a drop in overall net profit for the first half of the financial year.

In a statement to the market on Wednesday morning, Woolworths revealed its total payment shortfall to its salaried team members was $315 million, $15 million above initial estimates, with investigations ongoing. 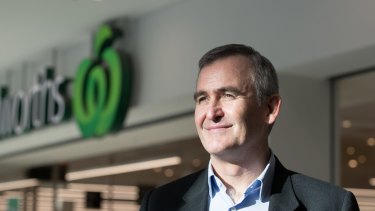 Costs for Woolworths underpayment has blown out beyond expectations.Credit:Janie Barrett

The underpayment scandal also hit the supermarket's bottom line, with group net profit after tax down 7.7 per cent at $887 million, damaged by an $80 million provision for remediation costs and $51 million in costs from the Endeavour Group demerger.

Woolworths also retroactively adjusted its profit and loss statements for prior trading periods to reflect the impact of its staff remediation, including a $52 million drop in earnings for the prior financial year.

A total of $69 million in backpayments were made to staff in the first half.

Total net profit after tax, before significant items such as underpayments and discounting the impact of a new accounting standard came in in line with analyst expectations, at $1.36 billion for the half.

Struggling department store Big W posted its first profit growth since 2016, contributing $50 million in earnings before interest and tax, with comparable sales up 3.2 per cent as the company picked better product ranges and kept prices low.

Comparable sales at the business' soon to be demerged Endeavour Drinks division grew 1.7 per cent and EBIT increased 6.7 per cent to $338 million, largely driven by growth in the company's own-brand liquor division Pinnacle. Costs of $51 million relating to Endeavour's demerger were also booked.

Woolworths chief executive Brad Banducci said the half was positive but had many "material challenges".

"While some of the challenges will continue to be felt in the second half, as a business, we also have a lot to be positive about as we look forward to moving from ownership to partnership with Endeavour Group, building out the Woolworths Group digital retail ecosystem and working with our partners and other stakeholders to create a better tomorrow," he said.

However, trading for the new year was muted, Mr Banducci warned, with total sales growth of just 3 per cent and comparable sales of just 2 per cent.

Final calculations of Woolworths' underpayments will involve a "substantial volume of data", Mr Banducci said, warning the total underpayment provision could change in the future.

"Determining the historical payment shortfall requires consideration of numerous clauses of the [general retail award], which translates into over 2,000 decision rules for the purposes of the Group’s analysis, across each year, for every current and former team member," he said.

"Changes to any of these variables have the potential to result in a future adjustment to the provision in subsequent periods as analysis and work continues."

Woolworths announced an interim dividend of 46¢ a share, up from 45¢ in the prior corresponding half, payable April 9.