Home » World News » Will WA have to lose forests to fuel a renewable energy future? 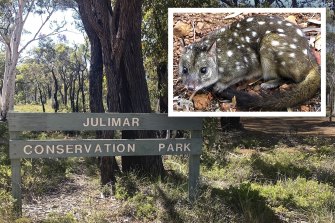 Mining interests border and transect the Julimar State Forest an hour’s drive from Perth. The forest is one of the strongest refuge’s for the threatened species chuditch, a type of quoll.

About an hour’s drive south from Perth is the Julimar State Forest.

The 29,000-hectare conservation park was logged until the 1970s but has been left alone since as an important refuge for threatened species like the Carnaby’s cockatoo and the chuditch – otherwise known as the western quoll, Western Australia’s largest marsupial carnivore.

At the northern extremity of WA’s jarrah forests, the park finds itself in a unique situation as it faces the risk of ecological collapse from a drying a climate, while also being on the front line of the search by miners for the rare metals needed in the global energy transition to renewables.

Underneath the forest lies what could be the nation’s greatest modern mineral discovery of critical minerals that are important for defence and new energy technologies.

Nickel and cobalt, used in electric vehicle batteries, are among the minerals present in the Julimar complex, a 26 kilometre-long anomaly that runs through the state forest and the Bindoon Training Area military facility.

But the big interest comes from the platinum and palladium. The two metals can be used in green hydrogen production, but palladium is in short supply with most of it coming from Russia, currently a global pariah due to its war with Ukraine.

Interest in critical minerals and their initial discovery on the doorstep of Perth saw miner Chalice’s share price rocket up the ASX from 17c in March, 2020, to more than $10 in November last year.

The southern end of the Julimar complex, covering about 2 kilometres of the find and known as the Gonneville deposit, is on private land snapped up by Chalice as the company splashed more than $35 million on farms bordering the forest.

Gonneville itself is a Tier-1 discovery, which means it’s a company-making mine with a long-term revenue outlook. But just across the border in the state forest, aerial surveys have picked up signs of what could be an even more promising resource.

This target area is called Hartog, covering about 2000 hectares with its Baudin target area, but until recently Chalice had limited access for exploration drilling. 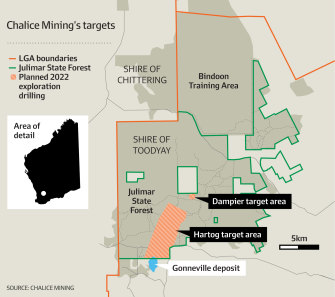 The forest was made an interim conservation park in 1994 and has been earmarked by government ever since to be turned into an A-class reserve, which would mean any mining activity would require parliamentary approval, yet this has never come to fruition.

Still, Chalice was limited to drilling along existing service tracks in the forest and saw its share price drop as the overall market fell, finding itself in a lengthy wait as an appeals process against a permit awarded by the Department of Mines, Industry Regulation and Safety took months to complete.

Both DMIRS and the appeals convenor found the proposed exploration to be inconsistent with several clearing principles. The convenor also noted significant concerns with the proposal and a high risk of dieback, a devastating plant disease, being introduced.

In the end, Chalice was allowed to clear 4.4 hectares of vegetation for 70 drill sites as part of its initial exploration program in an area where the forest is considered to be in excellent condition.

The Shire of Toodyay was one of the appellants and its president Rosemary Madacsi said the added exploration conditions imposed was a welcome compromise, but further applications in the forest were still a concern.

She said the local government still wanted to see the forest become an A-class reserve, which is one step below a national park.

“The original integrity of the Julimar Forest cannot be restored once lost,” Madacsi said.

“We have a duty to ensure our community is not poorer for our stewardship and believe that contemporary mining technology has the ability to deliver such an outcome.”

Chalice managing director and chief executive Alex Dorsch told WAtoday the company understood there were sensitivities around mining methods, but it was too early to say what activities might actually occur in Julimar, with no mineral deposits yet found. 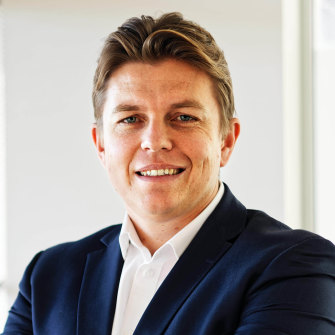 “However, we strongly believe that exploration needs to happen in the small prospective part of the state forest so that then we have all the information to weigh up mining of critical minerals and assess the environmental impacts,” he said.

WA-based Argonaut analyst Royce Haese said Chalice still had a way to go on getting approvals for any further drilling programs in the forest.

“It has taken around two years for Chalice to get approvals for this low-impact drilling, the next step is going to be a resource-scale drill-out which will likely require clearing, so another round of approvals,” he said.

But Dorsch has talked up the willingness of the WA government to allow for mining in state forests in the past, although his examples – such as Boddington gold mine, Alcoa and South32’s bauxite operations, and the Greenbushes lithium mine – were all started or approved decades ago.

Chalice has a lot of different community groups and environmentalists to try and win over as it looks to get the Julimar project off the ground.

The region once roamed by WA’s most infamous bushranger, Moondyne Joe, is now full of hobby farms and picturesque towns like Toodyay, popular with treechangers for its closeness to the city.

Gary Edwards, who lives in the broader region, is the acting president of the Avon and Hills Mining Awareness group and does not want to see any open-cut mining, as opposed to underground.

He says an open-cut mine in Julimar would be a disaster for conservation areas.

“The conservation park is one of the last relatively intact forests of its type in WA and is unique in the rare flora and fauna that it hosts; any intrusion such as this drilling program and future mining is a significant threat to that rare habitat,” Edwards said.

He says remaining landowners near Gonneville are also concerned about dust impacts from any future mining operations.

The environmental values of Julimar State Forest are considered exceptional.

Carnaby’s cockatoos breed in the forest and it is one of a handful of reserves left where you can find the woylie, a small marsupial that digs for fungi at night.

It is also home to the largest surveyed population of wild chuditch remaining in Australia.

The spotty coated chuditch is about the size of a cat and was once found across 70 per cent of Australia.

Now it consists in just 5 per cent of its original range after steadily disappearing over the past 200 years due to habitat removal, hunting by humans and the introduction of feral predators.

Even though fox baiting programs have helped recovery and new populations are being established through translocation to sanctuaries and other states, the species is still considered vulnerable.

The appeals convenor for Chalice’s exploration application also noted fragmentation of good habitat from agricultural, residential and mining development had significantly contributed to the chuditch’s decline in the south-west of WA.

Curtin Institute for Biodiversity and Climate director Grant Wardell-Johnson said Julimar was “one of the jewels in the crown of the northern jarrah forest”.

“It’s not well known but it’s a beautiful and important place, it certainly shouldn’t be given away to vested interests,” he said.

Julimar just the tip of the Yilgarn iceberg

The arm wrestle between local environmental concerns and mining rare metals in sensitive areas to slow climate change is a rising global challenge.

Mining giant Rio Tinto was rebuffed in Serbia when concerns were raised around farmlands and water near a potential lithium project.

In WA, the federal government stopped a massive solar and wind renewable energy project from going ahead in the Pilbara because of the impact it could have had on high-value wetlands.

The issue will only become more heated in the coming years as exploration heats up in the south-west in areas where critical metals have not previously been looked for.

Chalice’s quick rise up the ASX chart has prompted a flood of juniors to stake exploration claims near Julimar and elsewhere. 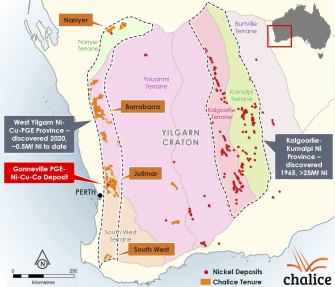 At investor and industry conferences, Dorsch has spoken about the idea of there being a whole new province with prospective resources along the western edge of the Yilgarn Craton – a large and ancient piece of the Earth’s crust that makes up a big chunk of the WA landmass.

Dorsch told WAtoday as the world went to net-zero carbon emissions huge quantities of green metals would be needed.

“It’s important to remember that if we don’t tackle climate change immediately, by increasing the supply of green metals and deploying green technologies rapidly, the entire ecosystem of the planet will come under strain,” he said.

The spending on exploration for base metals – such as copper and nickel – recently eclipsed iron ore in WA for the first time since 2007.

That exploration spend for base metals also hit a record peak in the December quarter at $151 million.

As global demand rises for critical minerals, Haese said the balancing act of decarbonisation and the role mining had to play in it was critically important going forward.

“We basically need to double copper production over the next few years to have any chance at reaching renewables targets, and that’s just copper,” he said.

“You look at knocking down a tree tomorrow versus greenhouse gas emissions, one is very visible, but one is ultimately going to have a bigger impact in the long term.”