A skit on Saturday Night Live took on explaining the concept of nonfungible tokens, or NFTs, and crypto art.

The show breaks down the meaning of NFTs to a parody of Eminem’s “Without Me.”

In the skit, hosted by former cast member Maya Rudolph, Kate McKinnon plays US Treasury Secretary Janet Yellen. The former Federal Reserve chair presents to a college class when a student played by Pete Davidson asks her what an NFT is:

NFTs have captured the spotlight in recent months with eye-catching sales. In the past month alone, crypto art sales have brought in over $1 billion, according to NFT marketplace CryptoSlam.

Earlier in March, digital artist Beeple made history when he sold a crypto art piece for $69.3 million. Other high profile figures including Grimes, Steve Aoki, and Jack Dorsey have also sold NFTs for millions of dollars.

NFTs operate as unique digital assets that can be bought online using cryptocurrencies, including ether and WAX. The tokens can include anything from art to sports highlights, cat videos, memes and even individual tweets.

When you buy an NFT in most cases you’re not buying content, but rather a token that connects your name with the creator’s art on the blockchain. If someone buys a image or meme, they can own it on the blockchain, but they have no control over rights to its distribution.

Read more: What you need to know about NFTs, the collectible digital tokens that are selling for millions online

After Davidson’s character, dressed as Batman’s sidekick Robin, poses the question to Yellen, she does not immediately answer. Instead, she directs his question to the other students.

Chris Redd, who plays a character reminiscent of The Matrix’s “Morpheus,” and guest star Jack Harlow, dressed as a janitor, each attempt to explain the concept of NFTs through the Eminem rap.

The skit ends when the group becomes part of an NFT, taking on the The Beatles’ famous Abbey Road poses. 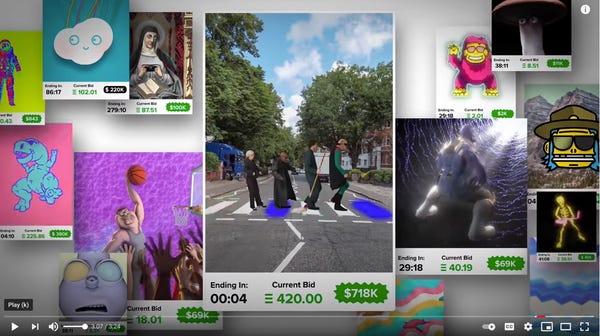 The skit gained a lot of traction on Twitter, where crypto investors, including Tesla CEO Elon Musk, interacted with the video.

NFT investor and Tron CEO Justin Sun tweeted in response to Saturday Night Live’s video: “Where can I buy the NFT of this video?”

If SNL sold the video as an NFT they would hardly be the first media company. Last week, The New York Times sold a column making light of NFTs for nearly $600,000.