The Korean electronics giant is shoring up its new flagship smartphone with an ecosystem of interconnected gadgets to try to snatch its top spot in the global market back from Chinese rival Huawei.
Samsung’s latest smartphone, the Galaxy Note 20, was one of four new devices it launched on Wednesday — along with an updated tablet, smart watch, and wireless earbuds — in a livestreamed virtual unveiling that has become the norm for tech announcements amid the coronavirus pandemic. 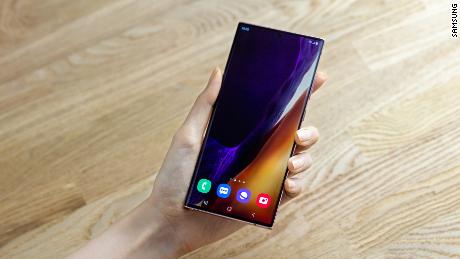 The world is relying on technology more than ever during the pandemic, said TM Roh, Samsung’s president and head of mobile communications.
“It’s how we are staying connected as we navigate the extraordinary challenges faced around the world,” he said.

As people hunker down to work and socialize from home, Roh said the company’s new lineup of devices is designed to “work together seamlessly” as part of an ecosystem of Galaxy products.
The event kicks off at 10 am ET / 7 am PT. Watch it live here and follow our updates on CNN.com.
Here’s everything Samsung is rolling out in the coming days and weeks:

Samsung’s latest smartphone comes in two versions — the 6.7-inch Galaxy Note 20, starting at $999.99, and the 6.9-inch Note 20 Ultra starting at $1,299.99.
The phones come in five colors — green, gray and bronze for the Note 20 and white, black and bronze for the Note 20 Ultra — and are available for pre-order starting August 6 before going on sale August 21.
The Note 20 is powered by the fastest processor in Samsung’s Galaxy series, the company said, and features what Samsung calls its “best screen yet.” It also works with 5G, a capability Samsung has focused on. (Apple is yet to release its first 5G smartphone.)
The smartphone comes with a new version of Samsung’s Bluetooth-enabled stylus, the S-Pen, which the company says allows a wider range of gesture controls and more accurate note-taking abilities.
The Note 20 will also come equipped with Nearby Share — Android’s version of Apple’s AirDrop — which will allow users to swap files just by pointing their phones at each other, and a feature called DeX to connect wirelessly with smart TVs.
Samsung is also making it easier to sync messages and apps with PCs running Windows 10 and offering more than 100 games through a $14.99/month XBox Game Pass Ultimate subscription starting September 15.

Samsung is also rolling out two more 5G devices — the 11-inch Galaxy Tab S7 and 12.4-inch S7+, which the company claims will be the “first tablets that support 5G available in the United States.”
The tablets, which cost $649.99 and $849.99, respectively, feature several of the productivity and gaming tools that come with the Note 20, and come with add-ons such as the S Pen, a keyboard and a wireless mouse that can be bought separately.
They will not be available until the fall, however.

The newest iteration of Samsung’s smart watch focuses on health, with new fitness tracking enhancements and a feature that automatically notifies emergency contacts when it detects you’ve fallen down.
However, the watch’s more advanced heart monitoring functions, such as echocardiogram (ECG) and blood pressure monitoring, are only available in South Korea as of now.
The Galaxy Watch3 will go on sale August 6 and has four versions, ranging in price from $399.99 to $479.99.

The final connected device in Samsung’s lineup is a new version of its wireless earbuds called the Galaxy Buds Live.

The earbuds have a bigger speaker than their predecessor, the Galaxy Buds+ released earlier this year, and three microphones that users can choose from to cancel out background noise more easily.
The Galaxy Buds Live will go on sale August 6 for $169.99.
Source: Read Full Article