The $8 billion expansion of Rio Tinto's Oyu Tolgoi mine in Mongolia has been slowed down and faces the threat of further delays, as tougher border controls imposed amid the coronavirus outbreak restrict access for personnel.

In the latest setback for the Anglo-Australian miner's plans to expand the copper and gold mine in Mongolia's Gobi Desert, Rio Tinto said construction works had been held up by local authorities' efforts to contain the fast-moving pandemic. 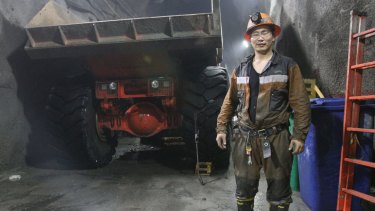 Rio Tinto’s Oyu Tolgoi mine is one of the world’s richest copper deposits. Credit:

"Work on the underground project continues, however, progress is being slowed as a result of these measures," the company said on Monday night.

Arnaud Soirat, Rio Tinto's 's copper and diamonds chief executive, said the company supported the "decisive action" taken to limit the spread of the coronavirus, but it had resulted in a restriction on the movement of goods and people in the country "and this is slowing down construction activity".

"It is too early to determine the impact of this and the team is doing all it can to minimise the disruption in a challenging environment," he said. Rio Tinto said it would update the market once more information was available.

The ASX-listed mining giant's expansion of the massive underground mine in Mongolia's south has been beset by a series of delays and cost blowouts. In June, investors were warned that the project could end up costing as much as $1.9 billion more than forecast.

Measures to contain the fast-spreading coronavirus outbreak in China, the world's biggest consumer of raw materials, have been causing logjams across the resources industry. Rio Tinto has been experiencing a slowdown in sending deliveries of copper concentrate from Oyu Tolgoi to Chinese customers across the border, prompting the miner to warn customers of delays due to restrictions imposed by Mongolian authorities.

Rio Tinto on Monday said it was continuing to operate and deliver shipments of copper concentrate to its customers.

Last week, the sparsely populated nation reported its first case of coronavirus – a French citizen who arrived on a flight from Moscow on March 2.

The mine is the country's biggest source of foreign investment and provides thousands of jobs.

US Border Patrol agent arrested and charged with trafficking over 350,000 pills believed to be fentanyl