Virgin Galactic is preparing to resume ticket sales for future space flights, in an effort to assure investors that affluent customers will pile in as the company edges toward commercial service.

Founded by British entrepreneur Richard Branson, Virgin Galactic will begin taking $US1,000 ($1515) refundable deposits on February 26, which will put those customers first in line for booking reservations. Tourist flights are expected to begin later this year, Virgin Galactic said on Tuesday, without specifying when it will resume selling seats or what price it would charge.

Accepting deposits again underscores Virgin Galactic's effort to make space tourism a reality after years of rising expectations. The company has a group of 600 people from five dozen nations, dubbed Founders, who purchased tickets as long as 16 years ago for as much as $US250,000 each. Virgin Galactic suspended ticket sales in December 2018. 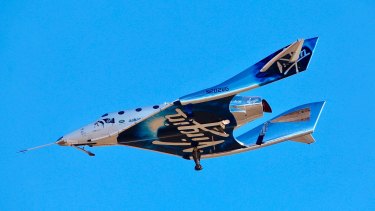 Up, up and away: Virgin Galactic plans to start space tourism flights later this year.Credit:AP

The next round of reservations are expected to cost more than the previous tranche, based on demand, company officials have said. Those sums are largely refundable until a flight date is assigned.

Virgin Galactic has collected expressions of interest from nearly 8,000 people through its web site, Virgin's commercial director, Stephen Attenborough, said in an interview this week. That's more than double the figure it reported late last year after becoming a publicly traded company.

The new initiative, called One Small Step, is designed to help the company increase its sales efforts and be "capable of delivering the numbers that we need," he said. "We will be able to identify those people who are serious about purchasing a reservation, bring them into the family and create a pool of qualified" candidates to purchase a flight, Attenborough said.

"We have a really good number who are committed and transacted and that's given us really good confidence that there is a readily addressable market for the product we are creating," he said.

Beyond market demand, the New Mexico-based company must also determine the optimal size of its customer backlog once flights begin. The service is expected to start at a measured pace and then increase over time as Virgin attains operational insights and expands its spacecraft fleet.

If there are too few people in the backlog, investors may grow nervous. Too many could lead to logjams and frustrated customers, marring the company's reputation.

Virgin laid out its tourism sales plan as it reported quarterly financial results. Shares have almost tripled this year, closing Monday at $US34.29 a share in New York. A Boeing unit invested $US20 million in the company last year for a minority stake ahead of the IPO.