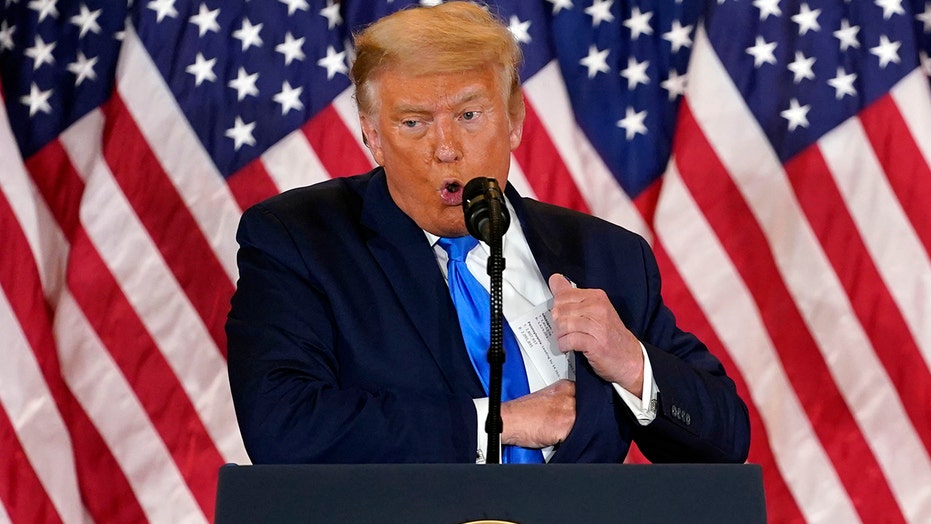 President Trump on Thursday swore that his campaign would continue to file legal challenges in states where Democratic nominee Joe Biden is projected to win or leading, as the path for Trump to reach 270 electoral votes, the number necessary to win the presidency, continues to narrow.

It is not clear that there is specific fraud occurring, particularly on the kind of scale that could influence the outcome of the presidential election.

But the Trump campaign has cited limited access to watch vote-counting in Pennsylvania and alleged instances of people who tried to vote in Nevada being told that they had previously submitted a mail ballot even though they claim they had not done so.

The Trump campaign also has similar complaints about its access to view ballots as they are counted in Michigan, though a judge ruled against the campaign Thursday afternoon. A Trump campaign lawsuit in Georgia was also dismissed.

The campaign has announced legal action in Pennsylvania, Michigan, Nevada, and elsewhere.

"All of the recent Biden claimed States will be legally challenged by us for Voter Fraud and State Election Fraud. Plenty of proof – just check out the Media," Trump said in a tweet." WE WILL WIN! America First!"

"STOP THE FRAUD!" the president said in another.

"What makes these charades especially pathetic is that while Trump is demanding recounts in places he has already lost, he's simultaneously engaged in fruitless attempts to halt the counting of votes in other states in which he's on the road to defeat," Biden spokesman Andrew Bates said. "This is not the behavior of a winning campaign. Plain and simple, Donald Trump has lost Wisconsin, he is losing Michigan, and he is losing the presidency."

There is also another legal challenge brewing from the Pennsylvania Republican Party, which the Trump campaign has asked to join, against a ruling by the Pennsylvania Supreme Court that ballots cast by Election Day but received up to three days later may be counted.

Multiple Supreme Court justices refused to take up the challenge ahead of the election, saying there was not enough time, but said that they may take it up after the election.

The Trump campaign succeeded in one legal challenge in Pennsylvania, however, in which it claimed that its observers were not being allowed close enough to watch mail ballots be counted in Philadelphia.

Trump said it was a "Big legal win in Pennsylvania!"

Still, it's not clear that there are specific instances of fraud or inconsistencies in Philadelphia, but Trump representatives argue that they are not being allowed close enough to poll workers to tell whether or not there are any. And it is also not clear that any instances of fraud that are discovered will be widespread enough to affect the outcome of any state one way or another.

However, a statement from Trump, emailed by his presidential campaign, makes clear that he believes that is the case.

Fox News' Jaqui Heinrich and the Associated Press contributed to this report.