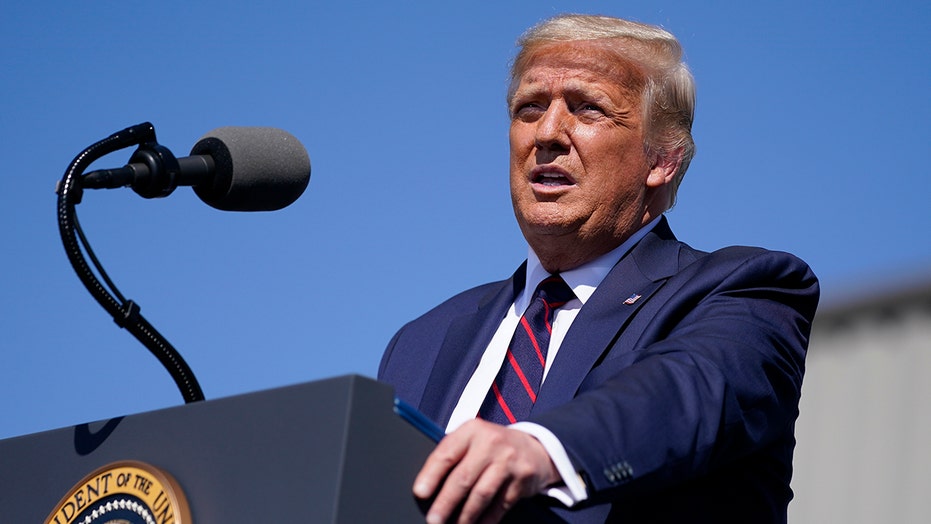 Trump delivers remarks at the 2020 Council for National Policy Meeting

In his first remarks following the 2020 Democratic National Convention (DNC), the president Friday at the 2020 Council for National Policy meeting touted his administration’s success and criticized the messaging from Democrats this week.

“Four straight days attacking America, as a racist, horrible country that must be redeemed,” Trump said of the DNC convention, saying it was the “darkest, gloomiest” convention. “Joe Biden grimly declared a season of American darkness, but look at what we’ve accomplished, until the plague came in, and look, we’re doing it again.”

Trump said his administration has helped to create “the most successful period of time in the history of the country.”

“Look at what we’ve accomplished,” he said. “They want to punish America and its citizens, instead of holding them high.”

The president went on to call the 2020 election “the biggest” election “of our lifetime.”

“No party can lead America that spend so much time tearing town America,” Trump said, adding that the “biggest part” of Biden’s speech Thursday night formally accepting the Democratic nomination for president was what “he didn’t talk about.”

Trump noted that “he didn’t talk about law enforcement” or China, warning that if Biden is elected China “will own our country.”

“We’re not going to let that happen,” Trump said, adding that intelligence reports have suggested that “China very much wants Joe Biden to win.”

The president went on to criticize Biden’s policy proposals, noting that he wants to “end fracking, end petroleum products, no natural gas, no nothing, and that's it.”

Trump went on to say that "the more success we’ve achieved, the more unhinged the radical left has become," referring to riots across the country.

"The future of our country and indeed our civilization is at stake on Nov. 3," Trump said.

The president’s remarks come after Democrats this week ripped into him and his administration, warning against four more years and fully throwing their support behind Biden and his running mate, Sen. Kamala Harris.

Biden, during his acceptance speech Thursday night, said Trump has failed his basic duties to protect Americans and blamed him for stoking anger and divisions in the country, while pledging to bring the country back into the “light.”

Biden added: "May history be able to say that the end of this chapter of American darkness began here, tonight as love and hope and light join in the battle for the soul of the nation — and this is a battle we will win and we'll do it together.”

Meanwhile, the president weighed the difference between running against Hillary Clinton in 2016 and Biden this cycle.

"What’s the difference between Clinton and Biden?" Trump asked. "Clinton is much smarter, but not a likable person. Biden, not nearly as smart, but much more likable."

He added: "I'd rather have the smarter person — who cares about personality?"

The Republican National Convention is slated to kick off on Monday, Aug. 24.

A Trump campaign official told Fox News that Trump is expected to have a "heavy in-person presence" all four nights of the convention and that "his preference is to be live," not taped.

“I think we're going to have more of it live than what they (the DNC) did," Trump told "Hannity" Thursday. "I think it's pretty boring when you do tapes. I'm going to go live and do mine live.”

The president is slated to deliver his formal acceptance speech for the Republican presidential nomination on Thursday, Aug. 27 at the White House.