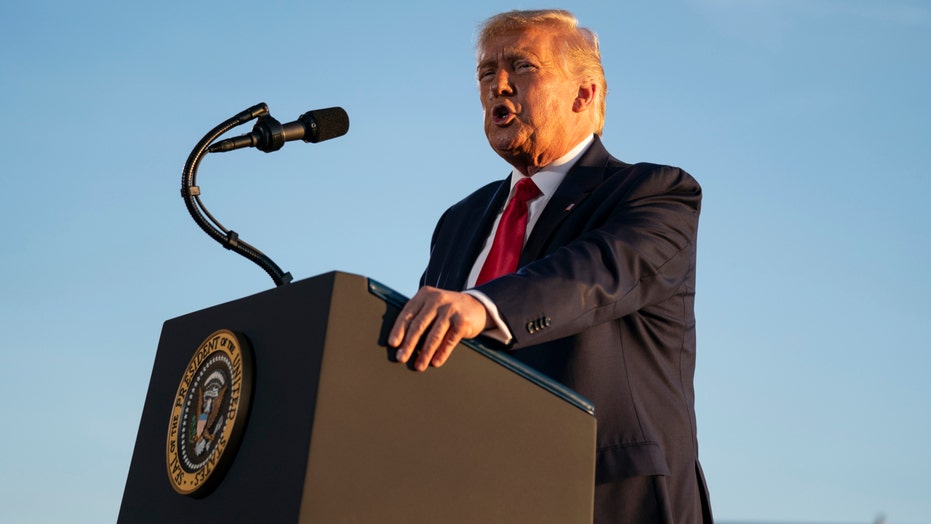 President Trump on Monday doubled down on his plan to go to Kenosha, Wis., Tuesday despite Wisconsin Gov. Tony Evers asking him to stay away.

Kenosha is where Jacob Blake, a Black man, was shot several times in the back by a police officer, leading to widespread protests that turned into riots, looting and arson last week, though the violence has subsided in recent days.

Evers, a Democrat, made the request of Trump on Sunday, saying the president "will only delay our work to overcome division" by appearing in Kenosha. Trump's campaign has highlighted rioting in several large cities in recent months as a reason to vote for him to restore "law and order."

The president also condemned Portland Mayor Ted Wheeler, with whom he has an ongoing conflict over the mayor's objections to federal involvement in stopping riots in the city despite months of unrest and a fatal shooting over the weekend.

"Portland is a mess, and it has been for many years. If this joke of a mayor doesn’t clean it up, we will go in and do it for them!" Trump said.

Wheeler last week sent a letter to Trump slamming the president for engaging in "a cynical attempt to stoke fear and distract us from the real work of our city" by offering to send federal law enforcement to the city.

"On behalf of the City of Portland: No thanks," Wheeler said. "We don't need your politics of division and demagoguery. Portlanders are onto you."

Wheeler added: "There is no place for looting, arson, or vandalism in our city. There is no room here for racist violence or those who wish to bring their ideology of hate into our community. Those who commit criminal acts will be apprehended and prosecuted under the law."

Yet Portland has been unable to keep peace in its streets for months, and Multnomah County District Attorney Mike Schmidt announced earlier this month that his office will "presumptively decline" to prosecute many crimes associated with the riots, including interfering with a peace officer, second-degree disorderly conduct, first- and second-degree criminal trespass, "escape in the third degree," harassment and "riot."

The unrest has played out while Trump is the president — which Democrats have been quick to point out — but it has been in largely Democrat-run cities where mayors and governors have sometimes stymied efforts to send in federal law enforcement to get a handle on the riots. Democratic presidential nominee Joe Biden had previously only occasionally condemned the violence, making several statements asking for peace but not emphasizing it as much as Trump has. But in the past week, Biden has been more forceful in his condemnation.

He said in a statement over the weekend: "The deadly violence we saw overnight in Portland is unacceptable. Shooting in the streets of a great American city is unacceptable. I condemn this violence unequivocally. I condemn violence of every kind by anyone, whether on the left or the right. And I challenge Donald Trump to do the same. It does not matter if you find the political views of your opponents abhorrent, any loss of life is a tragedy."

In addition to the weekend shooting of an apparent Trump supporter, there was a fatal shooting last week in Kenosha, allegedly by a pro-police 17-year-old, of anti-police brutality protesters. The alleged shooter's lawyer says he acted in self-defense.

That, as well as the shooting of Jacob Blake on Aug. 23, allegedly by Kenosha police officer Rusten Sheskey, which triggered the Kenosha unrest, will serve as the grim backdrop to Trump's controversial visit to the small Wisconsin city.

Earlier Sunday, Wisconsin Lt. Gov. Mandela Barnes also expressed concerns about Trump’s visit. “I don’t know how, given any of the previous statements that the president made, that he intends to come here to be helpful. And we absolutely don’t need that right now,” Barnes said in an interview with CNN.

But White House spokesman Judd Deere said the president's visit will be aimed at healing.

"The White House has been humbled by the outreach of individuals from Kenosha who have welcomed the President’s visit and are longing for leadership to support local law enforcement and businesses that have been vandalized," Deere wrote in reply to Evers' letter asking Trump to stay away. "President Trump looks forward to visiting on Tuesday and helping this great city heal and rebuild."

Fox News' Frank Miles and The Associated Press contributed to this report.