LAS VEGAS ― President Donald Trump’s choice to stay at his own Las Vegas hotel each night during the western states swing that wraps up Friday likely cost taxpayers a million extra dollars as well as diverted thousands of them into his own cash registers.

Previous presidents on extended trips away from the White House typically stayed in the city of each day’s final event, or traveled to the city of the following day’s first event. Trump, instead, traveled back to Las Vegas each night from California, Arizona and Colorado to overnight at his Trump International Hotel ― requiring several extra hours’ flying time on Air Force One, a plane that costs taxpayers about a quarter-million dollars per hour in the air.

“At this point in his presidency, there’s no way to look at it other than Donald Trump is using his position and taxpayer dollars to make money for his businesses,” said Jordan Libowitz with Citizens for Responsibility and Ethics in Washington. “This is beyond a conflict of interest. This is corruption, plain and simple.”

When Trump was asked about his decision to return to Las Vegas each night just before he left for California, he claimed he had nothing to do with it.

“Largely, the schedule is set by the Secret Service. We do what they want us to,” he told reporters at Joint Base Andrews just before the plane’s departure. “I don’t set the schedule. I have nothing to do with it.”

It’s unclear, however, what Trump meant. Previous presidents visited the same western states numerous times, for example, and never once stayed in a Trump property.

A Secret Service spokesperson told HuffPost: “The U.S. Secret Service works in conjunction with the administration on all presidential and First Family visits as our primary concern is the safety and security of those that we protect.”

Trump’s White House did not try to defend the accuracy of Trump’s claim, and instead argued that the decision to use Trump International Hotel Las Vegas as a base actually saved taxpayers’ money. 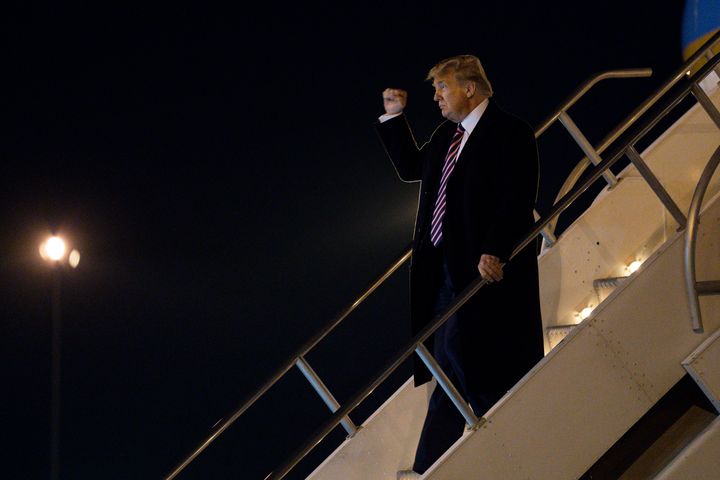 That analysis, though, ignores the single biggest driver of presidential costs: the use of Air Force One.

According to a report by the Government Accountability Office last year, the Air Force unit that operates the modified Boeing 747 normally used as the presidential aircraft spent $4.4 million for four round trips from Andrews to Palm Beach in early 2017 ― which works out to $273,063 for each hour of flight time.

Had Trump held the same events but done so in a geographically logical order ― starting in Beverly Hills and finishing in Colorado Springs, but overnighting each day in the city where he would begin the following morning ― Trump would have spent four fewer hours aboard Air Force One, thereby saving taxpayers about $1.1 million.

The anonymous White House official’s claim that more motorcades would have been required also does not tell the whole story. A full motorcade ― including the presidential limousine, staff vans and various specialized trucks ― is needed in any city where Trump is traveling, regardless of whether it will be used to move him from an airport to an event site and back, or to an overnight hotel and then to the event site the next day.

What’s more, advance teams scout out a city and motorcade routes are closed to traffic on any presidential visit, regardless of whether it is for a brief visit or an overnight stay.

Indeed, the repeated overnight trips to Las Vegas may have forced the Secret Service and other support personnel to keep a motorcade there for a full four days, rather than move it to the site of an upcoming presidential trip.

This week is not the first time Trump used presidential trips to spend time at his own properties, even though it added considerable travel and security costs for taxpayers. In 2018, for example, he spent two days between official meetings in London and a Helsinki summit with Russian dictator Vladimir Putin at his own resort in Scotland, rather than waiting in London. And last summer, he insisted on staying at his resort on the west coast of Ireland on the days surrounding his visit to Normandy, France, even though it required several additional hours on Air Force One.

Precisely how many taxpayer dollars wind up in Trump’s pocket from these stays cannot be determined. The White House, despite numerous queries from HuffPost over a period of months, refuses to disclose how many executive branch employees stay with Trump when he visits his own properties and how much it is costing taxpayers. And how much of that revenue winds up as profit flowing to Trump also is not known because Trump reneged on a campaign promise ― and decades of precedent ― by refusing to disclose his tax returns.

According to The Washington Post, Trump’s business charged Secret Service agents as much as $650 a night for rooms at Mar-a-Lago, Trump’s resort in Palm Beach, Florida, and $17,000 a month for a cottage at Trump’s golf resort in Bedminster, New Jersey.

Based on these and other invoices obtained by various groups using lawsuits under the Freedom of Information Act, Trump has likely funneled at least several million dollars of taxpayer dollars into his own cash registers in his first three years in office.