Winemaking giant Treasury Wine Estates will look to sell off $300 million of non-priority brands and various other assets in an attempt to offset the impact of shock tariffs on its lucrative Chinese import market.

Treasury told investors on Wednesday it would look to generate “at least” $300 million through a series of various divestments – which will not include its high-end Penfolds brand – as the business revealed a 43 per cent drop in statutory net profit to $120.9 million for the first half of the financial year. 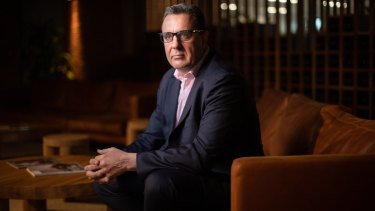 Analysts had been expecting the winemaker’s profits to fall by around 30 to 40 per cent for the half, due to the company’s lost business in China following an announcement last year by the country that it would impose a tariff of 169 per cent on imported Australian wines.

Treasury’s sizeable drop in profits was further hurt by a $45.6 million impairment related to the divestment of a number of US brands and assets. Net sales revenue fell 8 per cent to $1.4 billion.

Profits from sales into Asia dropped 28 per cent due to the action from the Chinese government and broader pandemic restrictions, though Treasury noted “progressive recovery” was beginning.

Analysts and investors have been keen to hear Treasury’s plans to regain the 30 per cent of earnings the company is set to lose due to the Chinese tariffs, with market-watchers concerned it could take a long time to reallocate the sales, which could come at lower margins.

The company noted it was accelerating its marketing into other Asian markets such as Thailand and Hong Kong and was also reducing its cost base in China. Chief executive Tim Ford said the business expects demand for its wine in China to remain “extremely limited” for the foreseeable future.

“While we expect disruptions to continue across a number of our sales channels through the remainder of fiscal 2021, we are well placed to further our recovery once conditions improve in key channels for luxury wine,” he said.

“The fundamentals of our diversified global business remain strong and I am confident they will continue to support our execution into the future.”

The company confirmed plans it would split its business into three new internal divisions of Penfolds, Treasury Premium Brands and Treasury Americas, highlighting the company’s plans to boost sales in the growing US market.

On Wednesday it unveiled a new, high-end range of wines grown in California over the past 20 years, a move it hopes will boost recognition of the Penfolds brand in the country. The top wine of the four in the new range is priced at $950, the same as Penfolds’ famed Grange.

Chief winemaker Peter Gago told The Age and The Sydney Morning Herald while the wines would be distributed around the world, the burgeoning wine-drinking population of America was “target number one”.

“We already do reasonably well in California and New York and other parts of America, but if this range is successful over there it will really increase the awareness of Penfolds in America,” he said. “And if that happens, it won’t just be for these new lines. Everyone wins if this is done properly.”