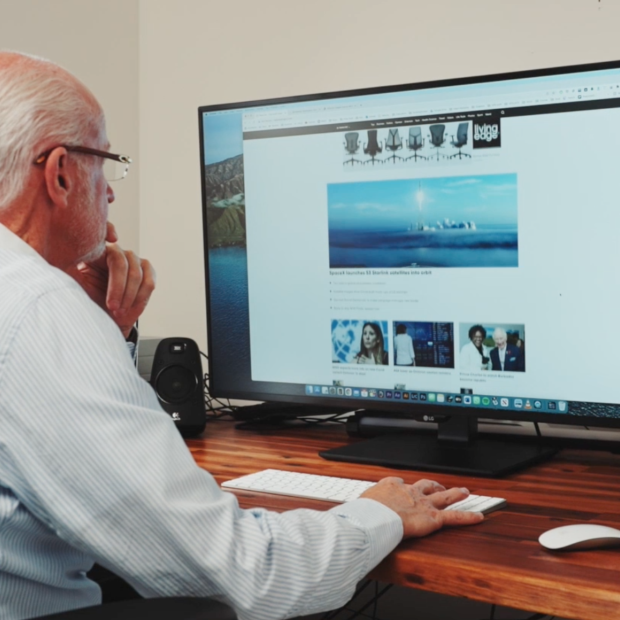 Michael Norris, described by staff as the “chairman”, has tried to launch News.net before.Credit:Screenshot

In early April, about 25 journalists and sales executives gathered in a shared office space on Bond Street in Sydney to watch Flight Centre founder Graham ‘Skroo’ Turner deliver a speech about entrepreneurship.

As Turner sat on the Zoom call with an Australian flag beside him, he enthused about the early days of his company. The reporters and editors on the other end, who had flown in from across the country for a week-long ‘boot camp’, were optimistic.

They had just signed contracts to join a start-up called News.net. Arguably the most ambitious new Australian journalism venture in decades, it had plans to employ 170 people within 23 weeks and launch more than 1500 local, national and international websites that could be linked to the one domain name.

Crammed into the office alongside the bureaus of German publication DPA and Denmark’s Ritzau, the assembled team were told News.net would change the way people accessed news across the world while being a solution to the large gaps in news coverage left behind by jobs cuts in regional media over the past couple of years. The aspirations were sky high – News.net was going to redefine journalism.

The group were told Turner was a friend of Michael Norris, who was not a director according to ASIC filings but told people he was the “chairman”. Turner warned it would be tough: that the odds would be stacked against them. But he said the launch would feel like the moon landing. With a year’s worth of funding being promised by “wealthy investors”, they felt confident it would be a success.

They were very wrong.

Six months later, the publication, which was being guided by former AAP editor-in-chief Tony Gillies, failed to launch. Current and former members of staff, including Gillies (who until recently was listed as CEO on the website), are owed thousands of dollars.

Suppliers including government-funded newswire AAP and UK newswire Press Association are on the verge of terminating agreements because of repeated invoice delays. The chief financial officer and sole director of the company, Brendt Munro, has told staff the company’s payment delays are caused by “anti-money laundering” laws and problems with international bank transfers (the first delay was blamed on his personal circumstances, according to people familiar with the reasons).

To make matters worse, the employees’ case against the company has been referred to the Fair Work Commission and the Media Entertainment and Arts Alliance is preparing to take the case to the Federal Circuit Court. Norris and Munro could not be reached for comment before deadline. Turner was also contacted for comment.

For the employees and suppliers of News.net, who spoke anonymously for fear of retribution and because they signed non-disclosure agreements, the outcome is worse than they could have imagined.

“Australia, it’s time to get your voice back,” Gillies declared in an early promotional video for News.net obtained by this masthead where he spoke about reimagining media businesses.

It was a claim that had convinced many – including his former journalists at AAP – to join. The previous two years were difficult for Australia’s media companies – local and regional news had worn the worst of it. More than 1000 jobs were axed at News Corp as it reduced the number of local and regional titles it operated, while Australian Community Media, the owner of The Canberra Times, had shut some of its non-dailies. News bulletins by television networks had also been reduced in parts of the country.

In the wake of mass job cuts and the near closure of AAP, Gillies was looking to do something different. He was public about his desire to improve local news coverage and had separately announced plans for a product called NewsFarm, which appeared to emulate Norris’ vision (NewsFarm never launched because it didn’t get the necessary funding).

“A lot of my work had been focused on resurrecting news media in regional Australia and was gaining modest attention,” Gillies said in a written statement to this masthead. “Michael made contact with me having seen the work I was involved in. He shared the concept of News.Net and shared an ambitious and impressive business plan that aligned with my goals. 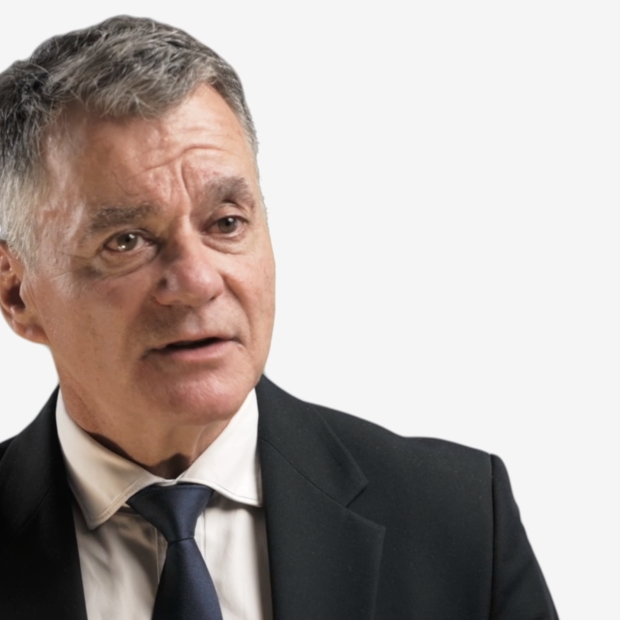 “I was brought on to use my editorial skills, experience, reputation and contacts to bring this version of the idea to life. I developed a publishing mission for the venture and secured a strong editorial team to execute it.”

Gillies began working for Norris as a consultant, overseeing editorial, audience and brand development as well as research and analysis. He also prepared a promotional video for advertisers.

Norris had tried to get similar operations running before. The Queensland media executive, who once produced ads and was one-time boss of Media Corporation Australia (later renamed Midwest Radio), attempted to build the publication between 2012 and 2014. Searches on Google and LinkedIn suggest he may have also tried to build the company as early as 2006.

What was different this time was the level of ambition – documents seen by this masthead showed plans to expand to more than 160 journalists across Australia. The company had brought in someone well-known – Gillies, who had helmed the AAP editorial team for more than a decade before it was salvaged by a group of philanthropists in 2020. It was Gillies’ passion and dogged determination to change the news model that convinced some former AAP staff they should come on board. 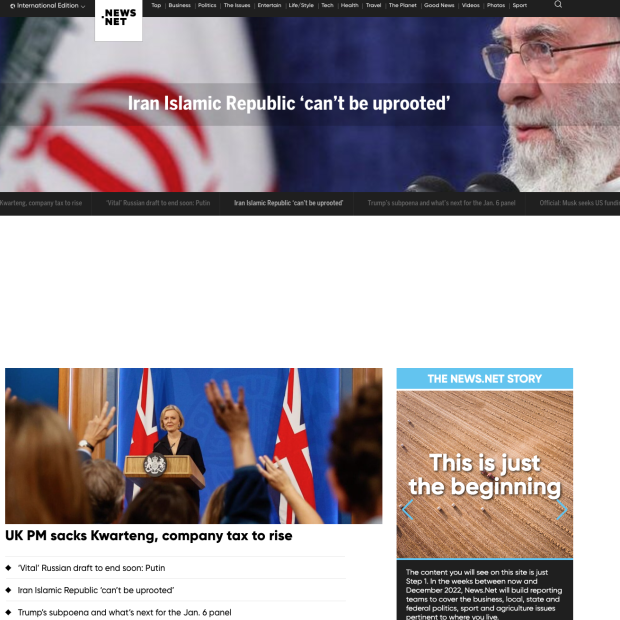 Norris was also well known early in his career. In 1995, his firm Unitel paid $2.3 million for Brisbane radio station 4BH before selling it two years later for $11.7 million to APN News & Media. He also owned Ipswich’s Mix 106.9 FM, served as a partner in the Star Broadcasting network and served on several company boards. He was also active in local government, where he formerly chaired Brisbane Marketing and the city council’s economic development committee.

Norris’ media empire fell apart in the mid-2000s when receivers and liquidators were appointed to 10 companies linked to him. He said at the time in the Courier Mail the public record did not reflect the “true story” of what had happened and has remained out of the public eye since then. This masthead does not suggest what occurred in 2006 is related to what is currently happening at News.net.

Even in the early days of the start-up, there were problems. The staff who spoke to this masthead said they became sceptical of the publication as early as April, when it was clear the technology capacity of the website they would run was nowhere near ready for launch. This was made worse by the fact that the only person creating this website – which was supposed to be linked to a further 1850 local news sites – was run by one part-time IT worker in Queensland.

Pictures would take minutes to crop while basic parts of the website didn’t work, according to one person familiar with the issues. At one point the website started attracting soft pornography ads. The April 26 launch was pushed back to May. It was then pushed back to June.

Then the payments stopped coming in on time. Multiple current and former employees, who spoke anonymously for fear of retribution, said the first missed pay day was in late June. Two people familiar with the conversation Gillies had on behalf of the company said it was an issue with international bank transfers. The money ended up coming in a week later, with an extra $150 debit gift card as an apology.

In a meeting on June 30, Norris explained the delays were linked to the website problems, which had caused angst among investors. He apologised and promised he would never let it happen again, according to people who attended the meeting.

It happened again. On this occasion staff were told if they stayed involved, they would be part of a $1 million pot of money to be allocated every three months. Multiple staff say the delays have now happened up to five times.

An email from financial director Brendt Munro from September 17, obtained by this masthead, said payment to staff was “at the hands of the banking system”.

“Just to explain our position, four weeks ago we had funds through the 3rd party that were to be received from an NZ investor. These funds have still not been received. According to our bank, it is because of new AML (Anti Money Laundering) procedures. I can understand the bank’s position and we don’t want to receive tainted funds.”

“I understand this issue hurts you deeply. It hurts. It is painful.”

Another email on September 21 from Munro said the company had secured additional funds. “These delays have hurt our staff and families,” he said. “It has also affected the confidence and trust you should have in this business. We do understand this.”

But the money still hasn’t come. Now it is being blamed on shareholder issues.

Some staff are owed up to seven weeks’ pay plus superannuation, while suppliers of content such as AAP have threatened to terminate their agreements because of missed subscription payments. The content supply agreement for PA, for example, outlined a 10-year term with a minimum charge of $35,000 for the first year and an increase to $75,000 by year 10. Deadlines to pay staff have been introduced and not met. Gillies, who is effectively still working as a consultant for News.net, said he has no oversight or visibility on the financials, but conceded he, his staff and suppliers were owed money.

“Yes, I am aware and have been assured they will be paid,” he said in response to three questions regarding payments. “I am not a director of the company and do not have visibility over the finances as the company is still in its pre-launch phase.

“All of my recommendations and actions regarding staff recruitment and content and service procurement have been subject to prior agreement and approval by the founder/principal, and the CFO. These decisions were made with their reassurance the company had the financial wherewithal to support them."

“I am not a director of the company and do not have visibility over the finances as the company is still in its pre-launch phase.”

Australia’s media union is now involved. Meetings held with some current and former staff this week have indicated plans to lodged recovery proceedings in the Federal Circuit Court, and the union is separately waiting for a listing with the Fair Work Commission.

Staff are waiting on a big cash injection sometime this month. They’ve been told any legal action should be delayed until then. Some are unconvinced. As one employee put it: “Everyone has been duped.”

The Morning Edition newsletter is our guide to the day’s most important and interesting stories, analysis and insights. Sign up here