Every part of diversified development giant Mirvac’s business has felt the "exceptionally challenging" market conditions of the COVID-19 crisis, with one surprising exception – residential.

Mirvac reported a significant slump in statutory profit to $558 million in the year to June 30, down 45 per cent from the previous year’s $1.01 billion, a result driven by the economic downturn caused by the pandemic and valuation changes to its property portfolio. Funds from operations, the industry’s preferred earnings measure because it excludes fluctuations in property valuations, fell 3.5 per cent to $602 million.

"There is no playbook for the times we’re operating in," Mirvac’s chief executive and managing director Susan Lloyd-Hurwitz told investors on Thursday, emphasising the disruption caused by the pandemic. 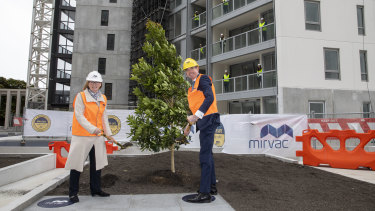 Mirvac’s Susan Lloyd-Hurwitz at the “topping out” of one of the developer’s buildings.Credit:Quentin Jones

"The outbreak of the COVID-19 pandemic caused a significant financial impact across the business from the third quarter," Ms Lloyd-Hurwitz said. "We were plunged into what can only be described as an exceptionally challenging year."

Earnings across the developer’s office, industrial and retail assets were hit as the group made $86 million in provisions for project write-offs, booked falling revenues at its Travelodge Hotels and granted rent reductions to tenants whose small and medium businesses were significantly hurt in the pandemic.

On the upside, Mirvac settled sales with buyers on a record number of apartments and land lots through the year.

The developer's large apartment tower projects are concentrated in Sydney and Melbourne. It also subdivides multiple housing estates on both city's edges. The group settled 2563 lots against its pre-COVID target of 2500, giving it a healthy earnings margin of 21 per cent across the segment. Meanwhile, defaults from buyers ticked up slightly to 2.2 per cent.

While apartment sales are now falling off, the government’s building stimulus package has accelerated interest in land lots, where pre-sales have jumped 20 per cent above 2019 levels, the company said.

Mirvac’s head of retail Susan MacDonald said just 58 per cent of retail rents had been collected between April and June as shoppers defaulted to smaller, more local centres.

Its large office portfolio maintained a high occupancy rate of 98.3 per cent, but the fourth quarter saw a freeze in leasing activity and incentives are starting to increase quite significantly, Mirvac said. Occupancy across the industrial sector for assets such as warehouses was 99.4 per cent.

The result was "in line with our expectations," Jefferies analyst Sholto Maconochie said. However, the group's earnings per security of 15.3¢ were about 3 per cent below market expectations.

Mirvac will pay out full-year distributions of $357 million, or 9.1c per security, a 19 per cent reduction on the previous period. It did not give guidance for next financial year, but said it will target a distribution payout ratio of 65 per cent to 75 per cent of operating earnings.