The impeachment trial of President Donald Trump seemed like it would have massive implications when it took place ― somehow only ― earlier this year. But among Trump’s most fervent supporters, it has served as a rallying cry.

At the Republican National Convention this week, for example, speakers repeatedly brought up that their presidential candidate was nearly thrown out of office over corruption.

Rather than shirking away from the fact that Trump was one of only three U.S. presidents to be impeached, Republicans flaunted it to proclaim the president is perpetually and unfairly under attack.

“When you take on the swamp, the swamp fights back,” Rep. Jim Jordan (R-Ohio), who has served in Congress since 2007, said Monday in a speech. “They tried the Russia hoax, the Mueller investigation, and the fake impeachment. But despite this unbelievable opposition, look what this president has accomplished.”

House Democrats voted in December to impeach Trump because he threatened to withhold military aid from Ukraine if the country did not open an investigation into Hunter Biden, the son of now-Democratic presidential nominee Joe Biden. Trump was impeached on charges of abuse and obstruction of justice, among others. The Senate, which is led by Republicans, largely dismissed the concerns over the president using his office for political gains and voted against removing him from office.

So Trump remains, with a black mark on his record but also the knowledge that members of his party will stand by him regardless of charges against him. 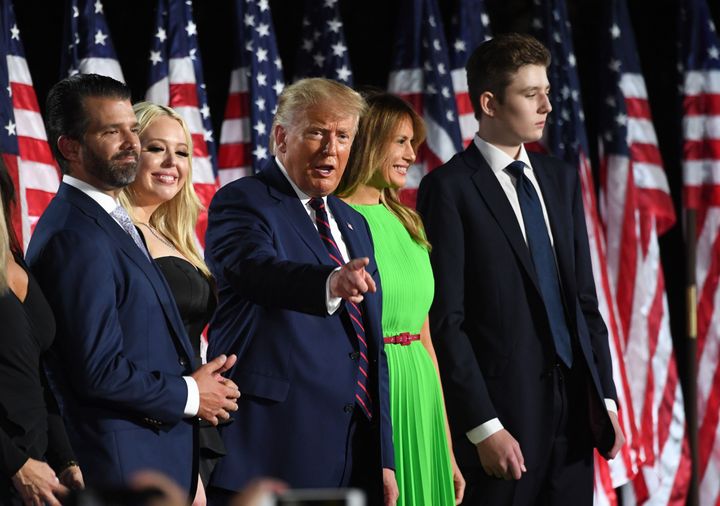 At the RNC, some speakers even brought up Hunter Biden. Former Florida Attorney General Pam Bondi didn’t say the word impeachment, but over the course of her six-minute speech on Tuesday night, she used Hunter Biden’s work in Ukraine to push the narrative that Joe Biden is corrupt and uses nepotism to help his children get ahead. (That was said without a hint of irony during a convention that featured six of Trump’s family members as speakers.)

Reps. Elise Stefanik (R-N.Y.) and Jeff Van Drew (R-N.J.) also talked about Trump’s impeachment, using it to call Democrats liars and reiterate the tired talking point that Republican voters’ rights are at risk. Van Drew is a former Democrat who switched parties in December and pledged his “undying support” for Trump.

“Since his first day in office, President Trump has fought tirelessly to deliver results for all Americans, despite the Democrats’ baseless and illegal impeachment sham and the media’s endless obsession with it,” Stefanik said. “I was proud to lead the effort standing up for the Constitution, President Trump and most importantly the American people. This attack was not just on the President, it was an attack on you ― your voice and your vote.”

It makes sense that Republicans mentioned Trump’s impeachment. Polling showed that the issue really fired up Trump’s base: Trump hit his highest approval rating (49%) since taking office during the impeachment trial, according to a February Gallup poll.

If Democrats see impeachment as a major political winner, that wasn’t clear during the Democratic National Convention that took place last week. They took aim at Trump over a host of other issues, but they didn’t mention Trump’s impeachment.

The RNC offered proof that being impeached didn’t cause Trump to take anti-corruption laws more seriously.

The president delivered his speech on the White House lawn, using his own office to boost himself politically. Both Secretary of State Mike Pompeo and acting Secretary of Homeland Security Chad Wolf took part in the convention, in an apparent violation of the Hatch Act ― a law that restricts federal employees from engaging in partisan political activities. Pompeo’s potentially illegal RNC speech was recorded while he was in Jerusalem on a foreign tour connected to his official government duties. Wolf was featured in a naturalization ceremony that was broadcast during the convention.

Government ethics experts have also raised concerns that possibly “hundreds” of other federal employees were involved in producing some aspect of the convention.

White House chief of staff Mark Meadows brushed off the issue, telling Politico earlier this week that “nobody outside of the Beltway [in D.C.] really cares” that the RNC broke the law. The American people “expect that Donald Trump is going to promote Republican values and they would expect that Barack Obama,” he added. “This is a lot of hoopla that’s being made about things, mainly because the convention has been so unbelievably successful.”

CORRECTION: Donald Trump is one of only three, not four, U.S. presidents to be impeached.