If you’re a woman in America—or you identify as anything other than a cisgender male—you might be inclined to believe you’re entitled to equal rights as men, if not equal privileges. After all, the 14th Amendment of the U.S. Constitution promises all citizens “equal protection of the laws.” But as 1970s-era activists like Gloria Steinem and Bella Abzug would tell you, that’s not synonymous with equal rights.

Confusing, right? You’d be in good company if you thought an amendment guaranteeing equal rights regardless of sex passed decades ago; as many as 80 percent of Americans believe this to be the case. But the Equal Rights Amendment, first proposed in 1923 by suffragists Alice Paul and Crystal Eastman, was never ratified. You can in part thank Phyllis Schlafly, the main protagonist of FX’s brilliant new series, Mrs. America, for that. 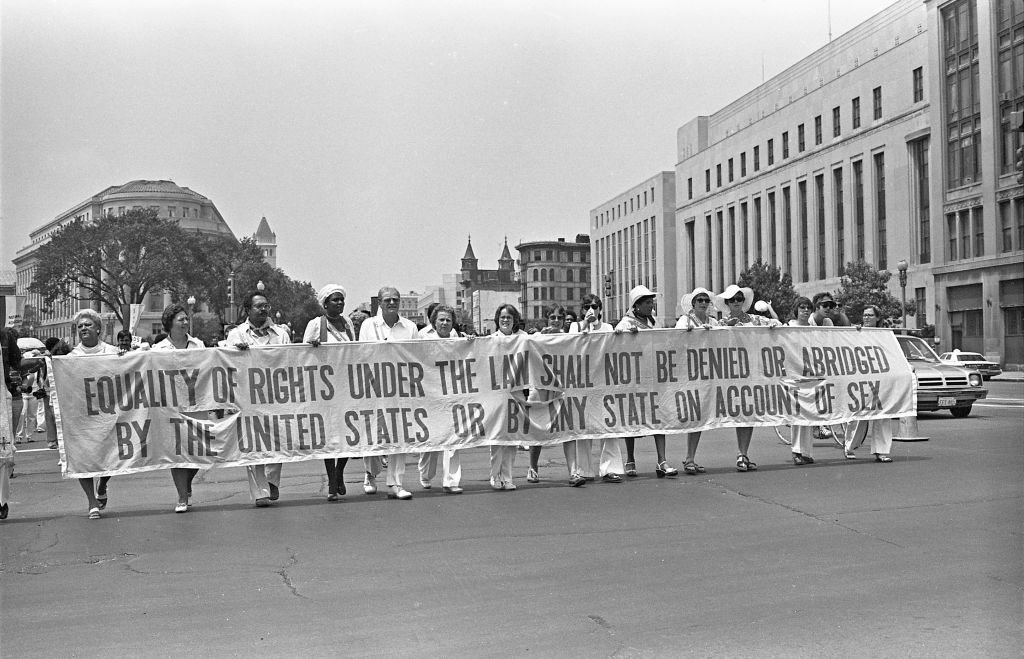 In Mrs. America, we get a backstage pass to the drama that unfolded in the 1970s, when Schlafly, a self-proclaimed Illinois housewife with expertise in national defense, pivoted her political mission to defeat the ERA. She believed “equality” was a step down for women, that it would strip them of their privileges (such as alimony, child support, and protection from drafting for combat duty), that gay men and women would be given “the same dignity as husbands and wives,” and that a woman’s most important roles were wife and mother. Any suggestion otherwise was an insult to housewives and stay-at-home mothers everywhere, according to her.

But with the backing of such prominent activists as Steinem, Abzug, Betty Friedan, Shirley Chisholm, Jill Ruckelshaus, Florynce Kennedy, and others, the amendment was passed by the House in 1971 and the Senate in 1972. Per Article Five of the Constitution, all the proposal needed was ratification from 38 of the 50 states. In 1977, the ERA had won 35—three short of its goal. Schlafly and her grassroots movement ensured those three additional ratifications never happened. In fact, their efforts pushed several states to retract their ratifications. Congress’s deadline for ratification came and went, and the ERA officially fell flat on its face on June 30, 1982.

For decades, any further action was stunted. But the once-heralded amendment has since reawakened, and it’s time to pay attention.

Yes, though the specifics of how are complicated.

The amendment hung in limbo for decades. But in 2017, Nevada Senator Pat Spearman, a Democrat, coaxed the state legislature to ratify the ERA many years after the 1982 deadline. In 2018, Illinois did the same, and, crucially, in January 2020, Virginia finally became the 38th state to ratify the proposal.

In February, the House made the momentous decision to do away with the 1982 deadline, seemingly clearing the way for the ERA to become law.

Problem is, not all experts agree that erasing the deadline is constitutional, nor that the states that revoked their ratifications in the ’70s can be legitimately counted.

The official stance of the Alice Paul Institute, advocates for the ERA, is that “Article V grants no power of rescission to the states, and based on both precedent and statutory language, a state withdrawal of its ratification of a constitutional amendment has never been accepted as valid.” 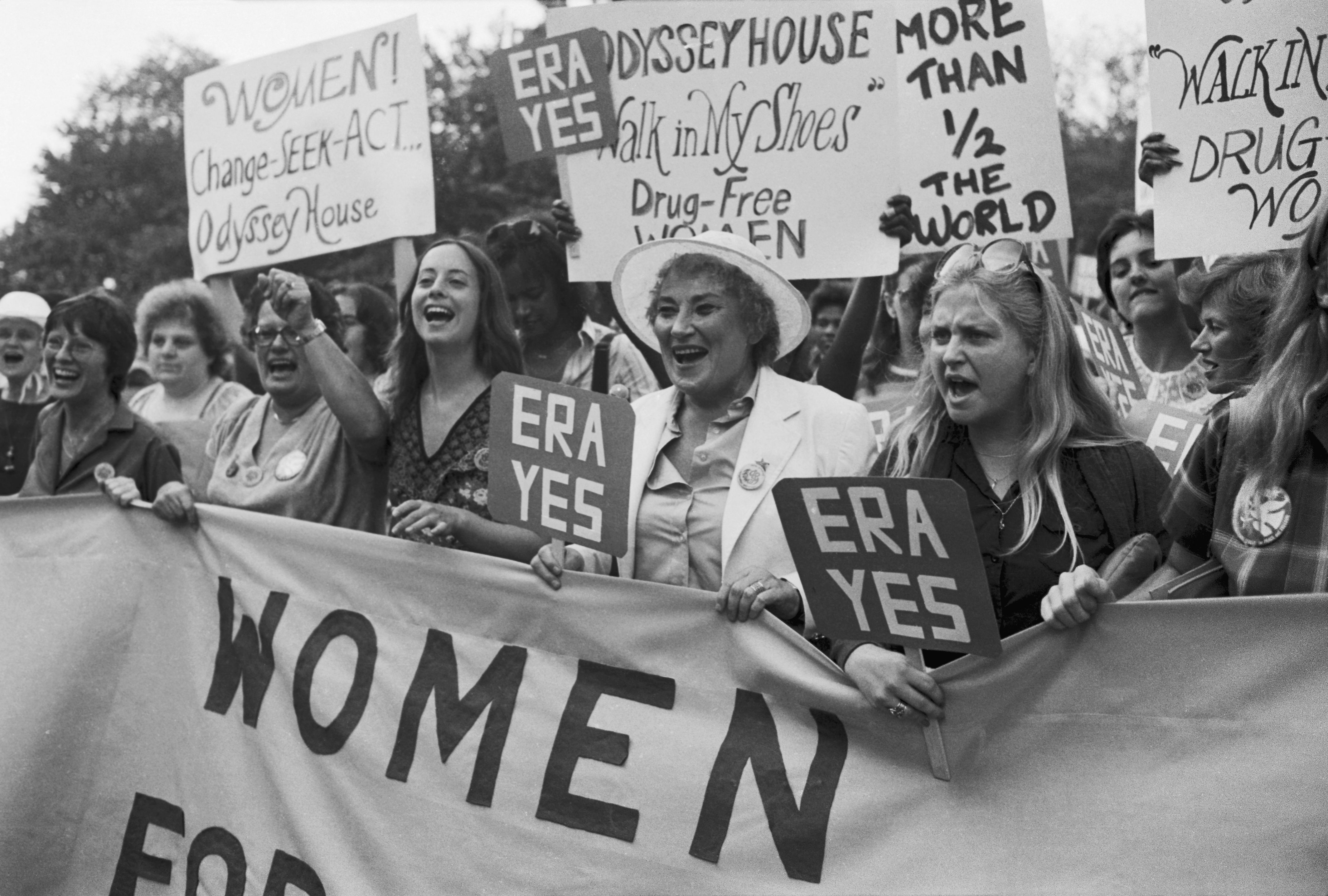 On the other hand, in 1977, during the ERA’s original ratification process, Grover Rees III, a lawyer who later served as an ambassador under the Bush administration, argued in the Louisiana Law Review, “Although the Constitution does not explicitly provide for rescission of resolutions ratifying amendments, it is reasonable to suggest that the controversy is artificial, in light of the general rule that a legislative body may rescind any of its own actions, at least until they have taken effect.”

All that is to say: No one’s quite sure yet.

Reported NPR, “Senate Majority Leader Mitch McConnell, R-Ky., said earlier this month that he’s ‘personally not a supporter’ of the amendment, and the Trump administration’s Office of Legal Counsel has said that it considers the ERA ‘expired.’”

There’s also an important stipulation to that expiration: As The Atlantic reported in 2019, ratification time limits “didn’t come into use until the 20th century. In 1921, the Supreme Court held that Congress could put such limits into a proposed amendment—but not that it is required to do so. … The drafters of the ERA, by design or luck, did not put the seven-year time limit into the text of the proposed amendment itself—instead, as in three other 20th-century amendments, it is in the resolution language proposing the text.”

This all leads to ERA advocates questioning why Congress can’t retroactively extend the deadline. The House has already agreed it can. The question has now been passed along to the Senate, where it currently awaits a decision. As of the writing of this article, the bill had received 48 cosponsors.

What did the Equal Rights Amendment promise, and has that changed today?

In its simplest form, the Equal Rights Amendment promises that “equality of rights under the law shall not be denied or abridged by the United States or by any state on account of sex.” You can read the rest of the amendment here.

In the 1970s, feminist activists—and, in fact, many bipartisan leaders—saw the bill as noncontroversial, and giving a victory to the women’s rights movement seemed a smart political play. But conservative leaders such as Schlafly worried the amendment was too vague, and that it would actually put women at a disadvantage by requiring them to register for the draft, support themselves financially, etc. She also believed it would break traditional family units, lead to rising abortion rates, and enhance gay rights, which, in her book, was a bad thing. 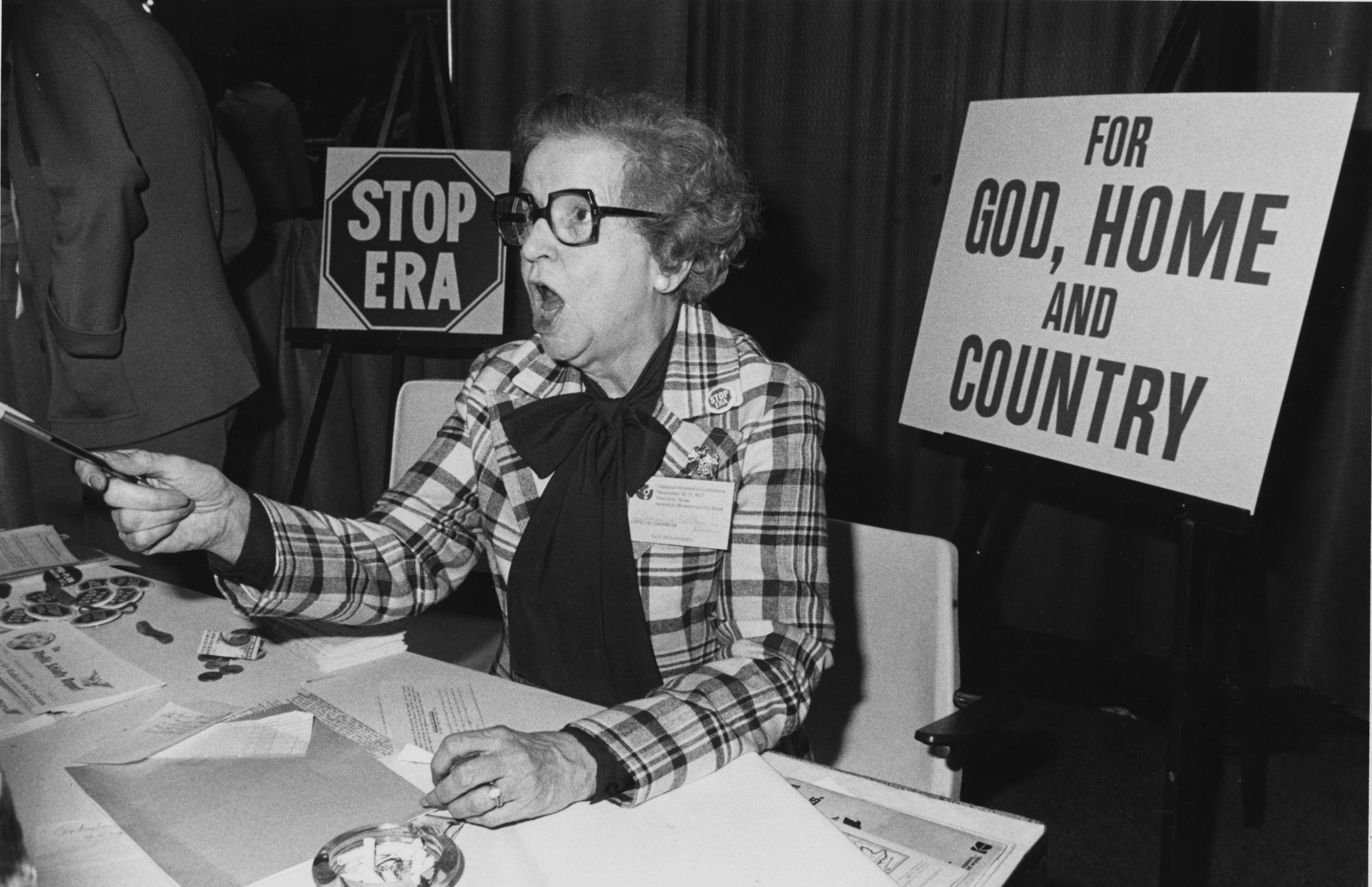 According to the Alice Paul Institute, the ERA today would, for the first time ever, make sex a suspect classification, the same as race, religion, and national origin. Any government action that treated people different on the basis of sex “would be subject to strict judicial scrutiny and would have to meet the highest level of justification—a necessary relation to a compelling state interest—to be upheld as constitutional.”

But the language is broad enough that it could bring a bevy of other changes with it as well. These changes are hypothetical, so it’s unclear exactly what would or would not be included. But according to The New York Times, proponents of the bill believe it could lead to:

Finally, some ERA proponents believe it could further the fight for abortion rights.

“There certainly would be the opportunity to argue about abortion under the Equal Rights Amendment, but it’s not clear how that would come out,” Martha Davis, professor of law at Northwestern University, told NPR.

Those who still oppose the amendment adhere to arguments that the amendment would “intrude on” religious practices, break family units, and do away with single-sex areas such as dormitories and bathrooms.

It depends on who you ask.

Those who oppose (and opposed, like Schlafly) the amendment believe it to be redundant. Because the Equal Protection Clause of the 14th Amendment was extended to cover multiple forms of discrimination on the basis of sex, they see no reason why the ERA is needed. But according to the Times, there are still obvious gaps in existing laws, especially when it comes to domestic violence, harassment, pay equity, and LGBTQ issues. 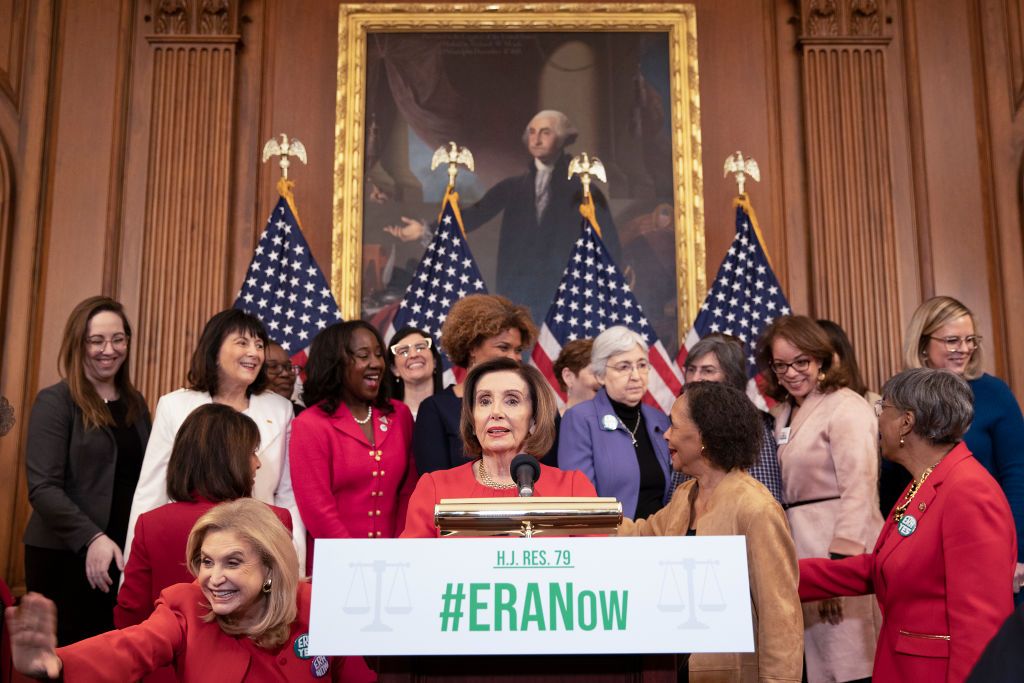 The Alice Paul Institute also considers the amendment an important protection against the unpredictability of future administrations. “Without the ERA in the Constitution, the statutes and case law that have produced major advances in women’s rights since the middle of the last century are vulnerable to being ignored, weakened, or even reversed,” the advocates wrote. “Congress can amend or repeal anti-discrimination laws by a simple majority, the Executive Branch can negligently enforce such laws, and courts, including the Supreme Court, can interpret the intermediate standard of review to permit certain forms of sex discrimination.”

Others consider it a symbolic battle. Said Supreme Court Justice Ruth Bader Ginsburg, a supporter of the ERA, in February 2020, “Every constitution in the world written since the year 1950 … has the equivalent of an Equal Rights Amendment, and we don’t.”

If the ERA does pass, would women lose alimony, child support, and other benefits?

The Alice Paul Institute explains that sex-specific language in laws around alimony, child support, etc. could be changed to sex-neutral terms (“primary caregiver” as opposed to “mother”). This would protect these payments while avoiding the specifications of male versus female in accordance with the ERA, and would also benefit people who identify as LGBTQ. Legislators would have two years after ratification to make these shifts. 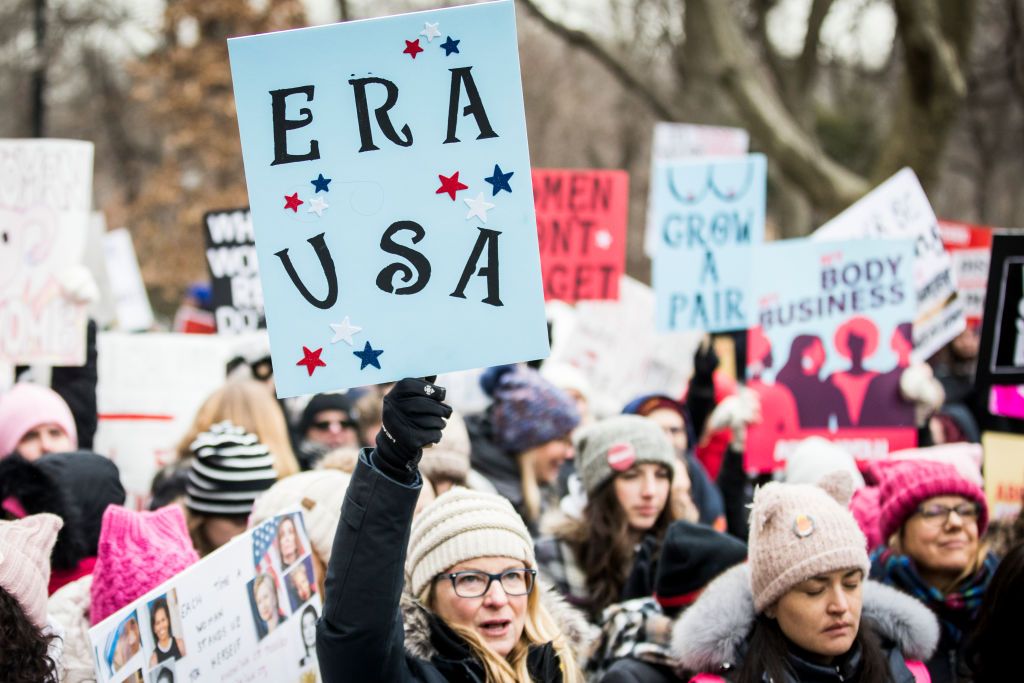 How do I get involved?

If you want to support the ERA becoming law, you can donate to advocacy groups such as the Alice Paul Institute and the ERA Coalition. Each provide “toolkit” materials, available for free download, which you can post on social media in an effort to raise awareness.

The ERA Coalition also provides a free tool that allows you to input your zip code and learn if your state and local representatives support ERA bills. If not, you can contact them directly via call, email, or letter urging them to become a cosponsor of the proposal.