Automotive and outdoors retailer Super Retail Group has been thwacked with a near 20 per cent profit slump in the December half after costs to remediate underpaid staff, bushfires and drought ravaged the business.

Reporting its half-year earnings on Thursday morning, the company – which owns Rebel Sport, Supercheap Auto, Macpac and BCF – said its net income declined 19.9 per cent for the period, weighed down by one-off costs including a $12.6 million expense related to backpaying underpaid workers and the impact of a new accounting standard. 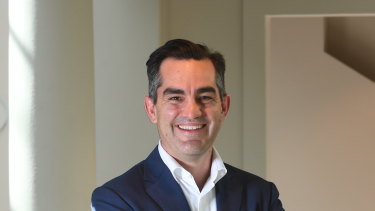 Underpayment costs have weighed on the result of Super Retail Group, though chief executive Anthony Heraghty says he’s pleased with the first few weeks of the June half.Credit:Peter Braig

Profit excluding those charges dropped 9.6 per cent to $74.1 million, in line with markets expectations after the company warned investors in January its outdoor divisions Macpac and BCF had been badly affected by the fires.

Revenue for the group came in at $1.44 billion, up 2.9 per cent on the prior corresponding half, driven largely by strong sales in Rebel and Supercheap Auto, which account for over two-thirds of the company. Like-for-like sales grew 1.7 per cent across the whole group.

On a per-segment basis, Supercheap Auto grew like-for-like sales by 2.4 per cent, and Rebel gained 3.3 per cent, fuelling much of the company's overall sales growth.

However, profits were hurt by increased discounting across the company, which saw profit margins contract across each of the company's divisions.

Kathmandu competitor Macpac continued to drag down the company's results, with like-for-like sales down 7 per cent, declining in both New Zealand and Australia. Earnings before interest and tax decreased by $2.3 million for the segment.

Chief executive Anthony Heraghty said Super Retail Group was pleased with the start to the June half, given the "challenging" December half.

For the new year, like-for-like sales at Supercheap Auto and Rebel both continued to grow, soaring 5.8 per cent for Rebel.

But BCF's sales were down 8 per cent, and Mr Heraghty warned its weak sales would weigh heavily on the outdoor retailer's profits for the second half.

"The performance of BCF reflects subdued demand in the camping and outdoors category, following an unprecedented summer bushfire season. BCF trading remained soft in the key month of January, which typically contributes the majority of second-half BCF earnings," he said.

Despite the weak performance, the retail conglomerate maintained its interim dividend of 21.5 cents per share.