Diversified developer and landlord Stockland has been hit by a spate of fashion brand closures across its portfolio, as it rolls back its three "R" investment strategy of retail, residential and retirement assets and pivots to the logistics and office sectors.

Although there have only been 35 store closures, the group is now offering a 9 per cent discount on rent in a bid to backfill the vacated sites. 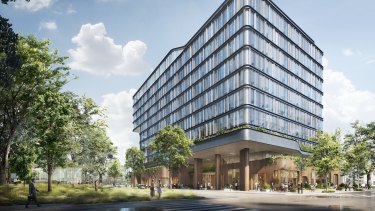 Stockland chief executive Mark Steinert noted that over the past few months, JeansWest, Harris Scarfe, Bardot, Curious Planet and Colette have all gone into administration and of the 35 impacted tenancies "about 70 per cent are under advanced negotiations with new retailers".

He said the group is using the opportunity to move its retail centre tenants away from fashion and towards food catering and other services that yield higher rents.

"We are highly confident the remix is working and will underpin future sales growth," Mr Steinert said.

In the half-year result to December 31, he said residential operations remain at the forefront, but there will be a re-weighting towards to the commercial property side, which has risen to be worth about $4.3 billion, equal to 26 per cent of the group's portfolio by asset value.

For the half, Stockland's funds from operations (FFO), the most accurate measure of the performance of real estate investment trusts, fell 5.6 per cent to $384 million, because of the timing of settlements in the residential sector and some non-core asset sales.

The company is forecasting a lift in the second half of the financial year.

Mr Steinert has said the full year guidance was unchanged due to the drag from the retail failures, but he expected improvements in 2020-21, as a number of office and logistics assets are completed and rents start to flow.

There is a new office tower planned for the Piccadilly Shopping Centre in Sydney's Pitt Street.

Residential FFO was $134 million, down 6 per cent, with results skewed to the second half because of high-margin Sydney projects and the timing of the settlement of The Grove and Merrylands Court developments.

Saranga Ranasinghe, vice president at Moody’s Investors Service, said Stockland's interim result reflected the challenging retail environment, noting the developer reported "negative average rental growth in its retail segment and expects this weakness to continue over the next 12 to 18 months as it continues to update its tenant mix".

The company announced an interim dividend of 13.5¢.