Seven West Media chief executive James Warburton has flagged another round of cost cutting after the television and publishing company posted a $66 million loss for the December half.

The Kerry Stokes controlled media company will look to take a further $20 million worth of costs out of its operations after weak advertising market conditions caused its revenue to fall by 3 per cent, to $772.4 million. 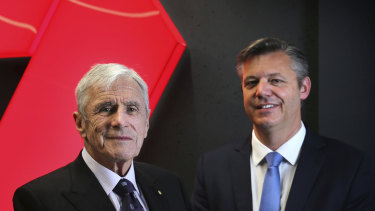 Excluding significant items including a write-down of its television license and "onerous" content contracts,  Seven West Media posted a profit of $98.2 million.

Mr Warburton said he would continue to apply "entrepreneurial thinking" to the business and flagged he was open to "transformative" deals,  implying a major transaction involving the company is on the table.

"My mandate is to dramatically change the business which means transformative M&A opportunities are on the agenda. I believe we have the team, the platform and the strategy to transform and grow this business to increase shareholder value," he said.

Seven expects underlying EBITDA to be between $165 million and $175 million for the full financial year.

The company said  "further operational cost and cash savings have been identified for execution in the second half which are expected to deliver an additional net $20 million cash benefit in FY21 over and above the $45 million in savings already implemented."