Kerry Stokes’ Seven West Media has swung to net profit of $116.4 million for the fiscal half year as the television and publishing company flagged a further $30 million in cash savings.

The media company’s revenue fell 9.9 per cent to $644.2 million for the six months to December 26 due to weak advertising market conditions related to the coronavirus pandemic and a reduction in production revenue. Seven West Media chief executive James Warburton also revealed the company had reduced net debt by 42 per cent to $329 million. 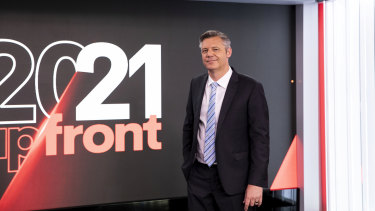 “These strong operating performances have been delivered after a radical transformation of the cost base,” Seven West Media chief executive James Warburton said. “The $170 million gross cost out remains on track and we have identified another $30 million of cash savings.

Seven posted underlying earnings before interest, tax, depreciation and amortisation of $165.7 million, an increase of 24.4 per cent compared to the same time the previous year. Excluding significant items (largely related to onerous contracts), total costs fell 17.5 per cent to $493.7 million. The $116.4 million profit was compared to a $49.4 million loss the previous year.

“Improving Seven West Media’s balance sheet has been one of our company’s key objectives over the past 12 months,” he said. “We have made significant progress in addressing this, with a 42 per cent reduction in net debt year on year – ahead of our plan at the beginning of the financial year.

“We have also retired $150 million of debt since the end of the half year. This significantly improved financial position has provided us greater optionality in our asset sale processes to ensure we maximise value for our shareholders.”

Mr Warburton did not provide full year earnings guidance but said he expected revenue for the third quarter to be a 7 to 10 per cent improvement on the same time the previous year.

Like many media companies Seven was severely affected by the coronavirus pandemic because of large falls in advertising revenue. The company ended renegotiating with its banks and cut a large amount of jobs to adapt to market conditions. Seven has also been trying to sell off several assets including its studios division and digital companies such as Airtasker and SocietyOne. A sale of the TX Australia, the tower business it jointly owns with Nine Entertainment Co (owner of this masthead) is on hold.