The Stokes-family controlled Seven Group Holdings on Wednesday reported a significant uplift in half-year revenue and underlying earnings to record levels, driven by strong results in the conglomerate's industrial services and energy segments including WesTrac, Coates Hire and Beach Energy. 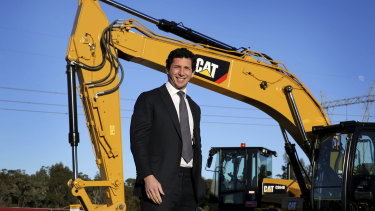 While underlying net profit after tax was up 3 per cent to $255.7 million, its statutory profit fell 26 per cent, dragged down by a $112 million writedown of its 40 per cent stake in the struggling Seven West Media.

Seven Group chief executive Ryan Stokes said the group was unhappy with the media company’s $67 million loss for the six months to December as a weak advertising market hit the company's bottom line. "I think the reality is we took market share, revenue share was market-leading, but the revenue was just not there," he said.

But Mr Stokes expressed confidence in Mr Warbutron's leadership and support his team's "very clear plan" which was focused on content-led growth, transformation and simplification of the business.

"James is relatively new in the role, six months in," Mr Stokes said. "I think the team has got a very clear focus and we support them on what they need to do."

Mr Warburton on Tuesday said he was exploring mergers and acquisitions to help transform the business, indicating that every asset was on the table including its production arm, Seven Studios.

"We do see opportunity in consolidation and would support James's ambitions," he said.

When asked if Seven Network would be up for sale, Mr Stokes said: "We see opportunity with media … I certainly believe in the value of how you can optimise a large-audience business that free-to-air is."

Elsewhere in Seven Group, the boom in the price of iron ore and a flurry of activity in mining and infrastructure helped drive impressive results for the company's WesTrac heavy equipment business and Coates Hire business.

"We are doing more hours currently in WesTrac in WA in terms of people working and delivering than what we were doing at he height of the boom in 2012-13 when we were delivering all of those trucks into the Pilbara," Seven Group chief financial officer Richard Richards said.

To support the adoption of autonomous technology by Australia's major miners, WesTrac is building a technology facility in Collie, WA, to run training courses on autonomous operations. It will be the only autonomous haulage system training facility outside the Caterpillar proving ground in Arizona, USA.

Seven Group's 28 per cent-owned oil and gas producer Beach Energy maintained its "strong financial performance" following the partial sale of its Victorian Otway interests, robust production and earnings back by a 4 per cent oil price increase in oil price and a 6 per cent realised gas price rise, Seven said.