Mr Forrest told The Age and The Sydney Morning Herald the FIRB should “consider some facts” when assessing if JBS’s $500 million bid for Huon should proceed. 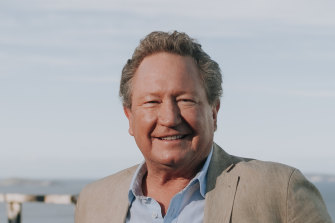 Andrew Forrest’s Tattarang could decide the fate of the takeover of Huon. Credit:Lee Griffith

“JBS has been accused and has had executives go to trial over serious price-fixing allegations,” he said. “Since the last time [FIRB] gave JBS approval its founders and controlling shareholders have spent a large stretch of time in jail for bribing hundreds of Brazilian politicians.”

“And when it’s been put to them that they don’t run a ‘no pain no fear’ operation, all they’ve come out with is a whole heap of protestations.”

Mr Forrest’s comments are part of the mining billionaire’s latest move in an ongoing battle for Huon being waged between the Fortescue Metals founder’s investment fund Tattarang and JBS.

Mr Forrest and Tattarang’s campaign for Huon officially began in June when the billionaire took a 7 per cent stake in the producer with a view to help the company improve its environmental standards and become a leading player in the industry.

However, JBS lobbed an unexpected, $3.85-a-share takeover bid in early August, which prompted Mr Forrest to increase Tattarang’s stake to 18.5 per cent and challenge the meat processor to bolster its animal welfare and sustainability credentials, with a potential threat of blocking the deal if such commitments weren’t made.

JBS then answered by launching a second offer for Huon via an off-market takeover bid, a move that could give control of Huon to the company without having to gain approval from a 75 per cent majority of shareholders.

Mr Forrest said the secondary takeover bid was a panic move by JBS and said the deal had a “long way to play out” but did not indicate if Tattarang would consider launching its own, competing takeover bid for the company.

“I’m not in a position to rule anything in or out,” he said.

At the core of Mr Forrest’s demands is for JBS to adopt the same no pain, no fear animal welfare standards Tattarang’s Harvest Road beef processor adheres to. These dictate that animals should be free from hunger, discomfort, pain, and fear and have the freedom to live normally before death.

JBS has said it already uses this model and has done so for some time, with chief executive Brent Eastwood saying the business is “one of the best companies in the world for animal welfare practices”.

However, on Thursday, Mr Forrest doubled down on his challenge, calling on the company to prove its animal welfare standards by inviting customers in to do spot audits on its meat processing plants. Tattarang has also launched an ad campaign to further pressure the company into acting.

“JBS has very serious animal husbandry question marks. They have been declared by the Animal Welfare Institute in North America to be operating seven of the ten worst, large livestock slaughter plants in America for cruelty,” he said.

“You are the largest in the world, so instead of denying it and sending out spin doctors you should say ‘yep, we’ve got a problem, and this is what we’re going to do to fix it’.”

JBS says it undertakes regular customer, government and third-party audits of its facilities and that the company complies with the Australian Animal Welfare Standards and Guidelines. The company has said it will release more information about its animal welfare practices in September when shareholders are expected to vote on the Huon takeover.

Mr Forrest has also briefed Tasmania’s Premier, Peter Gutwein, saying that Tattarang was a long-term investor in Tasmania and would continue to invest in the state’s food industry and green energy industry, with Fortescue currently investigating the development of a green ammonia plant in the region.