The death of Supreme Court Justice Ruth Bader Ginsburg mere weeks before the 2020 elections is likely to intensify an already-pitched battle for control of the Senate, putting pressure on key Republicans up for reelection in November.

With Senate Majority Leader Mitch McConnell already promising to give President Donald Trump’s nominee a vote on the Senate floor, vulnerable Republican senators, including Sen. Susan Collins of Maine and Sen. Lindsey Graham of South Carolina, are almost certain to play a critical role in any nomination fight over a Ginsburg successor. Even races without a direct link to the nomination fight are certain to be reshaped by surges of partisanship and campaign cash.

Republicans have a 53-47 edge in the Senate and can confirm a new justice with only 50 votes. But the Senate GOP is defending incumbents in 10 states where national Democratic groups are spending millions on attack ads while only two Democratic incumbents are considered vulnerable.

Among the most vulnerable incumbents is Collins, whose vote for Supreme Court Justice Brett Kavanaugh directly contributed to her declining popularity in the state. Collins, a moderate Republican who supports abortion rights but has voted for many of Trump’s conservative judicial nominees, is in a tough race with Maine House Speaker Sara Gideon. 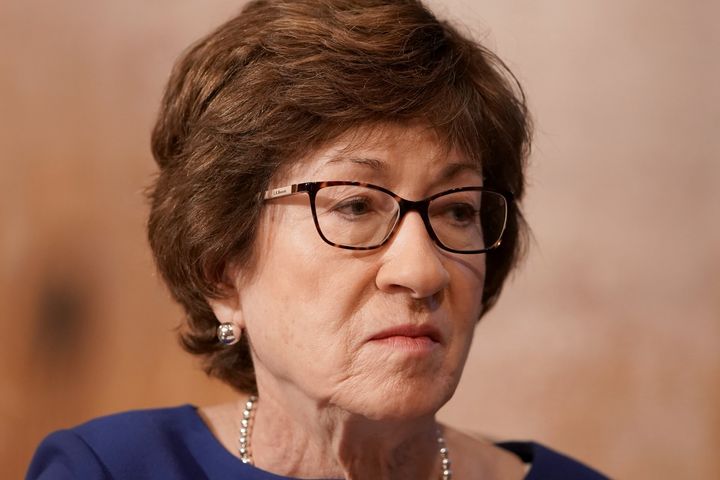 Collins told New York Times reporter Jonathan Martin earlier this month she opposed confirming a Supreme Court justice close to the election and would also oppose voting on one during a lame-duck session of Congress in November if there is a change in presidents.

In a letter sent Friday night to GOP senators and obtained by The Washington Post, McConnell instructed his fellow Republicans to avoid announcing their opposition to a vote.

“Over the coming days, we are all going to come under tremendous pressure from the press to announce how we will handle the coming nomination,” McConnell wrote. “For those of you who are unsure how to answer, or for those inclined to oppose giving a nominee a vote, I urge you all to keep your powder dry. This is not the time to prematurely lock yourselves into a position you may later regret.”

Though Collins is the candidate most directly endangered by a new fight over the balance of the court, the vacancy is likely to supercharge every competitive race, from liberal-leaning Colorado to swing state Georgia to evangelical-heavy South Carolina.

The vacancy could also alter the major issues debated in an election that has so far focused primarily on the coronavirus pandemic, the related economic downturn and race relations. Abortion rights and the fate of the Affordable Care Act – the Supreme Court is expected to hear a case on its constitutionality later this year – could move to the forefront.

However, the most immediate effect is likely to be a surge of campaign donations into what are already the most expensive set of Senate elections in history. The battle over Kavanaugh’s nomination energized Democratic small-dollar donors like few other political events: They sent $12 million to North Dakota Democrat Heidi Heitkamp, who had raised relatively little from grassroots donors before her vote against the conservative nominee. (Heitkamp lost to GOP Rep. Kevin Cramer.)

In Maine, Gideon has benefited from millions of dollars in small-dollar donations collected in the wake of the Kavanaugh fight for whomever the Democratic nominee against Collins turned out to be. Collins, on the other hand, has benefited from donors linked to the conservative judicial group The Federalist Society, which has had a powerful influence on Trump’s choices for judicial vacancies.

Money had already begun flowing to Democrats on Friday night. Crooked Media, the podcast company started by alumni of President Barack Obama’s administration, announced it had raised $600,000 in just two hours for a campaign dedicated to ousting McConnell as majority leader.

“I have never seen the @actblue ticker move this fast ― it’s absolutely insane,” tweeted Mike Nellis, the CEO of the progressive digital firm Authentic Campaigns, referring to the service most Democrats use for online fundraising.

Beyond Maine, two other races take on newfound significance following Ginsburg’s death: a special election between GOP Sen. Martha McSally and former astronaut Mark Kelly in Arizona, and the race between Graham and Democrat Jaime Harrison in South Carolina.

Arizona Gov. Doug Ducey (R) appointed McSally to fill the the term of the late Sen. John McCain until a special election could be held. Winners of special elections are typically seated shortly after their victories, instead of in January like the winners of standard Senate elections.

The Arizona Republic reported Friday that Kelly, who has held a consistent lead over McSally in both public and private surveys for more than a year, could potentially take his seat in late November. That timing could prove crucial if McConnell waits until a lame-duck session of Congress to hold a vote on a nominee.

A New York Times/Siena poll of Arizona found voters trusted Biden more than Trump, 53% to 43%, to pick a new member of the Supreme Court. The same poll gave Kelly a 50% to 43% lead.

But results were more mixed in North Carolina, another state essential to Democrats’ path to a Senate majority. Voters in the Tar Heel State were split on which presidential candidate they trusted more to pick a new member of the court: 47% preferred Biden, while 44% preferred Trump. Similarly, the race between Democrat Cal Cunningham and Republican Sen. Thom Tillis was tight,  with Cunningham leading 42% to 37% and a significant chunk of voters remaining undecided.

The fight could also simply send voters back to their partisan corners, making life more difficult for Senate candidates like Republican Sen. Cory Gardner in Colorado, Montana Gov. Steve Bullock (D) and Democratic Senate candidate Barbara Bollier in Kansas, who are depending on voters to split their ballots.

Graham, as chairman of the Judiciary Committee, will help lead the effort to confirm Trump’s nominee. His role as a fierce defender of Kavanaugh during the contentious 2018 nomination cemented his newfound alliance with Trump, shed his image as a moderate in the style of McCain and poisoned his relationships with many Democrats he had been cordial with.

Graham taking on a high-profile role in shepherding a nominee could help his own fundraising and remind South Carolina’s conservative electorate of the risks of backing Harrison.