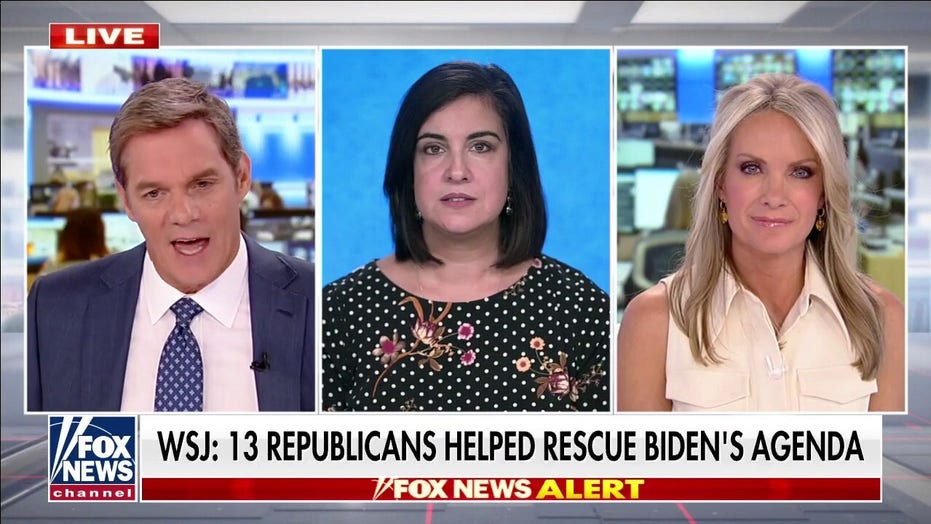 Rep. Nicole Malliotakis, R-N.Y., discusses why she voted for the $1.2 million infrastructure bill and being among 13 Republicans that supported it.

After much backlash from fellow House Republicans, Rep. Nicole Malliotakis, R-N.Y., on Tuesday defended her decision to vote for the $1.2 trillion infrastructure bill.

Malliotakis told Fox News there is “incredibly important” infrastructure in the measure.

“I read this bill and it is cover to cover infrastructure,” she said on “America’s Newsroom.”

“The other 550 billion is for ports, airports, seaports, ferry systems, coastal resiliency projects like the east shore sea wall. That is so important to my district,” she added.

“Sewer systems, which is so incredibly so important following [Hurricane Ida], the damage that took place in New York City. Upgrading our subway signals to a communication-based train control we’re still relying on pre-World War II equipment in some subways,” Malliotakis explained. “So for an aging city like New York City, this bill was incredibly important.”

House Republicans opposing the Democrats’ $1 trillion infrastructure package reacted swiftly late Friday after their colleagues across the aisle – aided by 13 members of the GOP – passed the legislation.

The bipartisan bill’s passage was viewed as a win for the Biden administration and ended weeks of deadlock between moderate and progressive Democrats.

Some Republicans who voted “no” called the bill “communist” or “socialist” and decried their GOP colleagues who voted with Democrats.

Rep. Lauren Boebert, R-Colo., called the bill “garbage” and argued that House Speaker Nancy Pelosi couldn’t get it passed without help from the 13 Republicans. The vote was 228-206, with six Democrats, all progressives, voting against it.

Rep. Marjorie Taylor Greene, R-Ga., listed the names of the 13 Republicans who, in her words, “handed over their voting cards to Nancy Pelosi to pass Joe Biden’s Communist takeover of America via so-called infrastructure.”

Many of the Republicans who voted in favor of the legislation said the benefits of the bill for the individual states they represent would outweigh its massive price tag.

Six members of the “Squad” voted against the bill, including Democratic Reps. Alexandria Ocasio-Cortex of New York, Ayanna Pressley of Massachusetts, Rashida Tlaib of Michigan, Ilhan Omar of Minnesota, Cori Bush of Missouri and Jamaal Brown of New York.

The bill, which calls for funding for physical infrastructure projects such as roads, bridges, water pipes and broadband internet, will now advance to President Biden’s desk for final approval. Senators already voted 69-30 to approve the legislation in August.

Malliotakis doubled down, saying that the reality is that the infrastructure in the bill is the type of investment that people actually pay taxes for. The congresswoman added that it has the “basic infrastructure needs” taxpayers expect from the government, but has been “neglected for decades.”

“As you reported earlier I believe we significantly took away the leverage from the socialist squad. It is why AOC and the others voted against it,” Malliotakis told host Dana Perino.

“They knew if the true infrastructure bill passed the spotlight would go onto their social spending bill that includes the I.R.S. agents, amnesty, giveaways to those in the country illegally, the taxes, vaccine mandates, and penalties. All of that that we remain opposed to and we’re are going to fight tooth and nail with the moderate Democrats to stop.”

Malliotakis responded to the criticisms against her support of the bill from her GOP colleagues, saying a lot of people are confused with the fact that there are “two different bills.” She said the infrastructure bill is the bipartisan bill that is “cover to cover infrastructure.” Even former President Trump blasted the GOP House Representatives who voted for the bill.

“The other bill is the social spending bill that all of us are opposed to,” she said. “I give President Trump credit for being the first to invest in infrastructure. He also wanted to spend $1 trillion in America’s infrastructure. He understood how important it is to our vitality, to our economy, to keep up with economic growth and pace. This is something that I have said has been neglected for decades. We’re opposed to the I.R.S. Agents and the illegal immigrants and amnesty and all the other stuff AOC is pushing but I believe we’ve taken away their leverage.”

“This spending bill will either continue to be reduced because remember, it started with $3.5 trillion to $1.7 trillion,” Malliotakis continued. “They took out the amnesty provision but there are still stuff for illegal immigrants that we have to continue to fight. I will work with my colleagues to do that. I think just the fact that they are crying about it just tells you that they are the losers here.”