Home » Rep. Ilhan Omar decries attacks on Jews while warning against equating 'legitimate criticism' of the Israeli government with anti-Semitism

Democratic Rep. Ilhan Omar of Minnesota on Wednesday denounced a recent spike in attacks on Jews in the US and abroad, while warning against treating “legitimate criticism” of the Israeli government as synonymous with anti-Semitism.

The Minnesota Democrat went on to say, “And it also means we cannot equate legitimate criticism of the Israeli government, its policy, and its military occupation with antisemitism. Connecting the actions of a foreign country’s government and military with an entire faith does nothing to keep the Jewish people safer.”

Omar’s tweets came after a group of Jewish Democrats in the House on Tuesday sent a letter to President Joe Biden decrying House lawmakers for calling Israel an apartheid state and accusing it of committing acts of terrorism. The letter didn’t explicitly name Omar or any other lawmakers, but she was among a group of progressive Democrats who employed such rhetoric regarding the Israeli government in over the past few weeks.

In a tweet amid the recent fighting between Israel and Hamas, for example, Omar said, “Israeli air strikes killing civilians in Gaza is an act of terrorism. Palestinians deserve protection. Unlike Israel, missile defense programs, such as Iron Dome, don’t exist to protect Palestinian civilians.” 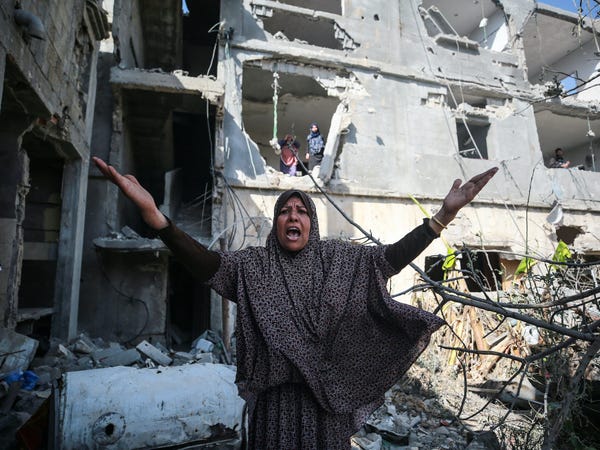 There’s a growing schism in the Democratic party over US-Israel relations, with progressives like Omar urging the US government to take a more nuanced approach that shows more concern for Palestinians and human rights.

Progressive Democrats have sought to normalize criticism of the Israeli government, and a number of them — including Omar — were heavily critical of Biden’s response to the recent Israel-Hamas fighting. Biden offered full-throated support to Israel as airstrikes pummeled Gaza in response to Hamas rocket attacks, most of which were intercepted by the US-funded Iron Dome defense system. And the president initially tiptoed around offering any public support for a cease-fire.

As the fighting was still ongoing, Omar at one point said the administration was “devoid of empathy and concern for human suffering.”

The fighting killed over 250 people, predominantly Palestinians, including dozens of children.

With a cease-fire in effect as of last Friday, Secretary of State Antony Blinken visited leaders in the Middle East this week as part of an effort to ensure the fragile peace holds up. Among those Blinken met with was Palestinian Authority President Mahmoud Abbas.

During his visit to the region, Blinken announced that the US would reopen a consulate in Jerusalem to handle diplomatic relations with Palestinians, which was shut down under the Trump administration.

The US gives Israel roughly $3.8 billion in military aid per year, on top of selling it weapons. Democrats like Omar have called for the US to consider conditioning aid to the Israeli government in relation to the peace process and occupation of Palestinian territories. Sen. Bernie Sanders of Vermont and Rep. Alexandria Ocasio-Cortez of New York both recently introduced resolutions aimed at blocking a $735 million arms sale to Israel.