Who would you pick this weekend in a game between the New York Jets and Carolina Panthers? The Cleveland Browns and Kansas City Chiefs? The Pittsburgh Steelers and Buffalo Bills?

A learned football fan can make informed forecasts about games because there is an agreement about the size of the playing field. It’s been the same for decades. An NFL field is 100 yards long. Twenty yards total for end zones. Fifty three yards and change across.

You know the parameters of a football gridiron. So, it’s “easy” to determine which team has the advantage over the other on any given Sunday.

That is not the case when handicapping chances for Democratic or Republican control of the House heading into the 2022 midterms.

But the other “dimensions” of the 2022 playing field are unclear. That’s because states are now undertaking the once-a-decade effort to “redraw” the lines of congressional districts, based on the 2020 Census. Redistricting will help explain which party may control the House come January 2023. And we’re starting to get clues about the playing field for 2022.

Both sides believe their side will prevail in next year’s midterms. 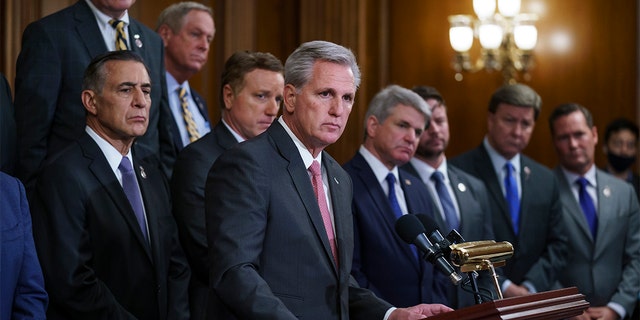 “I’m looking forward to being Speaker in the next Congress,” proclaimed House Minority Leader Kevin McCarthy, R-Calif., during a visit to the White House in May.

The Census Bureau released a set of data in mid-August which could prove essential to determining which leader wields the gavel come 2023.

“This is the most partisan political activity in American politics,” said politics and history professor Michael Bitzer of Catawba College, in Salisbury, North Carolina. “If you draw the lines, you pretty much get to dictate which party will win a particular district.”

There are lots of ways the parties can influence the contours of congressional districts.

“Redistricting can be based on doing things like packing voters into a district that have really helped to get Democrats elected from urban areas. But that dilutes the Democratic strength, perhaps in suburban and rural areas,” said Bitzer.

The states are now studying the demographic information to craft the borders of the nation’s 435 House districts. Each state does it differently. Article I, Section 4 of the Constitution requires states establish “the Times, Places and Manner of holding Elections for Senators and Representatives.” Congressional district boundaries are an issue of “manner.”

Republican-controlled legislatures or panels will map the lines for 187 House members. Democrats only get to etch out lines for 49 seats. Non-partisan commissions handle the rest.

“With so many legislatures controlled by Republicans, they will be able to influence the map,” said Bitzer.

Republicans appear to have an advantage when it comes to redistricting, controlling the process in key states. But the GOP is adamant they’re not leaning on redistricting alone to propel them to the House majority.

“Republicans are not relying on redistricting to help us win the majority,” said Michael McAdams, spokesman for the National Republican Congressional Committee (NRCC), the national organization devoted to electing House GOPers. “There’s not going to be 218 safe Republican seats that come out of redistricting.”

McAdams is right about that. Republicans just need to draw the lines a certain way in a few key states to give them a boost.

The west is growing fast. Montana gained one seat for the first time since 1990. The addition of a seat with the GOP in charge of the redistricting process means the party likely picks up a seat in Montana.

The Midwest is a problem for Democrats.

“We see fewer states growing by 10 percent or more and no states in the northeast or Midwest growing that rapidly,” said the Census Bureau’s Marc Perry when it rolled out some of the new demographic data.

Ohio and Michigan each lose a seat.

Republicans control the Ohio maps. Republicans could dilute Democratic power by blending the district of Rep. Marcy Kaptur, D-Ohio, with a vacant Democratic district in Cleveland. Democrat Shontel Brown won the primary for a special election there later this year. But Republicans already lopped Kaptur’s old, Toledo-based district together with another Cleveland-area district a decade ago. Kaptur defeated former Rep. Dennis Kucinich, D-Ohio, in the 2012 Democratic primary. Kaptur’s district now snakes across Lake Erie from Toledo to Cleveland. The GOP could try a similar tactic to the one they used on Kaptur and Kucinich this time around.

Republicans face a conundrum in greater Cincinnati. Rep. Steve Chabot, R-Ohio, currently represents a district which encompasses the west side of the Queen City, then juts up into conservative Warren County in the northeast. Rep. Brad Wenstrup, R-Ohio, represents the east side of Cincinnati. But Wenstrup’s district then drops into GOP-friendly rural stretch of land along the Ohio River.

Cincinnati is a Democratic city. But there’s no Democratic U.S. Representative in Washington from there. That’s because redistricting cleaves the city, attenuating Democratic influence.

An independent commission draws the Michigan lines. One fewer seat means the Michigan delegation splits 7-6. Expect a brawl over which party prevails and whose districts are merged.

“There’s a lot of anxiety,” said former Rep. Bart Stupak, D-Mich., who faced redistricting in 2000 and 2010. “Whoever is the odd person out, will probably step aside.”

But not all is rosy for the GOP in redistricting.

Democrats control the process in Illinois. They will likely try to engineer a map that diminishes the downstate electoral power of Reps. Rodney Davis, R-Ill., Mike Bost, R-Ill, and Mary Miller, R-Ill.

California dropped a seat for the first time in its history after the 2020 Census. Expect Democrats to put the squeeze on the GOP in the Golden State. And West Virginia loses one of its three House seats. Republican members hold all three seats there. So the GOP comes up short in West Virginia.

The summer Census data came in late. States are now rushing to map out districts quickly. Haste could trigger lawsuits, dragging out the process.

Latino and Asian American populations fueled U.S. population growth. But the problem for Democrats is that they don’t win the votes of non-white voters in the south by enough of a margin to outpace Republicans. That’s where voter participation in an off-year election could serve as a better barometer to judge which party controls the House.

In other words, we won’t really know the field on which candidates play the 2022 midterms for a few months. But we may not even understand the composition of the playing surface until after we see who is motivated to get to the polls.