One of Australia’s largest proxy advisers, ISS, is recommending REA Group investors vote against the re-election of Optus chief executive Kelly Bayer Rosmarin to the property giant’s board amid the fallout from the telco’s hacking scandal.

ISS re-issued its proxy report on Friday for the REA Group AGM on November 10, and said “on further review” it was changing its recommendation on shareholders voting Bayer Rosmarin to the real estate listing group’s board. She became a director in January this year. 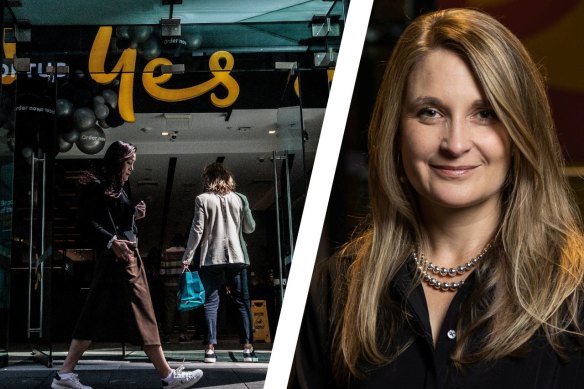 “Given the reported significant effect of the data breach on Optus, which is owned by Singtel, Optus and Singtel shareholders should expect exclusive commitment from Ms Bayer Rosmarin to their businesses at this time,” said the report.

Bayer Rosmarin will be paid $110,000 for her REA board seat. She will also be a member of REA’s audit risk and compliance committee.

ISS head of research Vas Kolesnikoff said it is always contentious when a chief executive seeks external roles on top of their day job, but said it is particularly outrageous given the challenges at Optus.

“You’ve got a massive Optus hack, and the CEO is very apologetic. But meanwhile, you’re devoting your time in other things. I find it really difficult to reconcile.”

Rosmarin stepped down from the board of fintech OpenPay in January to “better manage her portfolio of board commitments”, the buy now pay later group said in an announcement of her resignation.

Rosmarin is also a director of London Stock Exchange-listed Airtel Africa, which counts Optus owner SingTel as a major investor.

Optus is still dealing with the fallout of the hack, in which hackers also accessed 150,000 passport and 50,000 Medicare numbers. Of the 9.8 million whose data was accessed, Optus believes 7.7 million do not need to replace documents. That could be because their identity document data was not collected, was not recorded properly, or is out of date and cannot be used to verify their identity.

A full report by Deloitte that Optus has commissioned has yet to be completed. It will not be made public for security reasons, according to Optus.

Bayer Rosmarin’s election to the REA board is almost certainly assured thanks to the 61 per cent stake held by Rupert Murdoch’s News Corp. But a rejection by minority investors would be a significant black mark against REA, Bayer Rosmarin, and Singtel.

“Let’s go back to basic principles and say, OK, you get paid truckloads of money when you do all these important things. And protecting customers – who are supposedly the reason why you’re making money – is very important,” Kolesnikoff said.

ISS has also recommended a vote against the grant of performance rights to REA chief executive Owen Wilson on the basis that the company has failed to disclose quantified targets for his incentives. REA’s 2023 long-term incentive grant was also described as excessive.