White House press secretary Jen Psaki deployed a colorful bit of sarcasm Thursday in response to a question regarding the setbacks that continue to pile up for the Biden administration.

It was a bitter day for the White House that saw the Supreme Court block President Biden’s corporate vaccine mandate and moderate Democrat senators reject a change to the filibuster needed to pass election overhaul legislation, a centerpiece of Biden’s agenda. Bloomberg reporter Justin Sink suggested to Psaki that “things seem like they are going pretty poorly right now” for the administration.

The comment drew a retort from Psaki, who said the business of the White House was difficult, and it was not the president’s job to propose frivolous, easy things.

With mention of Biden’s blocked legislative agenda, largely unsuccessful diplomatic talks with Russia, record-high inflation and soaring cases of COVID-19, Psaki was asked at what point the White House would assess that changes must be made internally.

Psaki pointed to millions of vaccinated Americans, job growth and low unemployment rates. She went on to say the administration has rebuilt alliances around the world.

Psaki blamed Biden’s stalled legislative agenda on the Democrats’ small margin in the Senate but pointed out how the president was able to get a COVID relief bill and an infrastructure bill passed.

“We could certainly propose legislation to see if people support bunny rabbits and ice cream, but that wouldn’t be very rewarding to the American people,” Psaki said, emphasizing that work in the White House is challenging. 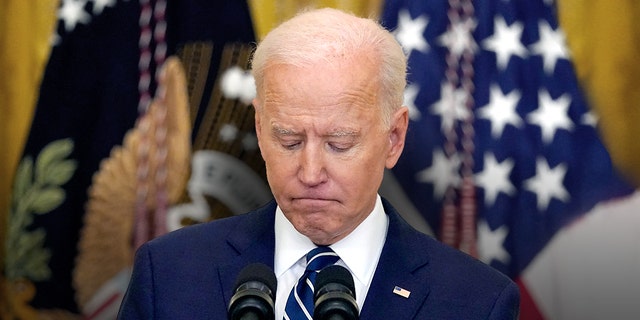 Psaki’s comments come as Biden’s approval hit a new low of 33%, according to a Quinnipiac University national poll conducted Jan. 7-10 and released Wednesday. Biden’s approval is down three points from Quinnipiac’s previous survey, which was conducted in November, with disapproval remaining unchanged.