A key question in the coming debate over the Democratic “soft infrastructure” bill is how big it should be.

President Joe Biden and his allies have endorsed a package of initiatives on early childhood programs, health care and other Democratic priorities that would add up to about $3.5 trillion in new spending over the next 10 years. Several more conservative Democrats in Congress have already signaled they think that’s too much.

One reason is politics. A key assumption, especially but not exclusively among these conservative Democrats, is that a bigger bill would be harder to defend ― that the price tag itself, $3.5 trillion, would alienate voters while a smaller bill wouldn’t.

But it’s never been clear how true that assumption is. And there’s even more reason to question it following a new survey from HuffPost and Data for Progress, a progressive polling and strategy organization.

The poll asked respondents whether they support a Democratic proposal “to increase access to health care and child care, expand the use of clean energy, and increase educational opportunities.”

But in order to test how voters feel about the government spending necessary to finance these initiatives ― and to see whether those feelings change if the number is smaller ― the survey randomly divided the respondents into three groups.

Overall, the response levels in the three groups were nearly identical: Voters support the proposal by roughly a 2-to-1 margin regardless of whether pollsters said it would require $3.5 trillion, $2.5 trillion or $1.5 trillion in new spending.

That top-line result comes with a very big, very important caveat. Voters who identify as Republicans oppose all three proposals, according to the poll. But here, too, the breakdown among the three options was interesting ― and, maybe, telling.

On the one hand, the $3.5 trillion proposal was the most unpopular among Republican voters, and it wasn’t especially close, with 61% opposing it and just 34% supporting.

On the other hand, feelings about the $2.5 trillion and $1.5 trillion options were virtually the same and closer to an even split, with about half of Republican voters opposed and more than 40% supportive. (The rest said they were undecided.)

Independent voters support the proposal at all three funding levels and do so by clear margins. But the most expensive option, at $3.5 trillion, and the least expensive, the $1.5 trillion proposal, get more support than the middle alternative of $2.5 trillion.

A Theory About Whether The Dollars Matter

It’s just one poll, and, especially with such complex results, it’s hard to draw a firm conclusion. But Danielle Deiseroth, senior data analyst at Data for Progress, offered one theory.

She said that the $3.5 trillion version likely attracts extra opposition from Republican-leaning voters (including those who call themselves independent but reliably vote Republican) because it’s the one that they already associate with Biden.

As for the actual spending figures, it’s unlikely most voters make fine distinctions once the numbers get sufficiently large. One trillion, 2 trillion, 3 trillion ― it all sounds the same, especially with all the spending that’s been taking place lately.

“If it was actually the cost that bothered these voters, I would have expected a linear reaction, with less opposition as the number kept getting smaller,” Deiseroth said. “The fact that opposition is much more pronounced at $3.5 trillion makes me think that it’s a reflection of what’s being emphasized in politics and what’s been tied to Biden directly.”

An example is Democratic Sen. Joe Manchin, whose home state of West Virginia voted overwhelmingly for incumbent President Donald Trump in the 2020 election and who ― not coincidentally ― has been among those suggesting a $3.5 trillion bill means too much spending.

Of course, how an official like Manchin could or should interpret findings like these is an open question. 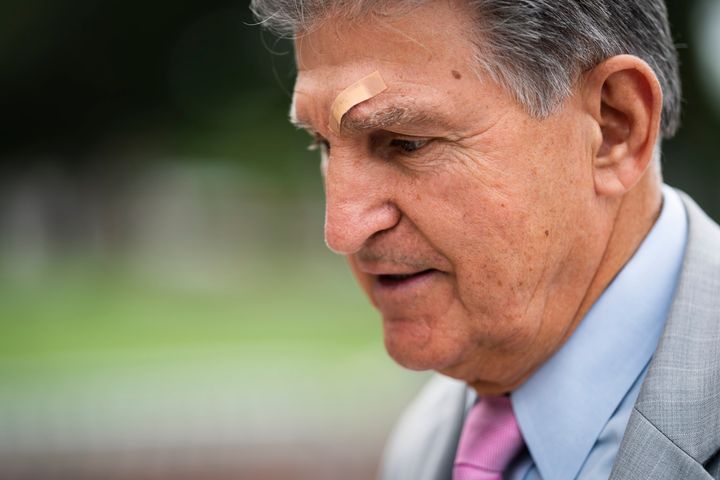 Even if the dollar figure doesn’t ultimately affect the feelings of GOP voters in his state, he could win points with them simply by breaking with Democratic leadership in a visible way. Lobbying to downsize the bill so that it doesn’t cost $3.5 trillion could help accomplish that.

But a smaller bill would also mean less money to offer seniors dental coverage under Medicare, to make community college free and to finance other programs that even Republican-leaning voters in places like West Virginia like quite a lot.

Implications For The Congressional Debate

Democrats in Congress may have still other reasons to vote one way or another on the spending bill.

Among other things, Biden and the Democrats have said they want to offset new spending in part through new taxes on the wealthy, who benefited disproportionately from cuts that Republicans enacted while Trump was president. Some Democrats wary of the spending bill, including Rep. Josh Gottheimer of New Jersey, have signaled their opposition to some of the tax hikes under consideration.

And that’s to say nothing of substantive preferences lawmakers may have, whether it’s a conviction by more conservative Democrats that $3.5 trillion would mean too much government spending in principle ― or a belief by more liberal Democrats that even that amount isn’t enough to meet the nation’s pressing needs.

The Data for Progress/HuffPost survey was based on a nationally representative sample of nearly 2,400 voters. Questions were in the field from Aug. 11 until Aug. 16. The margin of error for the top-line numbers is plus or minus 3 percentage points.