Rupert Murdoch's News Corporation has reported an earnings slump of almost 20 per cent over the past year, dragged down by weak advertising market conditions that exacerbated in the coronavirus pandemic.

The publishing, real-estate and subscription video empire saw its revenues decline 11 per cent to US$9 billion ($12.45 billion) in the year to June 30, while earnings before interest, tax, depreciation and amortisation (EBITDA) fell to US$1 billion as the company flagged an additional US$100 million in annual cost savings.

The company reported a US$1.5 billion net loss, which it attributed to writedowns on the value of Foxtel and News America Marketing. 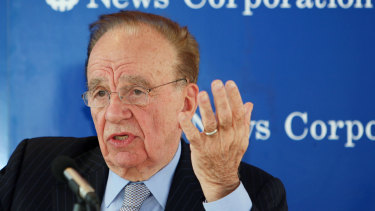 News Corporation, which locally owns The Australian, The Daily Telegraph and The Herald Sun, has been forced to drastically cut costs to adapt to market conditions aggravated by the coronavirus crisis, which caused a significant drop in advertising spending. In Australia, News Corp shut the majority of its regional and community newspapers, resulting in hundreds of job losses.

Its subscription video segment, which is largely made up of Foxtel in Australia, saw revenue dip 14 per cent for the full year to $US1.8 billion. Earnings before interest, tax, depreciation and amortisation was down 15 per cent to $US323 million.

News Corp's newspapers – excluding Dow Jones, which runs The Wall Street Journal – posted a revenue fall of 18 per cent for the year to $US2.8 billion, while EBITDA plummeted 71 per cent to $US53 million.