Australian shipbuilder Austal has increased its full year earnings guidance after reporting a 72 per cent surge in its first half profit.

The result was propelled by strong performances from its US and Australasian operations, both of which delivered stronger margins in the half.

The ASX-listed shipbuilder has reported a first half net profit of $40.8 million, compared to $23.7 million in the prior corresponding period. 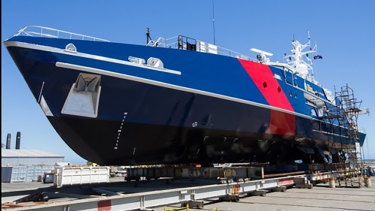 Austal's fortunes are tied to the US Navy, which has ordered a significant number of Austal vessels in recent years. These ships are built at Austal's US shipyard.

First half revenue rose a hefty 22 per cent to $1.04 billion, a record for a half-year period. While EBIT (earnings before interest and tax) rose 48 per cent to a new interim record of $59.9 million.

"It is very pleasing that the growth of earnings has continued into the first half of FY2020 following a record financial year 2019," said Austal chief executive officer David Singleton.

“Our revenue and earnings were a record for an interim reporting period, but what was more important were the ongoing strides we took in the half in ensuring that Austal is well positioned for the future," he said.

Austal has an order book of about $4.3 billion, which the Perth-headquartered company said gives it "visibility of work out to financial year 2024".

Austal's US shipyard contributed 77 per cent of the company's total revenue for the half.