NASA has released images showing extensive Antarctica snow melt over a period of days in early February that included the continent’s hottest temperature ever recorded.

On Feb. 6, Argentina’s Esperanza Base, a research station on Antarctica’s Trinity Peninsula, registered a temperature of 64.9 degrees Fahrenheit (18.3 degrees Celsius). That was about the same temperature as Los Angeles that day, NASA noted. The previous record, 63.5 degrees Fahrenheit, occurred about five years ago, in March 2015.

While the World Meteorological Organization is still verifying the February reading, new images from NASA show dramatic ice cap melting during the week the temperature was recorded.

In a news release titled “Antarctica Melts Under Its Hottest Days on Record,” the space agency shared side-by-side images showing aerial views of Eagle Island on the Antarctic Peninsula’s northern tip on Feb. 4 and Feb. 13. In the second image, about 20% of the island’s seasonal snow accumulation had melted, according to NASA. 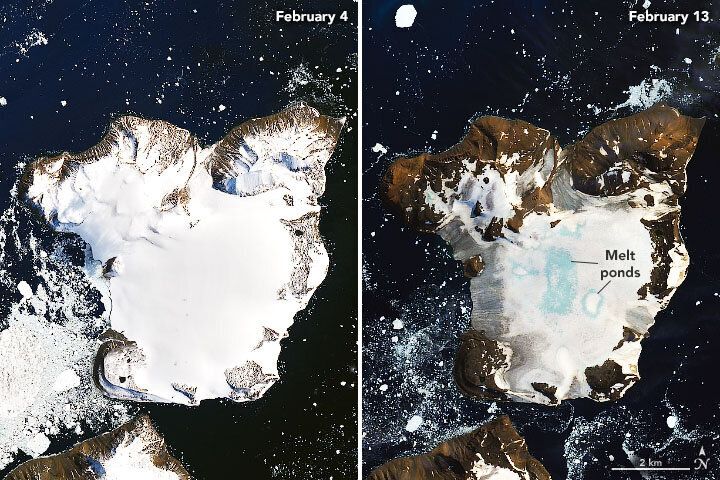 Such extensive melting happening so quickly is caused by a sustained period of temperatures above freezing, glaciologist Mauri Pelto of Massachusett’s Nichols College said in the release.

Those kinds of temperatures have become more common in recent years, according to NASA, which also noted that the Antarctic heatwave in February was the third “major melt event” of the past few months.

“If you think about this one event in February, it isn’t that significant,” Pelto said. “It’s more significant that these events are coming more frequently.“