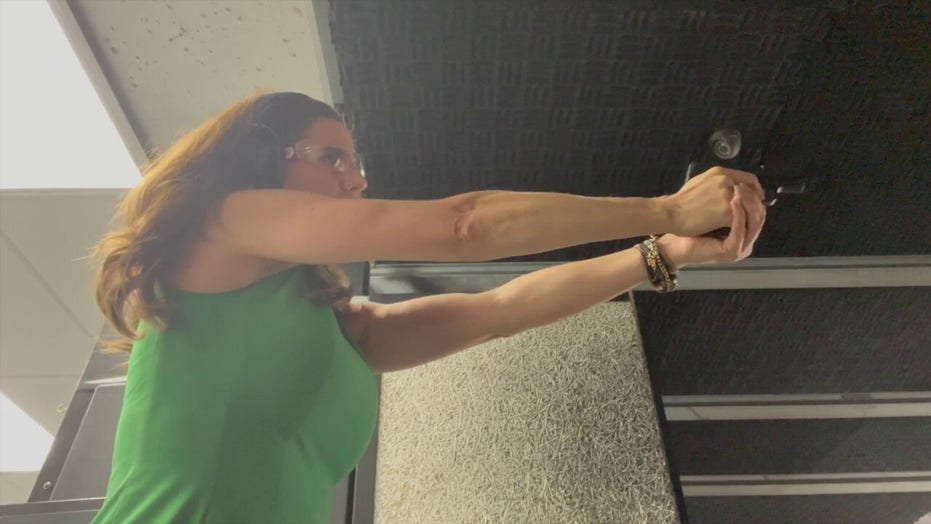 On Memorial Day, Rep. Nancy Mace, R-S.C., woke up to a call from the police.

“They wanted to know if I was home, and if I knew my house had been vandalized,” said Mace, standing on the porch of her Charleston home.

The freshman congresswoman said she was out of town when a vandal or vandals allegedly scrawled profanity and anarchist symbols in black spray paint on her property.

“When they show up to your house, and physically just, you know, try to destroy it with graffiti, it’s personal and it’s invasive and it’s violating, and it doesn’t feel good,” said Mace.

Police are still investigating, but the graffiti is gone now. Statements including “F—k you Nancy,” and “all politicians are bastards,” were scrubbed away by crews the day it happened.

A week after the incident, Mace posted on her personal Twitter page – “Buying another firearm. This one to carry.”

“I now go to the gun range almost weekly to practice shooting,” she said.

Mace said this is not the first time she has been targeted. In October 2020, a month before narrowly defeating Democrat incumbent Joe Cunningham, she reported that her car had been keyed. After receiving death threats in December, she got a concealed weapons permit.

“It doesn’t feel good that I feel like I have to look behind my shoulder every day. It doesn’t feel safe,” said Mace. “I carry a gun wherever I go today. Wherever I’m allowed to, I do carry.”

Mace, the first woman to graduate from The Citadel, said she grew up with guns in the house and is training her kids how to shoot. Mace’s children were not home when the reported vandalism occurred.

“When this happened, it really changed everything for me. I’m not going to live in fear, and I’m not going to be intimidated,” said Mace. “I think it’s one of the most empowering things that you can do is to be able to defend yourself.”

In the days after the incident, there was speculation on social media that Mace vandalized her own home, a claim the congresswoman denies.

“There was no empathy, there was only let’s re-victimize her,” said Mace. “I challenge anybody, if I did this, please send the evidence to the FBI, and please charge me with a crime. I dare you to because the evidence just doesn’t exist out there. And it’s crazy to me that this is where we are in this country, you’re seeing the downfall of civility on social media because of this.”

Mace’s campaign has since turned the reported vandalism into a fundraising opportunity. An email sent to supporters on June 3 with the subject line “Did you see what Antifa did to my house?” reads:

“Americans should be able to disagree without suffering property damage by the hands of the woke mob. If you agree, will you chip in today to help me defend against this nonsense violence?”

The congresswoman does not shy away from the idea of using the incident to her advantage.

“I think it was the Democrats that said, ‘Let no good crisis go to waste,’” said Mace, paraphrasing a quote made famous by former chief of staff to President Obama, Rahm Emanuel.

It is not clear how much her campaign has raised, but Mace said she intends to send another round of emails in the coming days.