Former First Lady Michelle Obama announced on Tuesday that she will launch a new show for kids on Netflix that debuts March 16.

“I’m beyond thrilled to share that on March 16, I’ll be launching a new show on @Netflix called Waffles + Mochi! I’m excited for families and children everywhere to join us on our adventures as we discover, cook, and eat delicious food from all over the world,” Obama tweeted.

“I’m also excited to work with [Partnership for a Healthier America] to help kids build healthy habits and help families in need cook with fresh ingredients together at home,” she continued. “I hope you’ll join us by watching on March 16!”

The show is about two best friends named Waffles and Mochi who dream of becoming chefs but are faced with a problem when everything they cook in the “Land of Frozen Food” is covered in ice. They’re eventually in for the “culinary adventure of a lifetime” at a supermarket owned by the former First Lady.

Netflix describes the show as “an exciting invitation to get kids and grown-ups together in the kitchen and connecting to cultures around the globe.” 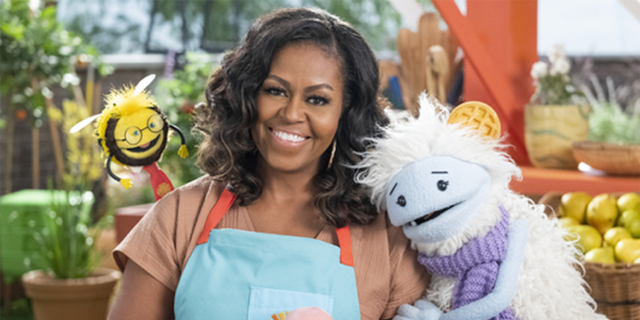 Michelle Obama announced on Tuesday that she will launch a new kid’s show on Netflix that debuts March 16.
(Netflix)

The show is produced by the Obamas’ production arm, Higher Ground Productions, and former President Barack Obama is listed as an executive producer.

The Obamas launched Higher Ground in 2018 in an effort to produce a diverse mix of content, which includes a scripted series, an unscripted series, a docu-series, as well as documentaries and features, according to a previous press release from the streaming giant, which announced the multi-year agreement.