Listed real estate advisory and agency group McGrath has stemmed its losses considerably, with a concerted focus on costs, new rent rolls and a rebound in the underlying housing market aiding its bottom line, as it tipped similar conditions would continue into the coming year.

Consolidation of franchise offices, a new headquarters and a turnaround at its company-owned operations, helped push its loss down to $1 million for the December half, from a $9.6 million loss for the same period last year.

McGrath also booked a revenue jumped of 15 per cent to $48.9 million, while cash flow stood at $8.1 million. 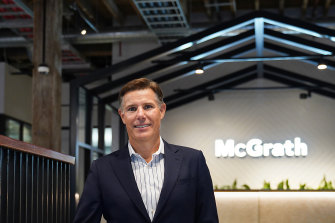 "The improved market conditions assisted us, but we have worked hard on a number of initiatives that have improved the business operations," Mr Lucas said.

"The trend we have seen in the first half, we expect to see a continuation of in the second half."

McGrath was founded in 1988 by John McGrath, often dubbed Mr Sydney property, and listed in 2015. It is comprised of a franchise arm, company-owned operations, project marketing and a mortgage broking business, Oxygen Home Loans.

"Company-owned sales have led the turnaround of our results. Improved buyer sentiment off the back of recent price growth has improved revenue, which along with cost initiatives and office optimisation, has resulted in a return to profitability via a $4 million earnings before interest, tax, depreciation and amortisation turnaround," Mr Lucas said.

Mr Lucas said a focus on returning the business to earnings growth has seen a reversal in the staff exodus that occured over the past two years when the group was under pressure, with the return of about 32 agents to the fold.

Mr Lucas said given the fragmented character of the real estate agency business, working under a company banner was more efficient than going it alone.

McGrath is also strengthening its project marketing business to take advantage of the forecast improvement in the apartment development business, in which Aqualand is a large participant.

In mid-afternoon trade, McGrath shares had risen 11.5 per cent to 34¢.