Less than two years after announcing their intention to give away a vast fortune together, billionaire philanthropist MacKenzie Scott and her husband, Dan Jewett, a former science teacher, are parting ways.

Scott filed a petition for divorce in the King County Superior Court in Washington state on Monday, according to a copy of the filing. The breakup punctuates an eventful period for Scott, who in less than four years got divorced from her longtime husband, Amazon founder Jeff Bezos, gave away more than $US12 billion ($18.4b) to non-profits and married an instructor at the prestigious school attended by her children. 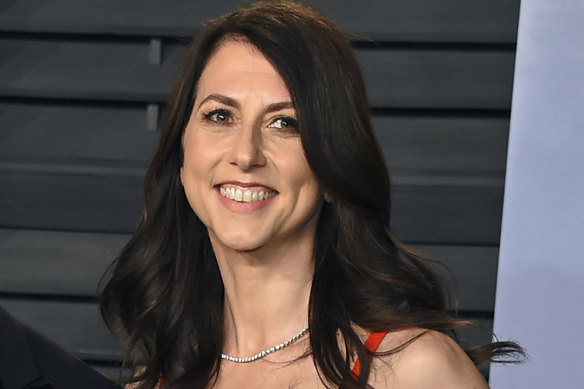 Court records show Jewett did not contest the divorce. The petition says any division of property is laid out in a separation contract, agreed to by the couple, which is not public. Both still live in King County, the filing says, which includes the city of Seattle.

Their marriage, which garnered significant public attention after Scott’s divorce from the world’s richest man, had also been a philanthropic partnership, with Jewett publicly promising to join her in donating their enormous fortune to good causes.

But there were recent signs that the partnership was no more. Previously, grateful non-profits that had received grants from Scott and Jewett thanked them both, but recent recipients thank her alone. 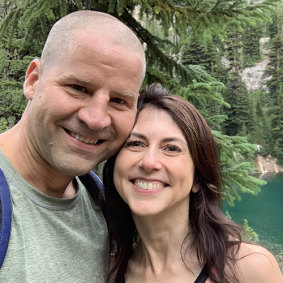 In the past week, his name vanished from her philanthropic endeavours. On the site for the Giving Pledge, where billionaires promise to give away half of their wealth before they die, his letter no longer appeared with hers. Without fanfare, his name was recently edited out of a Medium post Scott had written last year about their gifts.

Scott, a novelist, also deleted Jewett from her author bio on Amazon, the online retailer that is the source of her vast wealth.

Scott rocketed to global attention as she began giving away her wealth at a pace rarely seen in the philanthropic world. After her divorce from Bezos, Scott assembled a team of advisers and began quietly making multimillion-dollar donations to non-profit groups that totalled more than $US12 billion ($18.49b) in just three years.

Scott promised in her May 2019 letter on the Giving Pledge to “keep at it until the safe is empty”. Bloomberg has estimated her net worth as high as $US62 billion ($95.53b), but between her billions of dollars in contributions and the decline in the stock market, the news organisation now gauges her fortune at $US27.8 billion ($42.83b).

In his own Giving Pledge letter two years later, Jewett sounded full of enthusiasm. “I am married to one of the most generous and kind people I know — and joining her in a commitment to pass on an enormous financial wealth to serve others,” he wrote.

Yet he also noted that he had not previously considered making any kind of public statement about his charitable priorities because he had “never sought to gather the kind of wealth required to feel like saying such a thing would have particular meaning.”

As recently as last week, according to the Internet Archive’s Wayback Machine, which preserves old versions of webpages, his letter was still twinned with hers on the site, accompanied by a photo of the two of them looking as if they were out for a hike together. Today there is just a headshot of Scott, along with her letter.

Scott has refused to speak publicly about her giving, declining repeated interview requests from news organisations including The New York Times. Her lawyer did not respond to requests for comment on Wednesday. Attempts to reach Jewett through friends, family and former colleagues and at an address associated with him in Seattle were unsuccessful. His lawyer declined, through a legal assistant, to comment on the divorce.

Scott made her charitable announcements in long posts on Medium that listed the names of organisations that received billions of dollars cumulatively.

Last month, Scott gave two homes in Beverly Hills, California, valued at a combined $US55 million ($84.74b), to the California Community Foundation. The foundation’s affordable housing grant-making functions will receive 90 per cent of the value of the properties. Jewett’s name, which had been in recent gift announcements, was nowhere in the news release.

Jewett taught at the Lakeside School, the prestigious Seattle private school attended by the Bezos children, where he was popular among students and fellow teachers alike.

“He’s earnest, not very edgy,” said Angela Loihl, who met Jewett through a mutual friend. Loihl, who spent weeks in 2014 with Jewett driving in a small-motored car from London to Ulaanbaatar, Mongolia, recalled how that mutual friend had told her years later, after he married Scott, “He’s the perfect person to end up with this money to give away — no sense of greed at all.”

According to the divorce filing, the couple married in California in 2021. The news of their marriage took even Jewett’s friends and colleagues by surprise — producing a whirlwind of news coverage far beyond his expectations, as reporters even appeared on the Lakeside campus. Although he finished the term there, Jewett felt his presence on campus was a distraction.

His new wife had become arguably the most influential philanthropist in the world with an approach that emphasised huge grants — often the largest single gift a group had received — with no strings attached.

In his Giving Pledge letter published in March 2021, Jewett wrote that he was “grateful for the exceptional privilege it will be to partner in giving away assets with the potential to do so much good when shared.”

In June 2021, Scott posted about her giving on Medium, where she wrote: “Me, Dan, a constellation of researchers and administrators and advisers — we are all attempting to give away a fortune that was enabled by systems in need of change.” Sometime in the past week, searches on the Internet Archive showed, the post was edited, and Jewett’s name was removed from there as well.