The four remaining refineries in Australia have been under mounting pressure since government restrictions to halt the spreading pandemic caused borders to shut, airlines to slash flights and people to stay at home – reducing some forecasts for jet fuel demand by as much as 90 per cent. 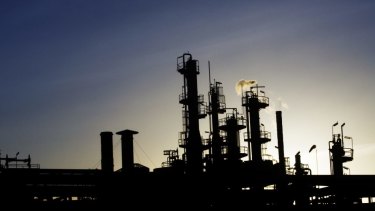 ExxonMobil’s refinery in Altona provides around half of Victoria’s refined fuel needs.Credit:Jessica Shapiro

As refiners worldwide reduce runs to produce as little fuel as possible without shutting down, the operator of Melbourne's Altona refinery, ExxonMobil, told The Age and The Sydney Morning Herald it was implementing measures to manage the "supply and demand balance" including cutting overall production volumes.

"We are actively managing an oversupply of product due to a significant decrease in global demand, particularly jet fuel," an Exxon spokesman said. "Our team is working hard to ensure the refinery continues to meet fuel supply needs and safely operates for as long as possible."

British oil major BP also said it was adjusting output at its Kwinana refinery in Western Australia in response to demand changes.

Due to restrictions on people and movement aimed at minimising a virus outbreak, the company has informed its workers and contractors it would have to put on hold a major maintenance upgrade of the plant that had been scheduled to start in 2021. A spokesman said the decision had "not been made lightly".

The nation's ASX-listed refiners, Caltex and Viva Energy, both notified the market last week of ways they were responding to the worsening pressure of refining margins collapsing along with fuel demand.

Caltex –whose margins have been cut in half from $US8.67 a barrel in March 2019 to $US4.62 last month – will temporarily shutter its Brisbane refinery from next month for an extended maintenance closure and only reopen it once refining margin conditions have improved.

Viva said it would review whether to proceed with plans for a $100 million maintenance program needed to prolong the life of its Geelong refinery in Victoria.

Australia has become increasingly reliant on imported fuel over the past decade, with three of the nation's seven domestic refineries closing down and domestic production of liquid fuels declining sharply.

The pressure threatening the country's four remaining refineries and the potential for disruption to international ports and shipping activity from coronavirus restrictions have prompted calls from federal Labor and the motorists' peak body for the government to consider measures to secure local refining capacity.

Federal Energy Minister Angus Taylor has been working closely with refinery operators in order to better "understand their current challenges" and protect Australia's fuel security in the pandemic. But he has assured the public there was no immediate threat to supply.

Following a G20 meeting last week where Mr Taylor and other energy leaders discussed how to keep the market stable given reduced demand for oil, Australia has since been invited to participate in a special G20 group appointed to help ensure a stable and sustainable energy market throughout the crisis.

"Affordable energy and an uninterrupted supply is crucial to ensure essential services such as health and food supplies," Mr Taylor said. "A stable and secure market will also help nations as they emerge from the economic impacts of the COVID-19 pandemic."

Australia imports about 90 per cent of its fuel. A government report last year found while the four local refineries were "expected to remain viable in the foreseeable future", their continued viability depended on the "investment strategy of individual companies".

The federal government has convened weekly meetings between industry representatives and government officials to ensure the nation was well-placed to address any potential issues.

BP said it was regularly engaging with the federal government on the company' responses to the pandemic and its work to maintain a "reliable and efficient fuel supply chain".