Kogan chief executive and co-founder Ruslan Kogan has warned the coronavirus could have a "huge impact" on consumer goods, though says it's too early to tell if his own business could be hit.

The online retailer and assorted services provider released its half-year results on Tuesday, telling shareholders the company's gross sales were up 16.4 per cent to $322.9 million. 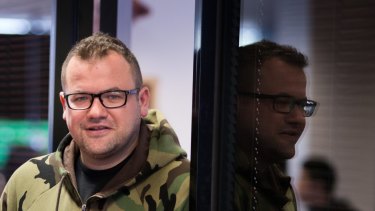 Kogan founder Ruslan Kogan says it’s too early to predict an impact from the coronavirus.Credit:Simon Schluter

Net profit after tax grew 20.8 per cent on the prior corresponding half, coming in at $8.9 million.

Kogan, which sources a significant number of products from China including through its private label 'Exclusives' segment, is highly exposed to potential disruptions from the coronavirus, which has seen a number of manufacturing delays due to Chinese factory workers being told to stay home.

Mr Kogan told The Age and The Sydney Morning Herald the current impacts from the COVID-19 virus were currently too hard to predict at this stage, saying the company was "monitoring" the situation.

"China is a global manufacturing hub, so no matter what product in any industry or category you're after, chances are the product itself or the components are manufactured in China," he said.

"It's something that could potentially have a huge impact on any product out there."

Word from suppliers was patchy, he said, with some already returning to work but others' factories still closed due to the virus. Sustained closures or delays could see damage done to the company's second-half results, he warned.

Analysts had been concerned the company's Exclusives segment, which accounts for nearly 50 per cent of the company's gross profit, had slowed, with margins dropping 4 per cent to 23.6 for the half.

This decline was somewhat mitigated by ripping growth in the businesses new Marketplace division, which allows businesses to sell on Kogan's platform similar to eBay or Amazon.

Marketplace gross sales grew 44.6 per cent between the first and second quarters, with total gross sales of $57 million, with Kogan noting there was a "long backlog" of new sellers still hoping to get on board.

The companies assorted other verticals – which include Kogan Internet, Mobile, Credit Cards, Pet Insurance, Energy, Cars, and Travel – were a mixed bag. Mobile profits declined 10.6 per cent on the prior corresponding half, though active customers grew 5.1 per cent.

Internet customer grew 344 per cent, and Kogan's Advertising business reported a 120 per cent increase in revenue to $2.6 million.

RBC Capital Markets analyst Tim Piper said the result was largely in line with expectations but noted the company's operating expenditure was slightly better than predicted, increasing just 0.5 per cent for the half.

"We remain slightly cautious around the second half given the material gross profit contribution of the Exclusives channel, while there appears to be substantial price discounting in several key product categories that may weigh on margins," he said.

Shares rose slightly after market open but quickly reversed, dropping 5.9 per cent to $4.93.

While Kogan did not provide any outlook for the new year, it said gross sales for January were up 17 per cent.