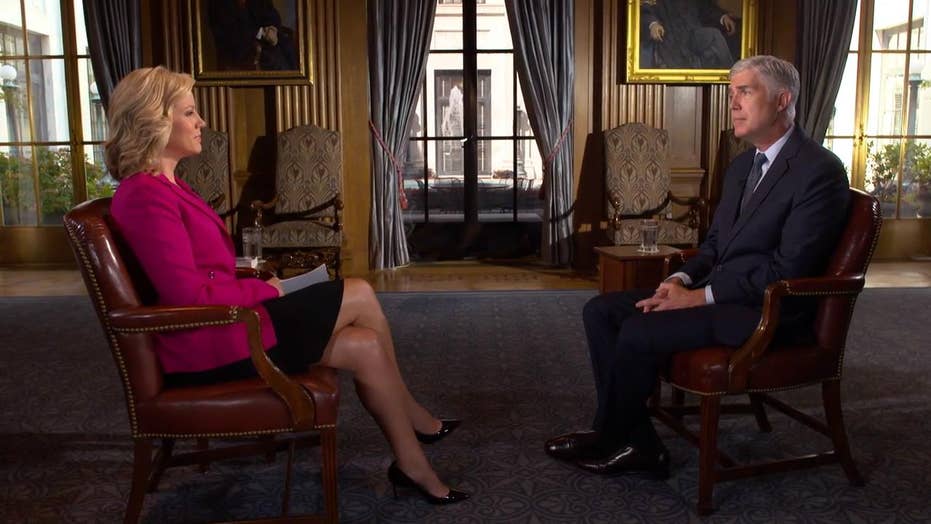 Justice Neil Gorsuch on his concern for America’s future: ‘Republics have a checkered history’

In an exclusive Fox Nation interview, Supreme Court Justice Neil Gorsuch revealed his deep concerns for the future of America, which drove him to write his new book, "A Republic, if you can keep it."

The book's title is inspired by a famous phrase attributed to Founding Father Benjamin Franklin.  As Franklin left the Constitutional Convention of 1787, after the drafting of the U.S. Constitution, he was reportedly asked what form of government had been created.  Franklin answered, "A Republic, if you can keep it", suggesting that the country's fate lay in the hands of its citizenry.

Justice Gorsuch told Fox News anchor Shannon Bream in his first televised interview as a Supreme Court Justice that an uninformed public is a danger to the country. "Republics have a checkered history in our history books, and we need to make sure that the people know how to run their own government."

Gorsuch said, "I am concerned on the civics front when I read that about a third of Americans can't name the three branches of government.  60% apparently would fail the American naturalization examination — that worries me."

Justice Gorsuch also believes that an understanding of America's past is central to the nation's future success, and he credits the musical "Hamilton" for educating America's youngest generations.

Gorsuch explained, "You’ve seen a secretary of Treasury and a vice president of the United States have a duel.  That’s part of our history.  It’s always been a ruckus republic.  We used to have Senators cane one another on the floor. I’m glad we don’t have that anymore, at least, but it is a ruckus republic. That is what makes us strong. We can appreciate and embrace different ideas and open ourselves to one another and remember that that person with whom we disagree is coming at it from the same angle, the same hope of making a more perfect union."

"I think democracy is a really hard business and that’s because its strength comes from disagreements and the ability to air — comfortably and confidently — your point of view.  Share it with others and have it heard and pick the best at the end of the day.  That’s the idea of democracy.  But for it to work, we have to listen as well as speak.  We have to tolerate as well as expect tolerance for our point of view," added Gorsuch.

To watch an extended director’s cut of "Neil Gorsuch: Justice For The Republic"  join Fox Nation.

Fox Nation programs are viewable on-demand and from your mobile device app, but only available only for Fox Nation subscribers. Go to Fox Nation to start a free trial and watch the extensive library from Tomi Lahren, Pete Hegseth, Abby Hornacek, Laura Ingraham, Greg Gutfeld, Judge Andrew Napolitano and many more of your favorite Fox News personalities.