Home » Josh Hawley Says He Doesn’t Know If He Saluted Any Rioters, So We Checked

On Jan. 6, Sen. Josh Hawley (R-Mo.) walked outside the U.S. Capitol, turned to a crowd of protesters and infamously saluted them with a raised fist before going inside to try to throw out November’s election results.

About an hour later, some of those protesters broke through police barricades and stormed up the steps of the Capitol, where the mob smashed on the door until they gained entry to the building and a melee with law enforcement awaited.

Hawley insisted earlier this week that he was saluting peaceful protesters and has maintained that he did nothing to encourage the violence that day.

“I don’t know which of those protesters, if any of them, those demonstrators, participated in the criminal riot,” Hawley said Tuesday during a live event with The Washington Post, calling it a “slur” to say they were all rioters.

But it’s ridiculous for Hawley to suggest he waved to a peaceful crowd and that he couldn’t possibly know if any of those people were part of the insurrection after he went inside. Photos and videos from that day show that many people on the east side of the Capitol were eager participants in the day’s events. HuffPost, working with members of the Sedition Hunters community and the group Capitol Terrorists Exposers, endeavored to help Hawley resolve the question of whether he’d saluted rioters on Jan. 6. The conclusion? He did.

Hawley waved to the crowd from across the Capitol plaza shortly before 1 p.m. At a distance of about 200 feet, it would have been tough for him to see all the people very clearly.

Hawley couldn’t have seen the contingent of Proud Boys, including the now-incarcerated Joseph Biggs and Ethan Nordean, that briefly visited the east side of the Capitol, according to a video taken that day. But he could have known they were in Washington and that there had already been violence and arrests. Members of Congress had been warned to use the Capitol’s underground tunnels to reach the House chamber.

Videos from the east side of the Capitol that day also show Keith Lee, who later infiltrated the Rotunda, talking about how the barricades wouldn’t be strong enough to hold people back and telling a crowd he would “risk life, limb and injury.” Another part of the video shows a man screaming “storm the Capitol” into a bullhorn. During a livestream interview (that was deleted but viewed by HuffPost), Ann Vandersteel, a podcaster, reported that “a lot of people are talking about storming the Capitol if [the Electoral College vote certification] isn’t done the right way.”

Most of the fighting and violence happened on the west side of the Capitol, but protesters on the east side, where Hawley raised his fist, also fought police. Roughly an hour after Hawley’s appearance, at the same location, violent rioters pushed past the barricades and a massive crowd flooded toward the building’s center steps, as seen in the video below. Few stayed behind.

Many stormed right up to the doors of the building, overwhelming the police who tried to stop them. Why wouldn’t they? They believed that the election was stolen and that Joe Biden was about to usurp the American presidency. Mass delusional belief in Trump’s voter fraud conspiracy theories, as some law enforcement officials warned HuffPost just days after Biden’s victory, invited violence.

So what did Hawley see? He said Tuesday that when he stood there an hour before the riot exploded, he saw “demonstrators who were out there on the far end of the plaza on the east side standing behind barricades waving American flags,” adding that they had every right to be there.

The photographer who captured the senator’s raised fist also took a few pictures of the crowd arrayed along the barricades on the east side of the Capitol. 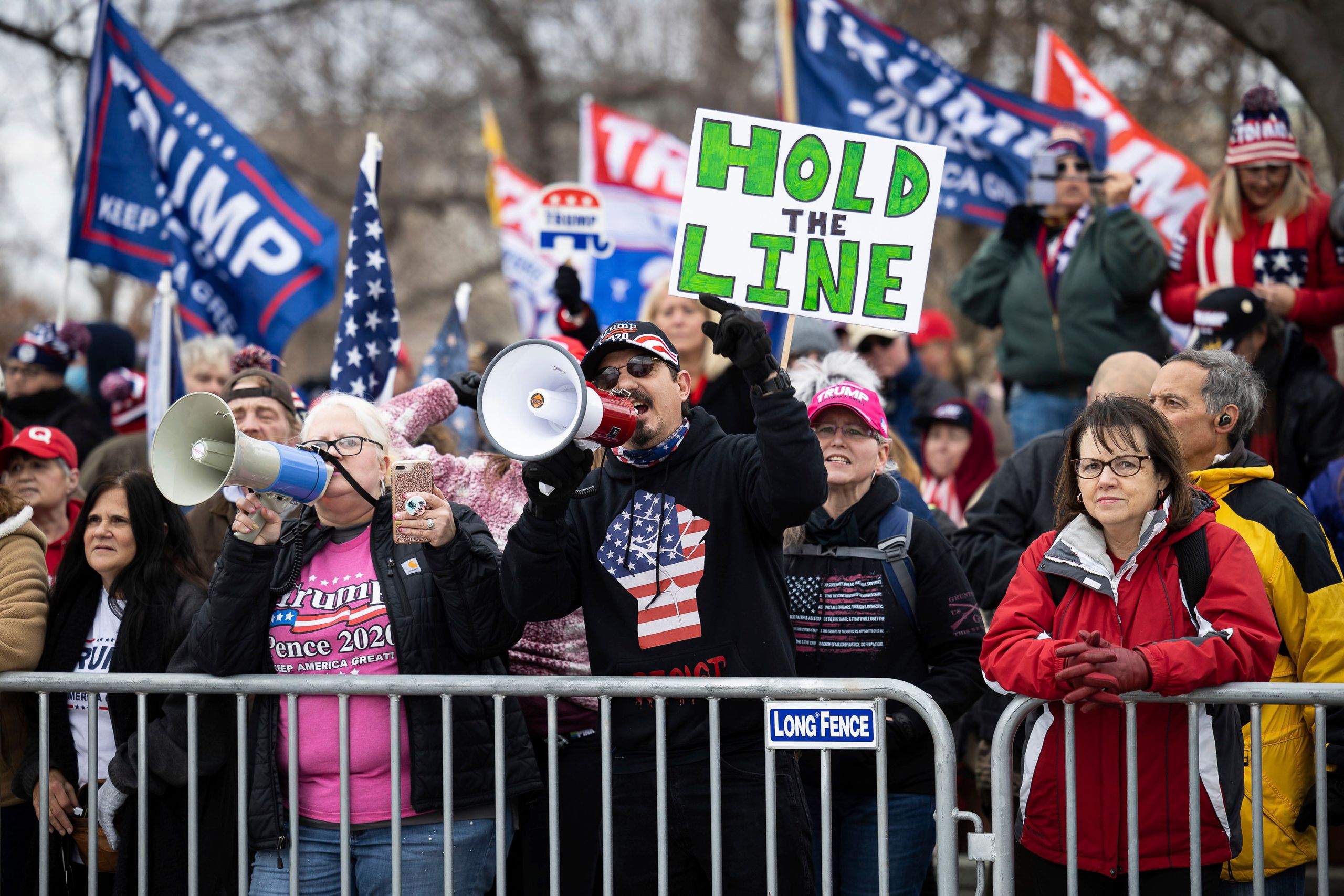 The photo shows a man in a black hoodie yelling into a bullhorn and a woman in a red jacket resting her arms on the barricade. The picture was taken shortly before Hawley arrived on the plaza. All cool and legal.

But here’s the man in the hoodie in another photo, taken roughly an hour later, in roughly the same location, right after the crowd fought police to get past the barricades. 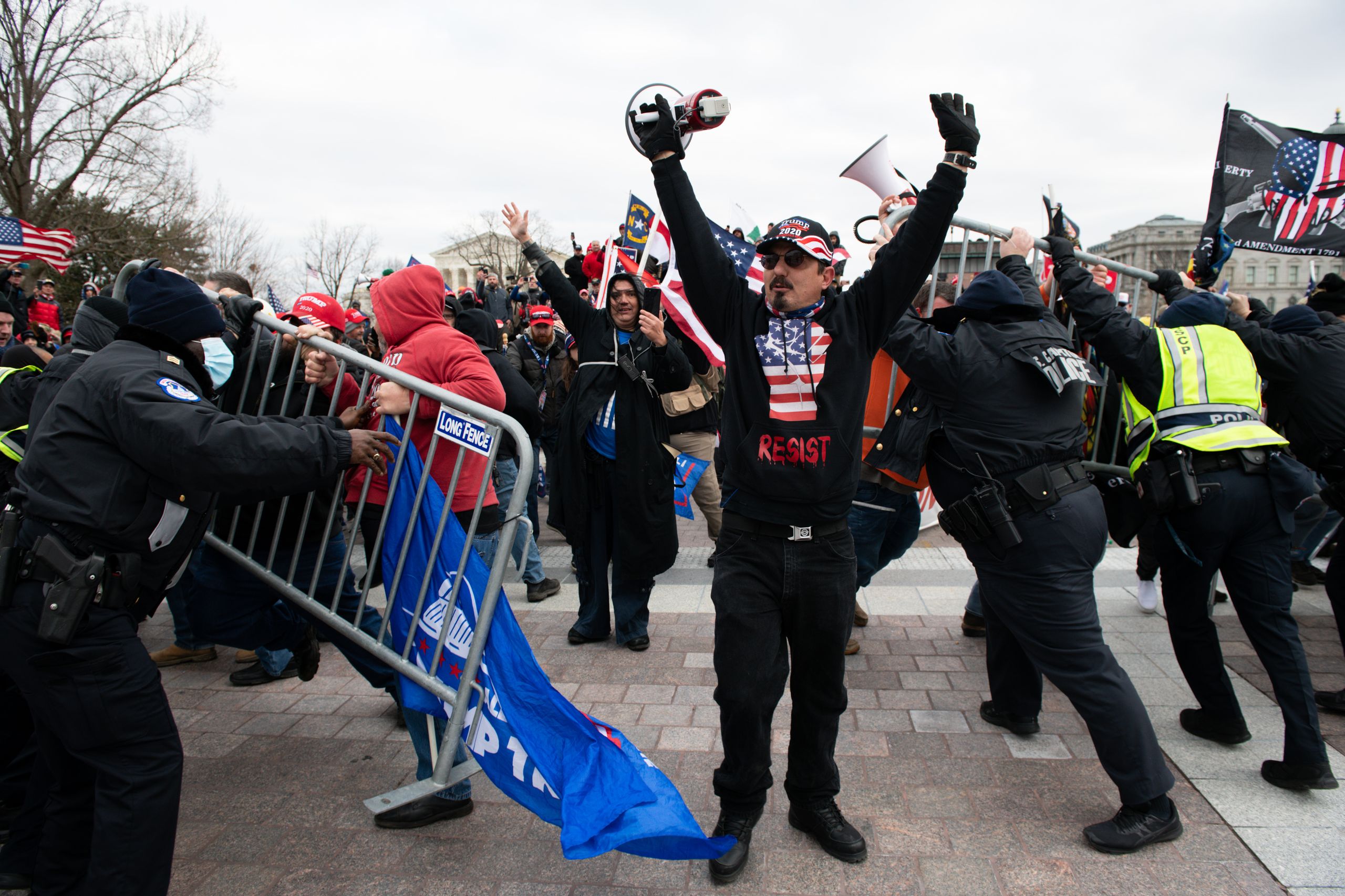 And the woman in red pops up in pictures and videos of the mob on the steps. (Look at the bottom left corner of this video.)

This week, during an event promoting his book, Hawley said the people protesting Trump’s election loss were overwhelmingly peaceful.

“All last summer we heard over and over it’s important to distinguish between the peaceful protesters at the BLM protests and the rioters,” he said. “I agreed with that then. I said that then. I think the same is true of those on January 6.”

Set aside what Hawley actually said last summer about Black Lives Matter protests: “Let’s just be clear. These are not peaceful protests that we are seeing across the country. They are violent and increasingly violent riots and attacks and looting.” In the research tabulating whether protests were peaceful or not, any reports of injuries or arrests meant an event didn’t count as peaceful. The vast majority did; the Capitol riot didn’t.

Pro-Trump protesters had the right to demonstrate outside of the barriers that surrounded the Capitol complex ― but not to blow past those security barriers and enter restricted grounds, overwhelm law enforcement and break into the building. Under normal circumstances, it would’ve earned them a pair of flex cuffs courtesy of the U.S. Capitol Police.

When the pro-Trump mob stormed past the police line on the western front of the Capitol, they knocked a female Capitol Police officer unconscious. One Trump fan charged in her assault at a barricade told undercover FBI agents it was “fucking fun.” Then the mob brawled with police and used chemical weapons against Capitol Police officers, one of whom died the next day. 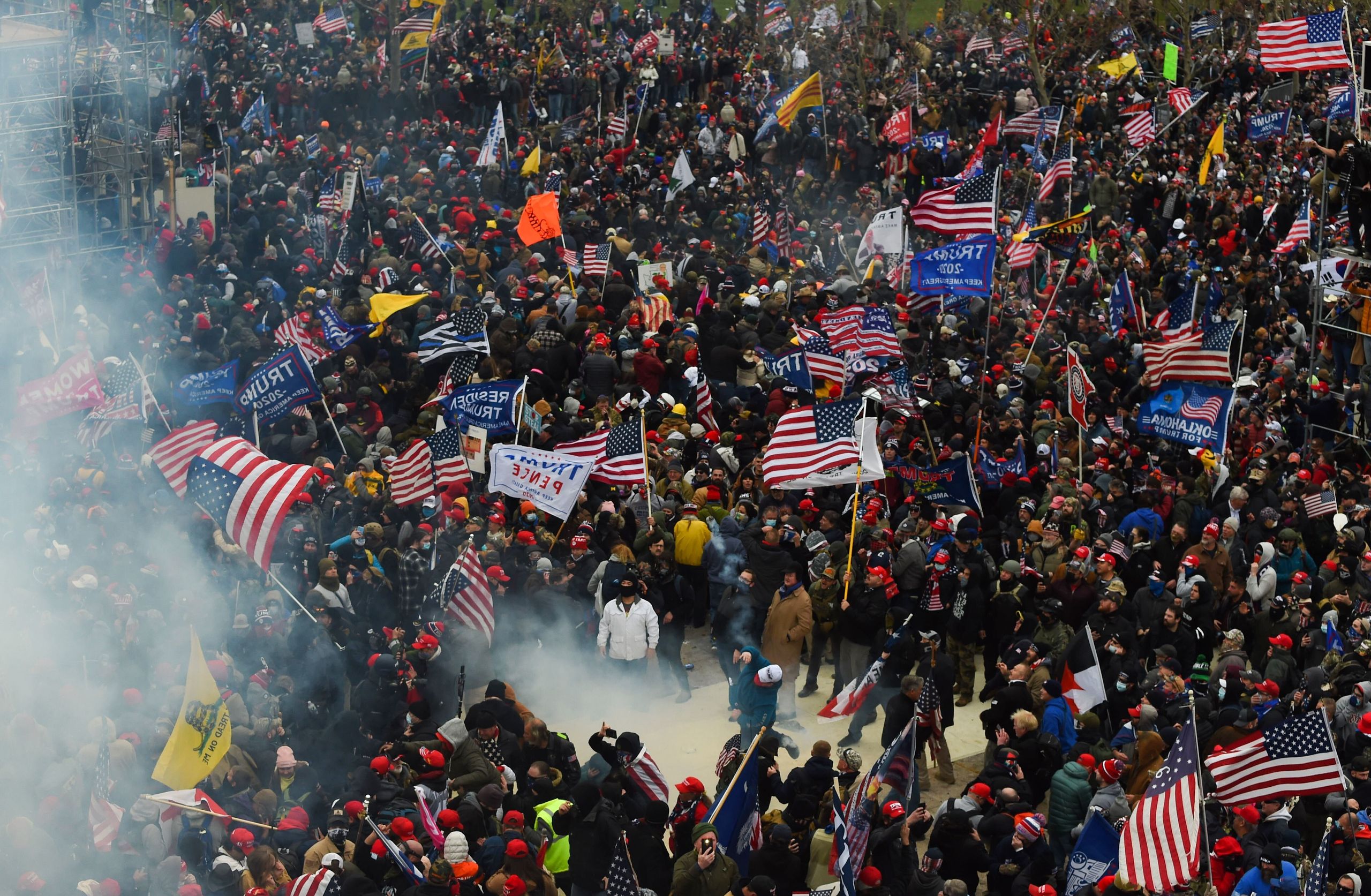 The violent rioters at the front of the mob used the size of the crowd to their advantage, telling cops there was nothing they could do to stop them. Eventually, the Capitol attackers, once again backed by a mob of thousands, fought their way to a Capitol entrance and engaged in a lengthy, violent battle. Several officers were dragged into the crowd and beaten by Trump supporters who thought they were fighting for America.

When Trump fanatic Danny “D.J.” Rodriguez, wearing a “Make America Great Again” hat, electroshocked D.C. Police Officer Mike Fanone, there were thousands of Trump supporters behind him. Some of them may not have realized how brutal things were up front, but even their unlawful presence on Capitol grounds made it impossible for police to gain control over the situation. As the violent mob closed around Fanone, one Capitol defendant (who was captured on video throwing a water bottle at the officer as he was dragged farther and farther into the angry mob) said he saw “death” in the officer’s eyes.

The defendant later claimed to the FBI that he regretted not helping Fanone. Some of the other members of the mob did eventually come to Fanone’s aid. He survived. But by joining the mob that was storming the Capitol, the illegal protesters had contributed to a situation that left Fanone fighting for his life.

Fanone has become one of the most recognizable victims of the pro-Trump mob, and he recently called out politicians who (like Hawley) have attempted to “whitewash” and “downplay” what happened on Jan. 6.

“The indifference shown to my colleagues and I is disgraceful,” Fanone said in a letter to members of Congress this week.