Hundreds of airport workers have walked off the job in a 24-hour strike against budget airline Jetstar, amid a bitter standoff over pay and working conditions.

Jetstar cancelled about a quarter of its domestic flights scheduled for Wednesday in preparation for the planned strike by ground crew and baggage handlers. 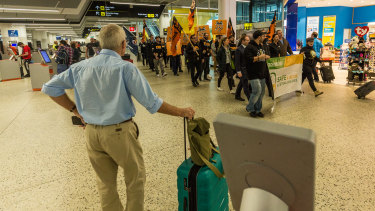 Australian Council of Trade Unions secretary Sally McManus told workers gathered at Tullamarine in Melbourne the strike was a fight about job security.

“Job security is at the heart of the problem we've got in our labor market at the moment,” she said.

“It's part of the reason why we've got record low wage growth is because working people can't get jobs I can count on. 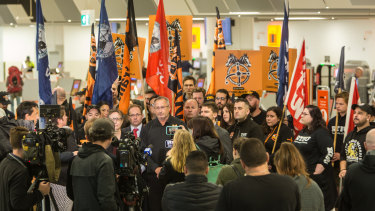 The Jetstar strike at Melbourne Airport on Wednesday morning.Credit:Scott McNaughton

The Transport Workers' Union told the airline on Friday that about 250 of its members would walk off the job at Sydney, Melbourne, Avalon, Brisbane, Cairns and Adelaide airports, starting Wednesday morning.

Jetstar on Monday confirmed it had cancelled 48 domestic flights – out of about 200 it operates daily – to "minimise the impact" of the stop-work action.

Other flights have been consolidated and some passengers have been moved onto flights operated by its parent airline Qantas.

A Jetstar spokeswoman said all passengers booked to travel on Wednesday would arrive at their destination on the same day and that most passengers on affected flights would travel "within a few hours" of their original departure time. International flights have not been affected.

"We contacted affected customers over the weekend to advise them of their new flight details and we thank them for their flexibility," the spokeswoman said. 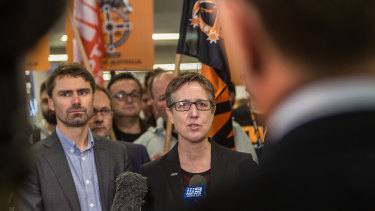 Passengers booked to travel on Wednesday have been able to cancel their flight for a full refund or move their booking forward to an earlier date at no extra cost.

Wednesday's strike is an escalation of industrial action by the Transport Workers' Union, after it held two-hour work stoppages in December, which caused 28 flight cancellations.

The TWU and Jetstar are at loggerheads over a new wage agreement.

The union says its members face irregular working hours and a key sticking point has been its demand for a guaranteed minimum of 30 hours of work each week.

Jetstar has said it has made an offer that included a 3 per cent pay rise, with a year's backpay, as well as roster benefits.

TWU national president John Berger said Jetstar needed to get back to negotiations and not just “throw” an agreement at workers and expect them to take it.

He called an offer of $2000 in backpay an “absolute disgrace”.

“We’ve seen the airline quite profitable over the last number of years and that can only be for one reason and that’s at the expense of its working people and our members.”