The two businesses told investors on Wednesday morning that Mr Murray would replace Premier’s former chief executive Mark McInnes at the end of August. The JB Hi-Fi boss will be replaced by the current head of The Good Guys, Terry Smart. 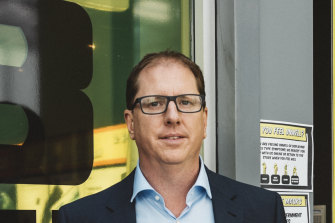 “The decision to leave [JB Hi-Fi] was a very difficult one to make. After 18 years with the company it is time for me to take on a new challenge,” Mr Murray said. “I am proud to leave the business in such a strong position and the group will continue to go from strength to strength under Terry’s leadership.”

This leadership reshuffle will see Premier claim one of Australia’s most successful retail chief executives, with Mr Murray overseeing significant sales and profit growth at JB during his seven-year tenure at the helm.

Mr Lew said Mr Murray was “unquestionably” one of the best retailers in Australia and would be a significant boon to the Smiggle and Peter Alexander owner.

“This is the beginning of a new chapter for Premier as the group continues to grow its brands both locally and globally while carefully managing through continued pandemic conditions across numerous jurisdictions.”

Mr Murray joined JB Hi-Fi in 2003 and became chief executive officer in 2014. His successor, Mr Smart, was formerly the chief executive of JB Hi-Fi from 2010 to 2014, after which he left to spend more time with his family. He later returned to the company in 2017 to head up the newly acquired Good Guys business.

“In JB Hi-Fi and The Good Guys we have two of Australia’s most loved, respected and successful retail brands,” Mr Smart said.

“Both businesses continue to be well positioned to maximise the opportunities ahead of them and I look forward to working with the two best retail management teams in the business.”

JB Hi-Fi has been a major beneficiary of the coronavirus pandemic as shoppers have spent big on home office goods and general electronics. The company also released a third-quarter trading update on Wednesday, showing sales have continued to boom into the new year.