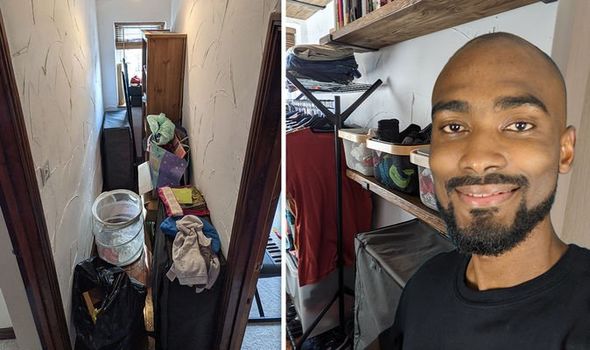 Dad-of-two Kenroy Malcolm from Bromsgrove told money-saving community LatestDeals.co.uk that he was quoted an eye-watering £470 for a walk-in wardrobe but managed to create it himself for just £120. Kenroy, who is a teaching assistant and YouTuber, said he wanted to do the job himself rather than pay for someone to come in and do it for him. The 33-year-old’s home has a small area between two bedrooms that the family wanted to use for storage.

However, they were unsure of how to make the best use of the area.

Kenroy said he ideally wanted to knock down one of the walls to make it into a traditional walk-in closet but he didn’t want to do that right away so needed a plan B.

While browsing online, the father-of-two found a sliding door on Argos that he knew would be a great space-saving option.

He said: “I stumbled upon a sliding door on Argos which would save us space compared with a traditional door.

“I knew this was the best option as we could avoid swinging a door open and closed, instead just sliding one over to access the space.”

Installing a sliding door can be tricky and can be expensive if you use a professional.

Kenroy said he asked a friend who is in the trade how much a joiner would charge.

They estimated that a joiner would charge approximately £170 per day for labour and materials would cost around £300.

Kenroy added: “This means I would be paying roughly £470.

“I knew I could make this space a walk-in wardrobe with a difference without paying for a professional job.

“Saving money to provide a better life for my family was the main inspiration for me doing this project.”

The father of two girls, aged six and one, used scaffolding boards from a previous project to make shelves above the naked wardrobe he bought for just £55 from Wayfair.

In terms of his other supplies, Kenroy bought the folding door from Argos for £32, however, this wasn’t the cheapest option.

He continued: “There is also a cheaper version for £22 for those on a tighter budget but I decided to splash out on this one!

“I got some shelf brackets from eBay and they were £22 for four.

“I got free recycled wood to make the door frame.

“I was really impressed with this particular piece of wood as I actually salvaged it from my neighbour.

“He was doing some renovation on his loft and he was throwing these pieces of old timber away which I think were a part of his rafters in his attic.

“Rather than chucking it away, I wanted to make use of this solid piece of wood in my project. I also picked up some timber from my local hardware store for no more than £10.”

Kenroy also made some impressive savings on his project by using a site called Top Cashback.

Between February and May, he managed to generate over £100 in cashback.

Before he started the project, Kenroy needed to clear the space.

He removed the staples from the salvaged wood and cut it down to the right size.

He said: “The wood was in pretty rough condition, but I sanded it down and once that was done it meant I wouldn’t need to varnish or paint it.

“What’s more, the rustic look of the wood is in line with the style we have throughout the rest of the property, so it was a perfect match.”

Next, it was time to install the sliding door.

Luckily, Kenroy found the door to be “pretty straightforward” to set up.

However, he warned that the door does come in a specific size which means you can’t do much to alter them but the one he bought was the exact size he needed.

He added: “It was a few centimetres short, which is why I used the timber to cover what would have been left behind.”

Kenroy set up the naked wardrobe before attaching his homemade shelves with the help of his brother.

The father-of-two said he’s “super happy” with the project.

He said: “I was quite busy at the time so it took me a few days to complete, but I reckon if I’d set aside one full day I could have had it all done and dusted in that timeframe.

“I’m glad I was able to come up with a cost-effective solution to make the best use of this small space in the house.”

Check out more from LatestDeals.co.uk