Home » World News » ‘Independence from this virus’: President Biden shifts from ‘darkest days’ to hope on the horizon

WASHINGTON — After months of warning the “darkest days” in the battle against COVID-19 “are ahead of us, not behind us,” President Joe Biden struck a more optimistic tone Thursday as he offered a glimmer of hope that Americans may see some semblance of normalcy by Independence Day.

Making his first primetime address as president, Biden mourned a “collective suffering, a collective sacrifice” over the last year but pivoted to a more hopeful future by announcing he directed states to make all American adults eligible to receive COVID-19 vaccines no later than May 1. He also vowed that if Americans “do our part” in the coming weeks, friends and families will be able to join together in small groups in time for Fourth of July celebrations.

The president’s 24-minute speech delivered from the East Room at the White House marked a departure from his mostly sober messaging on the COVID-19 crisis, which has claimed nearly 530,000 Americans in the year since the World Health Organization declared it a pandemic. While still imploring Americans to wear masks, get vaccinated and wash their hands, Biden for the first time looked ahead to the start of a post-pandemic society.

“Over a year ago, no one could have imagined what we were about to go through,” Biden said, “but now we’re coming through it.” 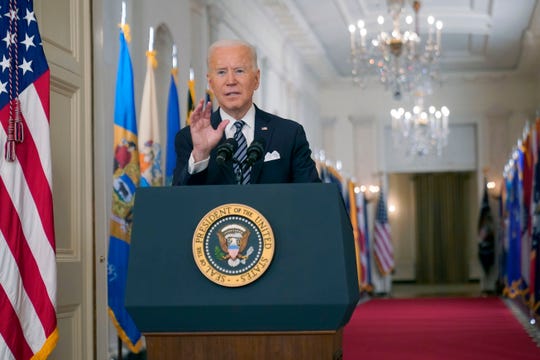 President Joe Biden speaks about the COVID-19 pandemic during a prime-time address from the East Room of the White House, Thursday, March 11, 2021, in Washington. (Photo: Andrew Harnik, AP)

‘Reestablishing the government as not being the enemy’

For weeks, the White House had given mostly vague answers to the most commonly asked question about returning to normalcy. Biden stressed that Fourth of a July is only a “goal” for small gatherings, warning it’s no guarantee if people let down their guard.

“It was what you would call delayed gratification,” said Todd Belt, professor and political management program director at George Washington University. “And every parent knows this. He was playing the parent figure to the nation, that we’re going to get this treat at the end, but we still have to soldier on through to get there.”

“That was the light at the end of the tunnel that he gave us,” Belt said.

Addressing the nation, President Joe Biden reads the most recent number of American deaths from the coronavirus pandemic.

Hours after signing into law his $1.9 trillion COVID-19 relief package, Biden sought to build on that momentum by announcing a new round of efforts to speed the pace of vaccine distribution, assist schools with safely reopening and provide critical financial assistance to struggling families.

“We need to remember the government isn’t some foreign force in the distant capital,” Biden said. “No, it’s us, all of us.”

The president also announced he is deploying an additional 4,000 troops to assist at mass vaccination sites and will expand the pool of professionals who can administer doses to include dentists, veterinarians, medical students and paramedics.

The speech was a “civics lesson” about government working for the greater good, Belt said, calling it “something that needed to be said after the last four years.”

Belt said Biden was “reestablishing the government as not being the enemy but bringing out the cavalry that’s going to be delivering all these vaccines and delivering the checks and getting things running again.”

The latest benchmarks follow a pattern of Biden setting manageable expectations that the White House is able to meet and in some instances over-deliver on. Biden initially pointed to the end of July as when vaccines would be available for all Americans, before moving that timeline up two months to May. During his remarks Thursday, the president said the U.S. is on track to meet his goal of 100 million shots in his first 100 days on his 60th day in office.

His address – 50 days into his presidency – came on the one-year anniversary of nationwide shutdowns at the beginning of the pandemic that shuttered businesses, upended schools, canceled professional sports leagues and altered the way of life for Americans.

A politician known for his empathy, Biden embraced his role as consoler-in-chief as he recounted all the “details of life that matter the most” that had been lost to the pandemic, including family reunions, weddings and graduations. The president also roundly condemned a rise in hate crimes during the pandemic against Asian Americans, who have been “attacked, harassed and scapegoated.”

“They are forced to live in fear for their lives just walking down streets in America. It’s wrong, it’s un-American and it must stop,” he said.

Barbara Perry, director of presidential studies at the University of Virginia’s Miller Center, said Biden’s past tragedies, including the deaths of his first wife and daughter in a car accident and his son to brain cancer, uniquely positioned the president to comfort Americans about the grim anniversary.

“He really genuinely does feel people’s pain because he’s had so much of it in his life,” Perry said. “He seems so comfortable in the role, which, in turn, makes him the perfect comforter-in-chief.

Perry said Biden’s message hit all the right notes and “exhibited the competence of an experienced public official who creates effective policies,” noting that he, like President John F. Kennedy, challenged citizens to act for the good of their country.

Biden’s tone shows difference in approach to tackling the pandemic

The president, unlike his predecessor who downplayed the spread of the virus, pleaded with Americans to stay vigilant about the COVID-19 restrictions and warned that letting up may result in reinstating restrictions.

Biden speech highlights: COVID relief bill 2021 is signed on the anniversary of the pandemic declaration, and the Biden administration looks ahead.

Trump, who delivered a prime-time address a year ago to announce a ban on travel from Europe and allay mounting concerns about the spread of the virus in the U.S., said he would use the “full power of the government” to combat the pandemic. But Trump, who declared himself a “wartime president,” largely relied on states to develop their own COVID-19 response and later described the federal government as playing a “backup” role in the crisis.

Biden’s emphasis on a unified government response, Perry said, stood in stark contrast to his predecessor.

“Trump didn’t pull us together at all and in fact tried to divide the nation on issues like wearing a mask,” Perry said. “Biden is trying to find unity and, at the very least, trying not to divide the country on issues related to COVID. The contrast between these two presidents couldn’t be more vast.”

Biden marked the first half of his 100 days in office with popularity that Trump never enjoyed during his tumultuous four years. A Morning Consult poll taken last week found 59% of Americans approve of Biden’s job performance during his young term while 37% disapprove.

His American Rescue Plan has even greater support, backed by 76% of Americans, according to the poll, and opposed by just 17%. Sixty-eight percent of registered voters approve of his handling of the pandemic.

In the coming days, Biden, Vice President Kamala Harris, first lady Jill Biden and second gentleman Doug Emhoff plan to hit the road to tout the benefits of the plan to the public. Biden has trips planned for Atlanta and Pennsylvania next week. It reflects a lesson that Biden learned from his stint as vice president.

Biden and White House aides who worked under former President Barack Obama – including chief of staff Ron Klain – said they regret not working more aggressively to explain how the passage of Obama’s stimulus plan in 2009 helped ordinary Americans.

“This is a really important part of his strategy to get out there, talk to the people and to really help them connect to what government is doing to improve their lives,” Belt said. “And that’s something Obama never did.”