Home » World News » I went to the first Amazon Fresh store in the UK and felt like a shoplifter. Take a look inside.

The Amazon Fresh store in the borough of Ealing, West London, is no ordinary supermarket.

Retail giant Amazon opened its first physical store in the UK on March 4 so I decided to go along to see what all the fuss was about.

It operates in the same way as the cashierless 20 Amazon Go stores in the US — you go in, put the items in your bag, and wander back out.

I felt like the world’s biggest shoplifter, even when carrying Amazon’s green bag with “Just Walk Out” slapped on the side.

The whole shopping experience was hassle-free. There’s no dodging trolleys, speed-packing at the till or faffing with credit cards. You get billed after you exit the shop, although my receipt took two hours to come through so I didn’t know exactly how much I’d spent until then.

The location is only 2,500 square feet so it’s much smaller than a supermarket and it would be a struggle to do a weekly shop in there.

Overall, I was impressed at the organisation, cleanliness and efficiency of the store. What I didn’t like was the hundreds of cameras hanging from the ceiling, checking what was going into my bag. It had a dystopian feel.

The food wasn’t anything special, but what makes this store pop is its futuristic technology that means an effortless shopping trip.

Here’s what happened during my shopping trip to London’s new Amazon Fresh and what I bought: 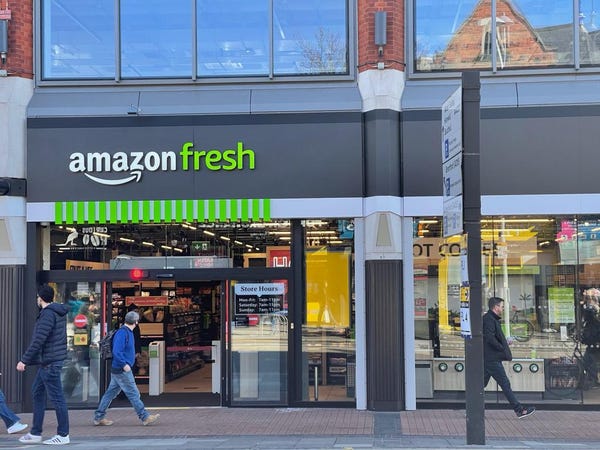 My first thought when approaching Amazon Fresh was: why Ealing?

It takes over an hour on the tube to get from central London to Ealing. But the high street is home to some popular household names — the newest being Amazon Fresh.

The doors in the photo above are the exit to the store. The entrance is around the corner where I joined a line, downloaded the Amazon app and got directed by assistants in green jackets.

I visited around 14:00 p.m., just after the lunchtime rush, so the queue wasn’t very long. Considering the store has no tills, it noticeably cut down the waiting time.

As soon as you scan the QR code on the Amazon app, you’re timed. The receipt showed I was inside the store for a total of 17 minutes and 12 seconds.

To get into the store, you have to scan the QR code on the Amazon app which opens the green barrier. 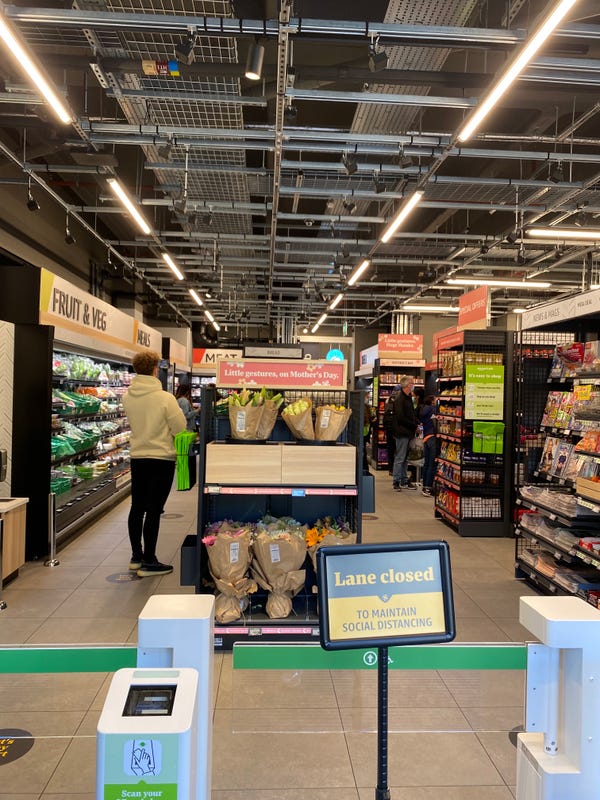 Amazon Fresh didn’t fail to give a good first impression. As long as you have the Amazon App downloaded, it’s a simple scan of the QR code and you’re in.

Customers can take their own bags or pick up the medium-sized, reusable Amazon Fresh bags for £1 ($1.40). There are no trolleys or baskets, which made the whole experience much smoother.

But as an pedantic trolley-stacker, shoving things into a bag and not visually having my food in front of me to organise proved a little difficult.

If you look up, you'll see loads of cameras pointing at the shelves. They track every item that goes into your bag. 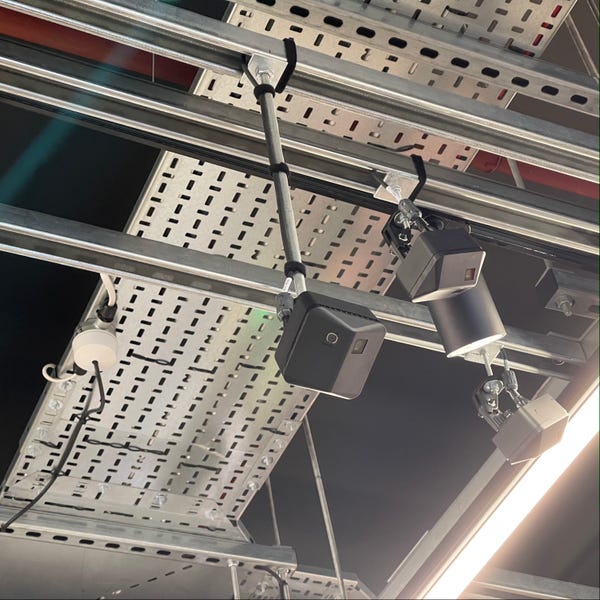 The main visual difference between Amazon Fresh and other supermarkets were the hundreds of cameras dangling from the ceiling. I felt like I was being watched, even though the cameras were just monitoring what was going into my bag.

On the flip side, it felt safe and secure. If the tech remains reliable, then shoplifting shouldn’t be a concern, as customers are tracked as soon as they enter the store via their Amazon account.

The cameras work in conjunction with weight sensors on the shelves to determine which items you've picked up. 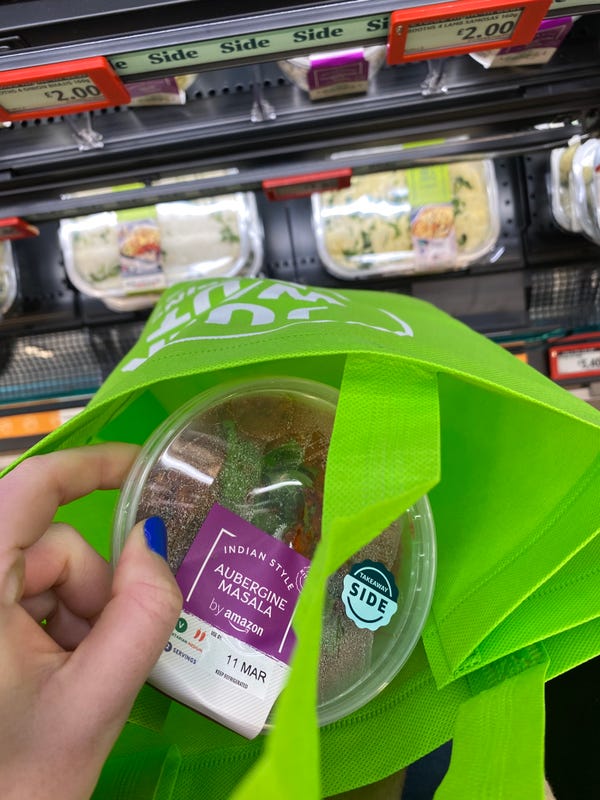 Halfway around the store, I realised I was putting items into the bag in a very exaggerated manner to prove I was set on buying the product and had nothing to hide.

The aubergine masala was part of a takeaway deal of two mains and two sides for £10 ($14).

You can't hand items to other people to put in their basket. You have to pick them up yourself. 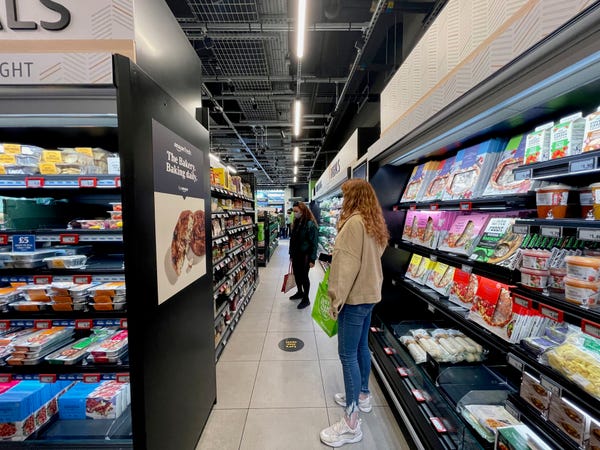 It’s a solo shopping experience. If you pick up an item and pass it to another customer, the weight sensors and cameras will think you put the product in your bag so you’ll be charged.

Amazon Fresh sells a range of its own branded food, including pizzas, ready meals and fresh fruit and vegetables at competitive prices. 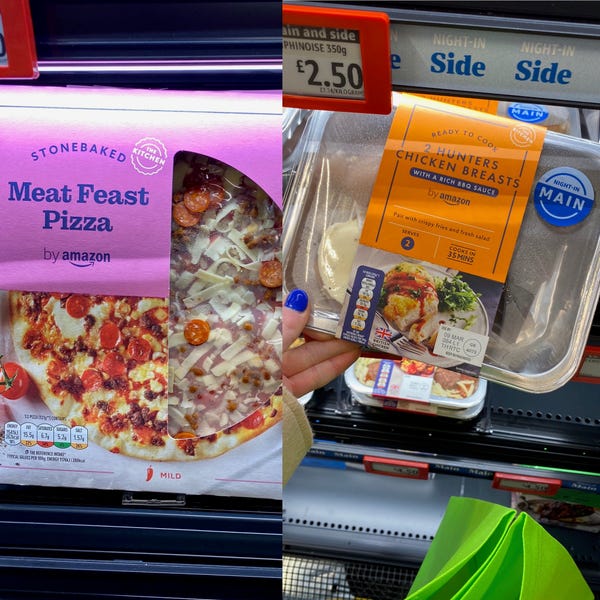 The retail giant sources its food from British suppliers. Unexpectedly, around one third of the store was taken up by Amazon’s own branded products. And it all looks great!

Prices are average but competitive. It’s £4 ($5.60) for a medium-sized pizza, similar to other UK supermarkets such as Tescos and Sainsbury’s. But Amazon Fresh offered good deals. For the two chicken breasts in the photo above and a side, it’s £5 ($7).

The store also had free-from, organic and vegan ranges, as well as lots of popular food brands.

Amongst all the Amazon food, there's an Amazon Hub. 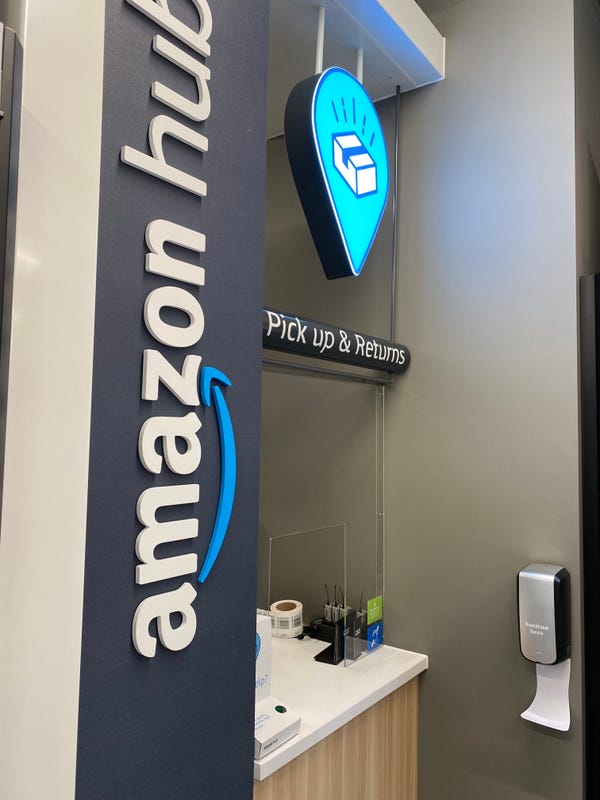 At the back of the store, you’ll find the Amazon Hub where you can pick up and return items that you’ve bought online from the retail company.

In the pharmacy section, there are coasters that you can take to the Amazon Hub to exchange for medicine. 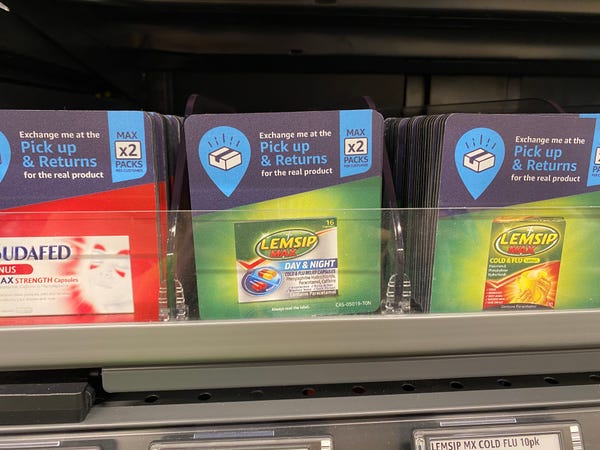 What is usually a pointing game with a cashier behind a till, is now a case of picking up a coaster and handing it into the Amazon Hub to get drugs.

The alcohol is enclosed in a corner with a 'booze bouncer' checking people's ID as they walk out. 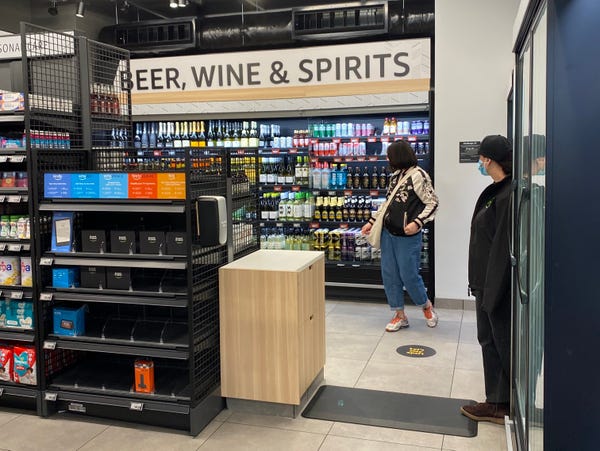 The ‘booze bouncer’ welcomed me into the alcohol corner and proceeded to watch what I put into my bag — on top of cameras watching me. I picked up a beer and on my way out, she asked to check my ID.

When I asked her if I could take a picture of the alcohol section, she told me: “Of course, lots of people are doing that at the moment.”

Given that attractions are shut due to COVID-19, the store has become a tourist magnet. There were certainly more tourists than genuine shoppers roaming around in there.

It was also noticeable that everybody in Amazon Fresh was young. This begs the question of whether older people will have the technology to shop there.

You can even get an Amazon Fresh meal deal. 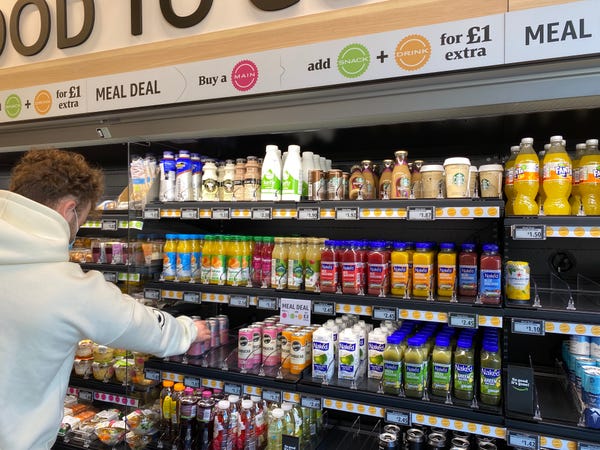 The meal deal section was huge. There’s a wide variety of meals, snacks and drinks on offer.

The meal comes at its standard price, then you add any drink and snack on top for £1. Some of the meals were really fancy, such as the lemongrass chicken and edamame mixed grain salad. 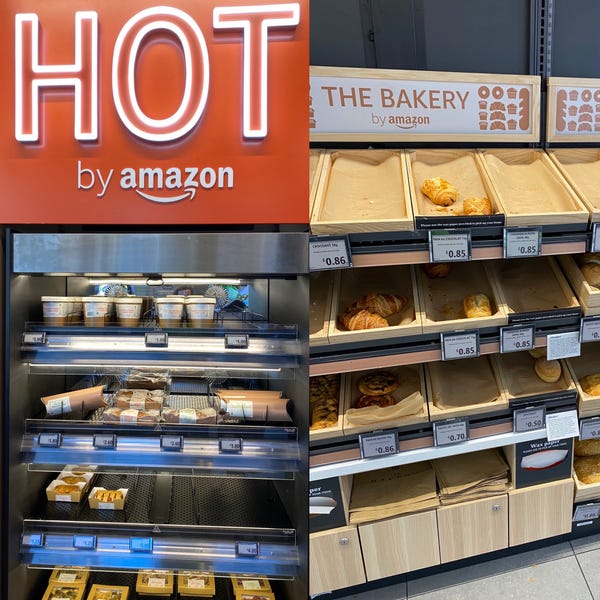 Amazon Fresh is ideal for that lunchtime food dash. There was a lot of ready-prepared food, perfect for city workers on the run.

Customers can make a cup of coffee for £2.30. Oat milk was also an option. 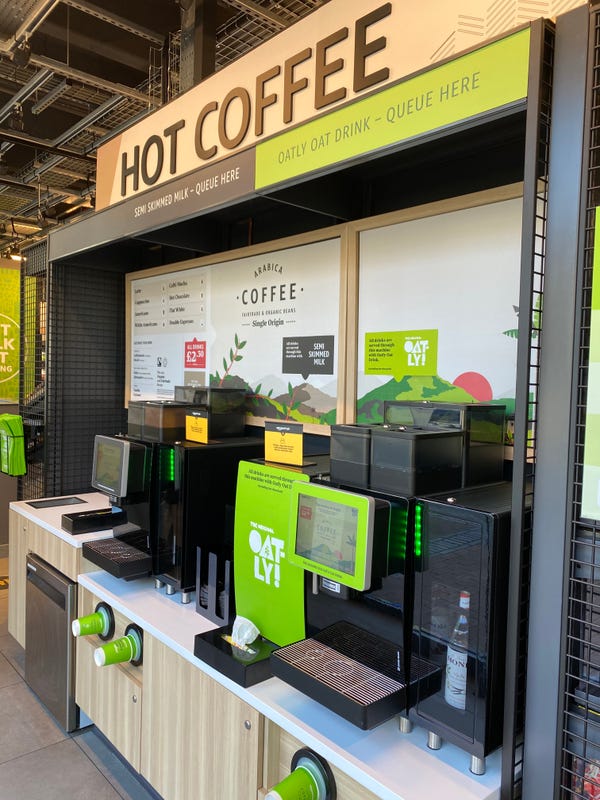 At the front of the store, there were two separate coffee machines, one for normal milk and one for oat milk.

The store itself was bright and vibrant with pop music. It felt exclusive. 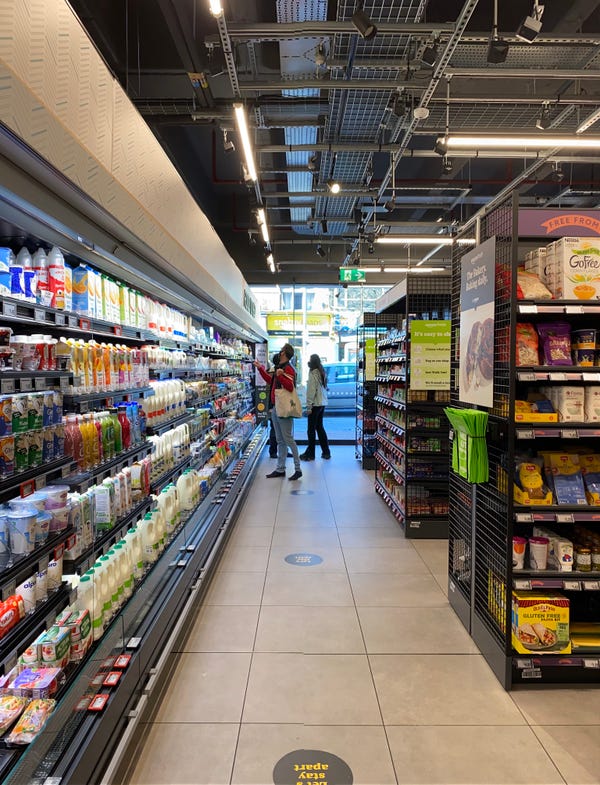 Amazon Fresh was comparable to a high-quality UK convenience store, such as Waitrose. It was clean, tidy and there was lots to choose from.

The strangest bit was walking out without having to scan the items.

My receipt was emailed to me two hours after I left the store, which I became impatient for because I was eager to know whether the technology had charged me correctly.

It did — it logged every item in the order I put them into my bag. 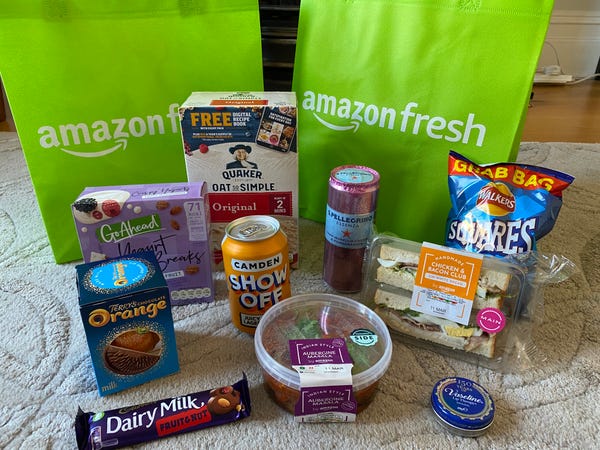 Amazon Fresh makes it too easy to buy things…