This moment in history is not lost on 22-year-old U.S. Army Spc. Jaida Thompson as she helps the U.S. military withdraw from Afghanistan, a place where American troops have been since she was a toddler.

“I feel like it’s a big mission, and I’m very grateful to be a part of it,” she told ABC News at Bagram Air Base, the U.S. military’s main hub for the removal of 2,500 troops and most of their equipment from Afghanistan.

“It’s like crazy that I get to be here to close it down and be a part of something that was here before I was even brought up,” she told ABC News Chief Global Affairs Correspondent Martha Raddatz during an exclusive visit to the air base to see the withdrawal operations taking place nearly 20 years after the Sept. 11 attacks.

“I’m glad that I get to help finish something that I didn’t get to be a part of at the start,” Thompson said.

The base is abuzz with activity as logistical troops load gear onto as many as 15 C-17 cargo flights a day, part of the 896 C-17 flights that U.S. Central Command says have removed military equipment and personnel from Afghanistan in the last two months.

A U.S. official has told ABC News that the U.S. troop withdrawal will be completed in July, months ahead of the Sept. 11 deadline set by President Joe Biden earlier this year.

While the pace of activity at the base is constant, for some service members who have spent time at Bagram over the years it is a strange experience to see it transformed. Living areas that once housed as many as 20,000 troops are now empty and the American fighter jets that took off from the base have already left the country.

“It’s a little surreal to see things very bare and empty,” said Col. Erin Miller, the commander of the Resolute Support sustainment brigade who is helping to oversee the withdrawal.

Miller, who is on her third deployment to Afghanistan, described the withdrawal operation as “bittersweet” because “you’ve had a connection to this country for 19, 20 years and now we’re taking everything out and leaving our partners here and then leaving Afghanistan, most likely for good.”

Getting all of the equipment out of Afghanistan has required a lot of effort from service members that has not gone unnoticed.

Gen. Austin Scott Miller, the top commander of U.S. forces in Afghanistan to Bagram, recently awarded the Bronze Star to 23-year-old Army Reserve Spc. Abigail Lopez who is on her first deployment.

“I put a lot of work in dedication and encouragement and I’m a very hard worker,” she told Raddatz as to why Miller presented her with the award.

Like Thompson, Lopez was also a toddler when 9/11 happened and she appreciates the history she and her fellow troops are making with the withdrawal, as well as what hundreds of thousands of American service members have accomplished before her service.

“A lot of Americans came out and did what they had to do and I feel like we accomplished that mission until now,” she told Raddatz.

Chief Warrant Officer 2 Jose Leal, who joined the Army a month before 9/11, described being in Afghanistan as the U.S. troop presence comes to an end as a “humbling experience.”

“This is part of history. And I’m pretty sure that what we’re doing here is going to go in the books,” said Leal.

He noted that pulling out of Afghanistan “was not an easy task. However, it needed to be done. And I’m very grateful and thankful for being part of it.”

Col. Mike Scarpulla, from the Army’s 10th Mountain Division who commands the base, agreed with Miller that the withdrawal operation is bittersweet but expressed confidence that Afghan security forces will be able to hold their own after U.S. troops leave.

“We’ve spent so much time here with our partners, working with them. They’re ready,” he said. “They can handle this. They’re quite capable of this.”

However, he acknowledged some hesitation that he likened to “the first time you see your child on a bike without training wheels.” 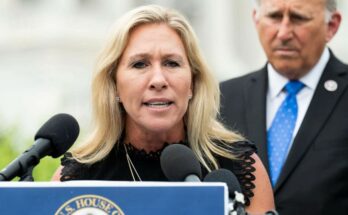