Hospitality venues across the country have embarked on multi-million dollar overseas hiring campaigns in an effort to attract talent to Australia as a dearth of international workers prompts staff shortages everywhere from high-end restaurants in Sydney to the MCG.

The parent company behind a number of prominent restaurants such as Rockpool, Spice Temple, Munich Brauhaus and The Bavarian has employed 125 recruits from the Middle East, Europe and the United States at a cost of $10,000 to $20,000 per employee in an effort to bolster languishing worker numbers locally. 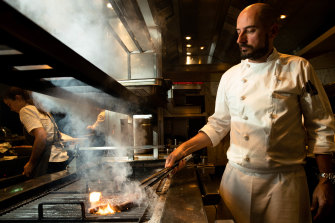 Upmarket restaurants such as Rockpool are spending millions to fly in talent from overseas.Credit:Janie Barrett

But it’s not just restaurants affected by the current international worker shortages. Delaware North, which provides catering at major sporting grounds such as the MCG and Rod Laver Arena, has been struggling to get enough staff ahead of the looming football season which kicks off with Wednesday night’s season opener between Melbourne and the Western Bulldogs.

Gary Brown, Delaware North’s Managing Director said the company would usually have around 3,000 workers on hand for a full-capacity event at the MCG, however, the business was expecting to be a few hundred people short.

“This is not a Melbourne-wide or Victoria-wide issue – it’s a nationwide and industry-wide issue that is affecting the entire hospitality industry on a never-before-seen scale,” he said.

“Hundreds of thousands of temporary visa holders left Australia over the past few years, many of them from the hospitality industry. Unfortunately, we are not yet seeing an influx of them returning, which is one of the main factors driving the current staffing shortage.”

Staff shortages across the retail and hospitality space have been a persistent issue through the pandemic, with increasing case numbers from the Delta and Omicron strains of the virus putting significant strain on the labour market through the end of last year.

International staff being hired to work at Rockpool and its stable of restaurants are set to arrive at the end of the month and will be provided with visas, airfares and temporary accommodation. They will be split equally between the company’s upmarket restaurants and more casual dining options, with chief executive Thomas Pash saying the company was setting its sights overseas as the supply of local talent had dried up during the pandemic.

“With borders reopen, restaurants reopen and a renewed appetite for dining out – plus our own plans to expand some of our key restaurant brands in the new financial year – we need to boost our resources, and international candidates are one avenue,” he said.

“Demand to dine at our restaurants is very strong and we expect it to continue.” 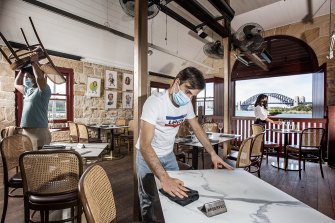 Sydney restaurateur Bill Drakopoulos, who owns The Fenwick, said he has started to knock back some reservations due to shortages.Credit:Steven Siewert

Sydney restaurateur Bill Drakopoulos – who owns Sydney venues such as Ripples, The Fenwick and Ormeggio – told The Age and The Sydney Morning Herald he was still seeing a “desperate shortage of staff”.

“I could probably do with another 70 staff,” he said. “And that’s simply because the potential overseas employees haven’t hit our shores yet, or not in decent numbers. It’s still pretty tough.”

“We’re looking for front of house and back of house – across the board. It’s just a chronic shortage. I’m optimistic it’ll come good, but it’ll take some time.”

Mr Drakopoulous said his restaurants were also scouting overseas for new talent, but it was a slow process, and in some restaurants, he had been forced to limit the number of bookings to ensure they had sufficient staff to serve customers.

Not all hospitality operators are feeling the pinch, with major pubs and bars business Australian Venue Co saying they were doing fine for staffing levels across Victoria and NSW.

However, the company has also set its sights overseas for certain roles, hoping to hire 150 chefs from international markets as part of a major hiring campaign run via targeted Facebook ads. So far, it has recruited around half that number.