Fund managers and analysts are tipping the fortunes of Australia’s struggling department store duo Myer and David Jones could rebound in the new year after the latter revealed a huge recovery in sales during December.

David Jones, which is owned by South African retailer Woolworths Holdings, revealed this week its sales for the first 26 weeks of the financial year fell 10.5 per cent on a comparable basis with a rush of Christmas shopping offsetting a horror start to the year.

It was a marked improvement on the 14.6 per cent fall the retailer reported for the first 20 weeks of the financial year giving hope to investors that rival Myer may report a similar turnaround. 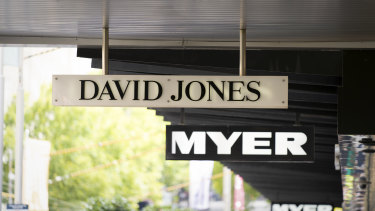 David Jones’ sales appear to have improved notably for the last six weeks of the year.Credit:Eamon Gallagher

Oscar Oberg, a fund manager at major Myer shareholder Wilson Asset Management, said David Jones’ trading update boded well for the rival department store thanks to the apparent improvement in trade across the last six weeks of the half.

“That implies DJ’s had a strong recovery in sales over the last six weeks through their key December period, which is important as that is the period department stores make all of their money,” he said.

Excluding its locked-down Victorian stores, David Jones’ total sales grew 5.9 per cent for the half, with the business’ online division contributing significantly, growing 55.5 per cent.

This growth could easily be replicated or even beaten by Myer when the retailer reveals its half-year results in February, Mr Oberg said, with the fund manager believing Myer to be the stronger performer of the two.

“I would expect Myer to be outperforming DJs because they have less of a focus in the CBD areas and have a larger online business,” he said. “Myer’s stores across the country, particularly regional ones, would be doing quite well.”

“So I would expect Myer’s sales to be better, but even if they’re the same as DJs’ that’s still going to be better than what the market thinks.”

There’s a long road ahead for Myer, their sales are still half a billion dollars off where they should be.

Analysts currently expect Myer’s sales for the full 2021 financial year to fall around 5 per cent, but its adjusted profit after tax to eke into the black at $5 million, a stark improvement on the $13 million loss it posted in 2020.

This improved optimism surrounding the stock has been reflected in a gradual re-rating by analysts, with CLSA’s Mark Wade recently upgrading his price target on the stock to 31 cents. Short interest in the company has also fallen significantly, with around 7 per cent of investors currently short, compared to nearly 15 per cent in May last year.

If Myer does reveal a better-than-expected result come February, all eyes will likely turn to majority shareholder Solomon Lew, who has ramped up his attacks against the company’s board and hinted he may be preparing to again lobby shareholders for a potential takeover.

However, a better-than-expected showing for Myer at its upcoming half-yearly results is unlikely to take the pressure off the company, Mr Oberg believes, as the department store still has a long way to go in its recovery.

“There’s a long road ahead for Myer, their sales are still half a billion dollars off where they should be,” he said. “We’ve got to look at Myer objectively as to where the business sits post the pandemic.”