Big box retail manager HomeCo says it is on track to exceed its float forecasts as it upgraded its expected funds from operation for the full year by 10 per cent on the back of an expanded tenancy base and the imminent creation of a new healthcare fund.

The improved outlook, flagged in its maiden result as an ASX-listed company, will be a boost for its heavyweight investors, which include former UBS Australia head Matthew Grounds, the Oatley Family, John Symond, Spotlight co-owner Zac Fried and billionaire Marc Besen. 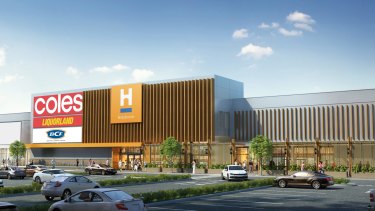 The group, which listed in mid-October, booked a $12.4 million loss, with pre-float costs weighing on its result.

HomeCo said it expects to top by 10 per cent the $15.17 million in funds from operation for the full year it forecast at the time of its IPO, which is the most relevant measure for a real estate investment trust.

HomeCo chairman and chief executive David Di Pilla is the largest shareholder in the group, with a 15.9 per cent stake.

Mr Di Pilla, a former UBS banker, said the improved earnings outlook was based on the 12,000 square metres of new leases signed over the past few months, of which 40 per cent were in the services and food sectors.

HomeCo is focussed on "hyper convenience" retail tenants, such as Amart Furniture, Spotlight and Nick Scali, with 70 per cent of the portfolio focussed on daily need suppliers and outlets not exposed to the threat of e-commerce such as fitness centres, medical centres and child care operators.

HomeCo was established from the remains of failed hardware chain Masters, with many of its sites acquired from the Woolworths joint venture. Its portfolio, valued at almost $1 billion, consists of 21 operating centres and nine development projects, which it will look to expand to "add long-term shareholder value".

"HomeCo is on track to execute its strategy to deliver above average risk-adjusted returns and remains focussed on setting up a platform for sustainable long-term growth via the own, develop and manage model," Mr Di Pilla said.

As part of the growth strategy, HomeCo is adding new capital to a selection of existing assets and is considering the establishment of a new healthcare and wellness REIT.

There is also a new partnership with Aurrum Childcare to lease six childcare centres from HomeCo, which are expected to be rolled out in the coming two years, taking the total HomeCo childcare portfolio to 12 centres.