A Kimberley environmental group has called on mining magnate Andrew Forrest to offload his gas assets after he announced Fortescue Metals Group would embark on a major journey to become one of the world's biggest producers and financiers of renewable energy. 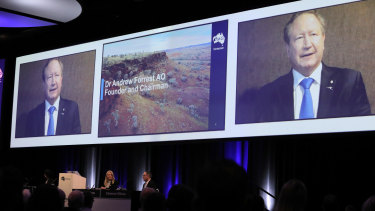 "Given Dr Forrest is taking heed of the science of climate change and recognising this is a serious threat to the world, we are calling on him to stop exploring for fossil fuels in the Canning Basin region of the southern Kimberley," Mr Pritchard said.

"Dr Forrest cannot expect to be credible by talking, on the one hand, about renewable energy being the future while still exploring for oil and gas in the Kimberley."

However, Squadron still has interests in the future Port Kembla gas terminal in NSW and is involved in a gas exploration joint venture with Goshawk Energy across in Kimberley, which Mr Pritchard said did not match with the commitment to tackle climate change.

"There’s an inconsistency in what Dr Forrest’s company Squadron Energy is saying versus what they are doing," he said.

"Dr Forrest is clearly passionate about the marine environment but more oil and gas being burnt is going to lead to more bleaching events on the Great Barrier Reef, Ningaloo Reef, as well as Kimberley coral reefs.

"It’s clear he wants to be a global leader in renewable energy, he’s got the money to do it, but he’s not going to be taken seriously if he’s going to continue to look for new oil and gas deposits."

"After scientific and personal analysis of the renewable energy resources of our little planet, I can assure you that there is more than enough renewable energy to sustainably and economically supply every person on this planet from this time forth," he told shareholders on Wednesday.

"When we as Fortescue, the pioneer, can really lead the way of large volume, low-cost, green hydrogen and green ammonia shipped around the world, then you'll see others join and you will begin to see the commercial driving end of climate change."

Marijuana stocks in focus after House votes to decriminalize cannabis