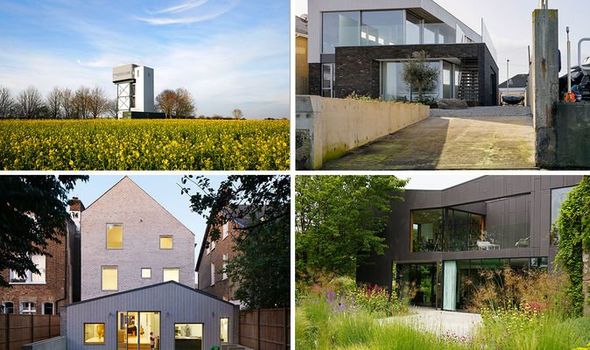 Grand Designs presenter Kevin McCloud was joined by architect Damion Burrows and design expert and writer Michelle Ogundehin to explore five homes across the country that are battling it out to be included on the RIBA shortlist. Each week, the experts will be exploring homes in four distinct categories. This week, Kevin, Damion and Michelle viewed homes that “take us by surprise”. Kevin said: “These are buildings that make you sit up and take notice. That jolt you out of the humdrum of everyday life. Some jump out at you like brash friends that you lost contact with many years ago.

“Others just tap you on the shoulder quietly but brewing with eccentricity.

“Be they mansions, maisonettes, water towers or beach houses – these are all homes that refresh and invigorate.”

In later episodes, Kevin will be visiting homes that use materials in “new and beautiful ways”, houses that “solve problems” and homes that “reinvent our favourite types of buildings”.

Each week Kevin will unveil which houses the RIBA judges have put through to the shortlist.

The final episode will reveal the overall winner.

Tonight’s episode included a 1960s-inspired water tower, a beach house, a house within a house, Grade-II listed fortress and a farmhouse with a space-age extension.

The 1960s-inspired water tower in Norfolk

Designed by Tonkin Liu, this Thunderbirds-like water tower was the passion project of photographer Dennis and consumer designer Misa.

Misa and Dennis managed to create a 1960s-inspired tower with a “control room” living space and a remarkable spiral staircase.

The very top of the water tower has a giant roof terrace while the old water tank itself is an open-plan kitchen/diner.

Two double bedrooms with ensuite bathrooms and large glass windows are located further down the property and a garden room is situated on the ground floor.

While the home looks luxurious and modern, the property’s location might put off some individuals.

Dennis said it’s a “very exposed spot” where they are constantly exposed to the elements.

He said: “When the wind is up that strong, the rain is usually coming with it and it’s horizontal.

“You are splashed about and blown about in every direction. You’re really in there.”

“It does wobble about in the wind,” he added.

To keep the property anchored, they used an “ingenious piece of engineering” – a staircase.

The whole space is connected by the incredible staircase which was fashioned from 132 individual blocks of “super-strong, cross-laminated” timber.

“Piled one upon another, they form a giant corkscrew that helps pin the tower to the ground.”

The RIBA judges described the property as “delightful” and especially liked the home’s floor-to-ceiling windows and the roof.

DON’T MISS
Kevin McCloud spills Grand Design filming secrets [INSIGHT]
Kevin McCloud health: ‘I would have been carried out in a box’ [UPDATE]
Grand Designs tests strength of family bond as they clash over tree [ANALYSIS]

Located in suburban south London, this property looks slightly unusual next to the rest of the Victorian homes lining the street.

However, there’s a good reason this home stands out among the crowd.

The architect built a building around an existing two-storey 1950s home that was originally constructed to replace a home that was damaged during World War Two.

The property stands out with dove-grey bricks and a sharp, angular roof.

“Michelle and Dan have done something both surprising and extraordinary with it,” Kevin said.

The house is home to Michelle and Dan and their five boys.

The first floor has three bedrooms and the top floor has a master bedroom and two children’s rooms.

The shell of the property cleverly insulates the 1950s building.

“Then, they employed a timber frame to build an extra floor.”

The home has been beautifully decorated with slick, contemporary finishes, oak floors and neutral colours.

The judges liked the property’s exposed timber rafters which are both practical and attractive and commended the addition of the “thick, new warm coat to the poorly insulated original house”.

Located in Cumbria, this 14th-century fortress with a contemporary interior is a real surprise.

The Grade-II listed property was built by Katie Woollacott and Patrick Gilmartin who loved the romance of working with a 14th-century tower.

Patrick said: “For me, something about a tower, it brings out the child in you, you want to climb it.

“You want to explore it, you want to discover things and be surprised by it.”

Different parts of the house were actually built at completely different times.

The central section was originally two halls from the 15th century.

The boot room, sitting room and kitchen are downstairs whole the living room and bedrooms are upstairs

The oldest part, built in the 14th century is the Pele tower itself which now houses a library, bedroom and bathroom.

Katie said one of the challenges was not making the property “gloomy” but ensuring there was enough light to make it “uplifting”.

Kevin said a master bedroom and luxurious modern bathroom have been “cleverly slipped inside” the ruined shell of the tower itself.

He added: “The stitching together of ancient and modern is just as inventive elsewhere.

“None of which jar thanks to Patrick and Katie’s commitment to traditional materials and craftsmanship.”

The judges commended Patrick and Katie for sensitively modernising the tower while holding on to the history.

This sleek beach house is located right next to a busy boat yard on Hayling Island.

The property was built by John Pardey Architects and includes sharp angles and floor-to-ceiling windows that face directly towards the ocean.

This home is luxurious with a pool set into the garden and the ocean literally steps away.

The incredible property is home to Simon and Lisa, who worked in public relations and the furnishings trade, and their three children.

The house is what is known as an “upside down house” with three bedrooms, a wet changing room and a family room downstairs and a master bedroom and a kitchen, dining and living space upstairs.

Kevin said the first floor is “designed to dazzle you with a panorama”.

He described the property as “very glamorous”, “desirable” and “sleek”.

Despite its contemporary finish, the property has been fashioned from “rough, plain materials”.

The white modern kitchen has a mirrored splashback which Kevin said must be a “nightmare” to keep clean.

“But it’s not because you can see the marks,” said Lisa.

The mirror works as a “trick” which means wherever you look, you get a “busy, engaging” view outside.

The House on the Hill

Located in the Welsh borders, this half traditional Georgian farmhouse and half space-age build is a surprise from the offset.

The property includes minimalist surfaces and angles and Georgian features.

The hold part of the house has a triple height art gallery, two bedrooms and a study.

Downstairs in the new west wing is a kitchen and dining area that evolves into a comfortable living space.

Upstairs there are two ensuite bedrooms and an office which has a balcony.

The property was designed by architect Alison Brooks.

The house is a temple of light with white walls, lots of windows and lots of open-plan living.

Everything in the house is at an angle rather than straight.

The judges praised the skewed geometry which leads the eye and then gently leads you onto explore new parts of the building.

Alison said: “There are at least three ways of seeing out in every room in the house.

“There’s at least two windows and a roof light, or at least three windows pointing in different directions, so that every space in the house is able to capture light at different times of the day.”

Grand Designs: House of the Year starts on November 17 at 9pm on Channel 4